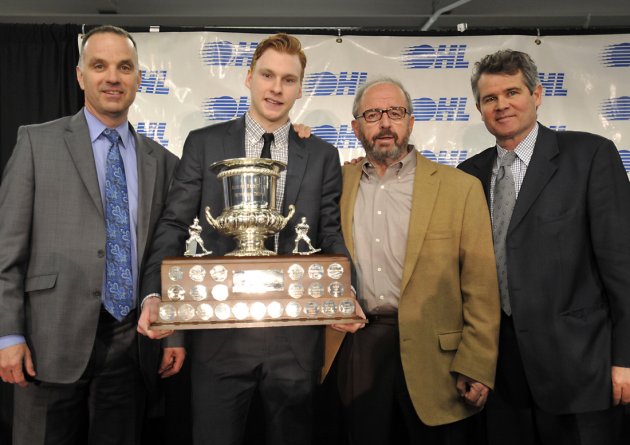 Toronto, ON – The Ontario Hockey League today announced that Toronto Maple Leafs prospect Connor Brown of the Erie Otters is the 2013-14 recipient of the Red Tilson Trophy awarded to the OHL’s Most Outstanding Player of the Year as voted by the writers and broadcasters that cover the league.

Brown captured the Eddie Powers Memorial Trophy as the league’s Top Scorer setting a franchise record with 128 points in 68 games including 45 goals and 83 assists leading the Otters to their best season in team history with 52 wins and 106 points.

“This is such a prestigious award,” Brown said. “So many great players have won this before me and it is an honour to be mentioned among those names. This honour makes my family and I very proud to see a lot of hard work pay off.”

Brown became the first member of the Otters to win the league’s scoring title, and is the second Otter to earn the Red Tilson Trophy following Brad Boyes who won back-to-back honours in 2001 and 2002.

“This is a special award for a very special person,” said Otters’ Governor and GM Sherry Bassin. “This is a reward for someone who is extremely dedicated and committed to his goals and the team’s. Connor is an example to anyone who joins this league that if you have a dream and you are prepared to commit yourself to that dream, good things will happen. He is an extremely deserving young player who helped reestablish the Erie Otters as a team to beat.”

The 20-year-old Toronto native was selected by the Leafs in the sixth round of the 2012 NHL Draft.  Signed to a three-year entry-level contract by the club in November, Brown joined the AHL’s Toronto Marlies following the Otters playoff run to the Western Conference Finals.  15 former Toronto Maple Leafs have earned the Red Tilson Trophy including Leafs’ honoured players and Hockey Hall of Fame members George Armstrong (Stratford 1948 and Marlboros 1950), Frank Mahovlich (St. Michael’s 1957), and Doug Gilmour (Cornwall 1983).

“It is a tremendous accomplishment for Connor to win the OHL’s Player of the Year award,” said Leafs’ Vice President of Hockey Operations Dave Poulin. “As captain of the Otters, he was instrumental in helping his team finish second overall in the OHL with 106 points during the regular season. Connor is a player that has continued to improve each season and this recognition speaks volumes about his development as an NHL prospect.”

Brown was selected by the Otters in the 13th round, 251st overall, in the 2010 OHL Priority Selection from the GTHL’s Toronto Marlboros.  He played three full seasons with the club competing in 199 career games producing 98 goals and 152 assists for 250 points.  A first team All-Rookie in 2012, Brown recorded 53 points in his first season followed by 69 points as a sophomore in 2013.  During his final OHL season he shattered his previous offensive totals with a 59-point increase to match the Otters’ improvement in the standings from 47 points in the Midwest Division last season to 106 in 2014.

The Otters’ captain also earned the Jim Mahon Trophy as the league’s Top Scoring Right Winger.  His performance on the power play was top among all OHL players leading the league with 20 goals and 34 assists with the man advantage and recorded 39 multi-point games this season while his plus-44 rating was among the league leaders.  A two-time Player of the Week this season, Brown represented Team OHL in the 2013 SUBWAY Super Series and also earned OHL Player of the Month honours in January highlighted by a career-high six-point game on January 12 with two goals and four assists as second star of a 9-0 win over the Windsor Spitfires helping teammate Dane Fox reach the 50-goal milestone.  Brown was recognized in the annual Western Conference Coaches Poll as the Best Shootout Shooter, second Best Penalty Killer, and third Smartest Player.

The Red Tilson Trophy is the most prestigious individual award presented by the Ontario Hockey League.  Accredited media were asked to select their top three choices from the 20 nominees submitted by all 20 member clubs.  Players received five points for a first place selection, three points for second place and one point for a third place selection.

In over 80 ballots collected, Brown received 321 points in the voting process receiving first place votes on over 73% of all ballots.  Philadelphia Flyers prospect Scott Laughton of the Oshawa Generals finished second in the voting with 120 points, followed by NHL Draft prospect Sam Bennett of the Kingston Frontenacs with 68 voting points.

Brown will be the OHL’s nominee for the Canadian Hockey League Player of the Year Award presented at the CHL Awards Ceremony during the 2014 MasterCard Memorial Cup in London.  He will be formally presented with the Red Tilson Trophy at the annual OHL Awards Ceremony on Tuesday June 3.