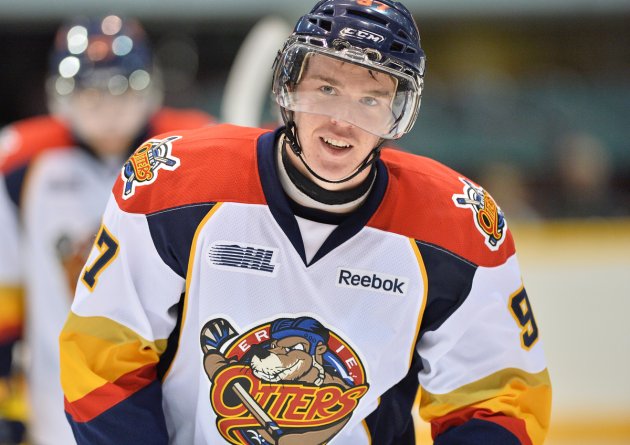 Toronto, ON – The Ontario Hockey League today announced that Connor McDavid of the Erie Otters is the 2013-14 recipient of the William Hanley Trophy awarded to the OHL’s Most Sportsmanlike Player of the Year.

McDavid finished fourth in league scoring with 99 points in 56 games played tallying 28 goals and 71 assists with a plus-minus rating of plus-47.  He also recorded just 20 penalty minutes which was the lowest amount for any player listed among the top 12 scorers.

“It’s a tremendous honour to win this award,” McDavid said. “It’s really important to me to be respectful on the ice and there’s a reward for that.”

The Newmarket, ON, native becomes just the third player in OHL history to win the award in their 17-year-old birth year following NHL greats Kirk Muller of the Guelph Platers in 1983, and Wayne Gretzky of the Sault Ste. Marie Greyhounds in 1978.  McDavid is also the second Otters’ player to win the award following Brad Boyes who won back-to-back in 2001 and 2002 during the club’s championship season.

“This is an example of great players doing great things within the rules of the game,” said Otters’ Governor and GM Sherry Bassin. “Everyone involved in this game knows what a superstar this young man is, but Connor stays humble throughout. His mentality is to get things done, and get them done the right way. This honour is a credit to Connor. He carries special ability, but more importantly he is a special person with such high character.”

Selected first overall in the 2012 OHL Priority Selection, McDavid earned OHL Rookie of the Year honours last season after becoming the third player in OHL history to be granted Exceptional Player status.  This season he was named OHL Player of the Month for October highlighted by an 11-game assist streak from October 5 to November 2 which tied teammate Andre Burakovsky for the longest streak in the league this season.  His 71 assists were second only to teammate Connor Brown and helped him earn the distinction of Best Playmaker in the OHL’s Western Conference Coaches Poll also finishing first in the Best Skater and Best Stickhandler categories.  McDavid is eligible for the 2015 NHL Draft and was a member of Canada’s National Junior Team this season.

McDavid will be presented with the William Hanley Trophy at the 2013-14 OHL Awards Ceremony set for Tuesday June 3 at the Hockey Hall of Fame in Toronto.  He will also be the OHL’s nominee for Sportsman of the Year at the Annual CHL Awards held as part of the MasterCard Memorial Cup festivities on Saturday May 24 in London.