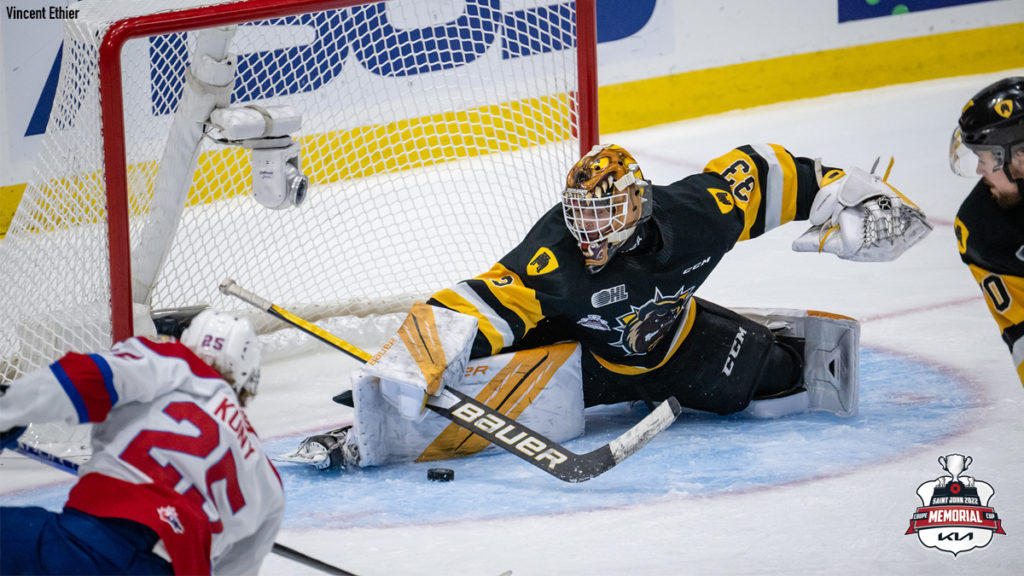 With the victory, the Bulldogs advance to Monday’s Semi-Final where they will face either the host Saint John Sea Dogs or the QMJHL champion Shawinigan Cataractes. For the Oil Kings, the club closes out the tournament with a 0-1-0-2 record, one point behind the Bulldogs.

“I thought this was our best game of the tournament and that we were more engaged,” Oil Kings head coach Brad Lauer said postgame. “We had more purpose to our game and generated lots of opportunities but unfortunately didn’t finish on them.”

Added Oil Kings captain Jake Neighbours, “I thought it was the best game of the tournament for us. We couldn’t finish early … I have a wide open net there, I have to finish, and there were some other chances that could have gone in. It’s tough to look back on it immediately but a lot of things could have went differently, but at the end of the day it’s over.”

With the Bulldogs carrying a 2-0 lead into the third period after a pair of first period powerplay markers courtesy of Avery Hayes and Ryan Winterton, among the other top performers on Friday came in the blue paint where star netminder Marco Costantini dazzled with a 40-save performance.

Finally cracking Costantini in the third period, the Oil Kings got on the board with a shorthanded tally courtesy of Chicago Blackhawks draftee Jalen Luypen. A flurry of action then decorated the scoresheet in the final frame, first seeing the Bulldogs regain their two-goal edge on a perfect shot from Anaheim Ducks first rounder Mason McTavish before Neighbours tipped home a deflected point shot with less than three minutes remaining.

With the Bulldogs requiring a regulation win to avoid elimination, all hands were on deck in the final moments, with the club ultimately prevailing 4-2 backed by a McTavish empty netter with a single second left on the clock.

“It was a great effort. We got fantastic goaltending. It was one of the best games I have seen ‘Cossy’ play, and I have seen him play a lot of good games,” said Bulldogs head coach Jay McKee postgame. “It was just a gritty effort all around.”

The round-robin schedule of the 2022 Memorial Cup presented by Kia concludes Saturday between the Sea Dogs and Cataractes.

BULLDOGS BITES: Hamilton lost star defenceman Nathan Staios to injury in the second period and he didn’t return to the game … following review, a last second empty net goal was credited to Mason McTavish, giving him two goals and an assist in the game … Hamilton went 2-for-3 on the power play, pushing them to 5-for-9 in the tournament.