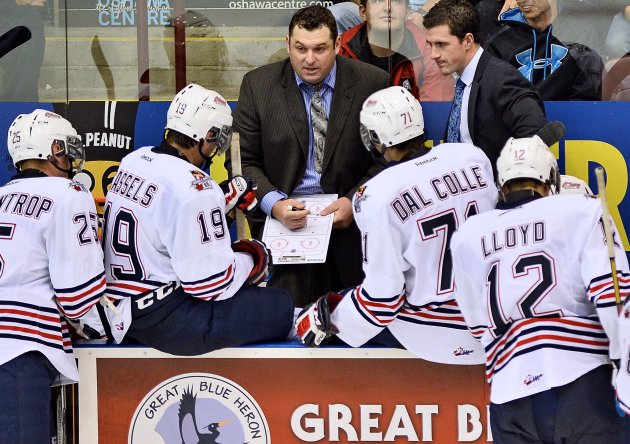 Toronto, ON – The Ontario Hockey League today announced that D.J Smith of the Oshawa Generals is the 2013-14 recipient of the Matt Leyden Trophy awarded annually to the OHL’s Coach of the Year.

In just his second season behind the Generals’ bench, Smith guided the club to their first East Division title since 1990-91 with their best regular season record in that span finishing the 2013-14 campaign with 90 points (42-20-0-6) atop the Eastern Conference standings.

“It is a great honour for me to win this award, it is less about winning the award and more about the respect given from other coaches and GM’s around the league,” Smith said. “I owe this honour to Generals’ Governor Rocco Tullio for giving me the chance to be a full-time head coach in the Ontario Hockey League and to General Manager, Jeff Twohey, for believing in me and allowing me to coach. This team isn’t coached by just me, even though I am the recipient of this award, I owe it to assistant coaches Paul McFarland and Roger Hunt who are two outstanding coaches and have helped me become the coach I am today.”

Smith becomes the first Generals Head Coach to win the award since Paul Theriault during the 1986-87 season.  Other Generals to win the award include Bill White in 1977-78, and Gus Bodnar in 1971-72 which was the first year the Matt Leyden Trophy was ever presented.  Leyden, an Oshawa native and former manager of the Generals was involved with the club for over 50 years.  He was also past President of the Ontario Hockey Association from 1965-67 and was honoured as a lifetime member of the OHA in 1972.

“D.J deserves this award,” said Generals’ GM Jeff Twohey. “Everyone works hard because of D.J, he is a great coach and a lot of our success is because of D.J and the way he coaches this team. This is an award that not only D.J is proud of but also the whole Oshawa Generals organization is extremely proud of.”

Prior to joining the Generals in 2012-13, the 36-year-old served as an Assistant and later an Associate Coach with the Windsor Spitfires from 2005-2012.  During that span the club earned two OHL Championships and two MasterCard Memorial Cup titles.  Smith played his OHL career for his hometown Spitfires from 1994-97 and was a second round pick of the New York Islanders in the 1995 NHL Entry Draft.  The defenceman spent most of his professional career in the AHL from 1997-2004 including  five seasons with the St. John’s Maple Leafs before finishing his career as a member of the Hershey Bears.  He also appeared in 45 NHL games between the Toronto Maple Leafs and Colorado Avalanche.

“All of the guys in the room are extremely proud of D.J,” said Generals’ captain Josh Brown. “He is the best coach I have ever had. He gave me the chance to play a lot of minutes this season and had a lot of faith in me. Everyone loves Smitty as a coach, he gets it, we can approach him about anything and he will always be willing to talk to us and help us no matter what the situation is. This is a great honour for him and I couldn’t think of anyone else who deserves this more than D.J.”

The Matt Leyden Trophy is voted on by the member teams of the Ontario Hockey League. In a first round of balloting, teams vote for the top coaches, within their own conference. The top three nominees from both the Eastern and Western conferences are declared as finalists. A second round of voting is then conducted on a league wide basis where teams vote for any of the six finalists. At no time during the voting can a team vote for their own candidate. Coaches receive five points for a first place vote, three points for a second place vote and one point for a third place vote.

Smith will be formally presented with the award at the 2013-14 OHL Awards Ceremony taking place Tuesday June 3 at the Hockey Hall of Fame in Toronto, and will also be the OHL’s nominee for the Canadian Hockey League Coach of the Year.

Connor McDavid, Erie Otters (Most Sportsmanlike Player of the Year)

Goaltender of the Year, TBA

Defenceman of the Year, TBA

Academic Players of the Year, TBA

Humanitarian of the Year, TBA