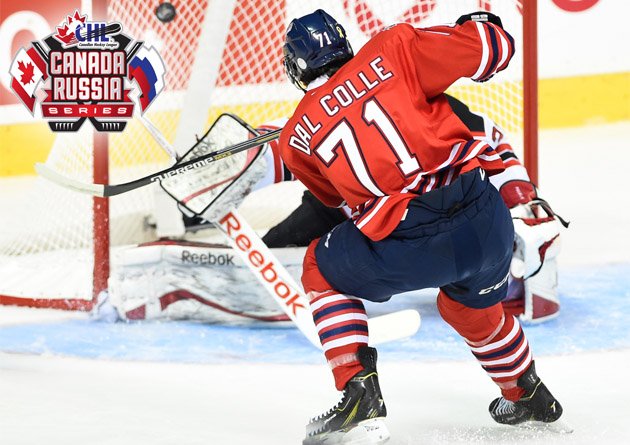 Michael Dal Colle is in the hunt for a World Junior Hockey Championship gold medal to add to his already accomplished major junior hockey resume that includes an OHL championship, a MasterCard Memorial Cup title and an Ivan Hlinka Memorial Tournament gold medal.

His first objective is to make the cut.

Back for his third tour of duty in the CHL Canada Russia Series, Dal Colle is putting his best foot forward in this, his final shot at competing in the World Junior Hockey Championships that get underway in Helsinki, Finland next month.

“Time flies,” the 6’2″, 190Ib winger said with a laugh, “It feels like yesterday I was in my first year playing in this event back in Oshawa. All of the guys on this roster are leaders and key pieces of their OHL teams, but it’ll be cool to be one of the more experienced guys in the group.”

The New York Islanders first round pick in 2014 got off to a slow start this season, failing to find the back of the net in his first 12 games. He’s been hot of late though, regaining his offensive touch alongside fellow 19 year-old flank Joe Manchurek and 17 year-old rookie pivot Domenic Commisso. With goals in each of his last five games, Dal Colle seems to be heating up at the right time.

“I think it took everyone a little bit of time to get adjusted after we flipped the switch following last season’s incredible ride,” he said. “My linemates and I have found some chemistry over the past two weeks and I want to stay in this groove to try and help us stay competitive in the East.”

The Generals have played to a 9-10-2-1 record, a stellar mark considering the 15 newcomers in the lineup that weren’t a part of their MasterCard Memorial Cup championship squad back in the spring.

Having been named the club’s captain by new head coach Bob Jones, Dal Colle is embracing his growing responsibilities as a leader and role model.

“As a young guy in this league I had the opportunity to learn from one of the best in Boone Jenner, and then last year Josh Brown was really a rock as the captain of our team. They both really set a precedent on and off the ice. We have a rich history in Oshawa and it’s a real honour to wear the ‘C’. Now I’m trying to pass on what I’ve learned to our younger guys.”

While competition for spots up front is fierce, Dal Colle is primarily focused on setting his mind to doing the things that make him an effective player as he aims to represent his country a month from now.

“I’ve worked really hard on developing my two-way game,” he said. “I want to be good at both ends of the ice and it’s an area of my game that I’ve really tried to grow as I try and reach the next level of my career. Playing a two-way game and aiming to generate scoring chances every time I hit the ice is what I set out to do every shift.”

While there’s some added pressure involved, Dal Colle sees the task set before him as a straightforward one.

“On a big stage like this, you have to be doing the things that have brought you success to this point in your career. It’s another game, another chance to show people what you’re capable of.”

Dal Colle takes the ice in Windsor tonight on Sportsnet Ontario, West and Sportsnet ONE in Game 4 of the CHL Canada Russia Series at 7:00pm ET.

For more information including how to purchase tickets please visit http://canadarussia.chl.ca.