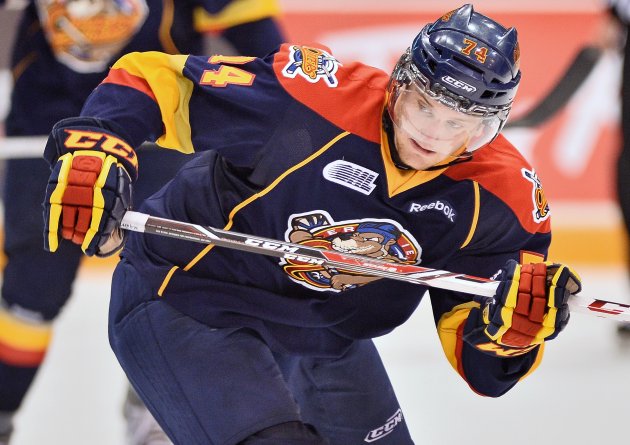 Toronto, ON – The Ontario Hockey League today announced that forward Dane Fox of the Erie Otters is the 2013-14 recipient of the Leo Lalonde Memorial Trophy awarded annually to the OHL’s Overage Player of the Year.

Fox finished second in league scoring behind teammate Connor Brown with 107 points in 67 games played including a league-high 64 goals along with 43 assists.  He becomes the second member of the Otters to win the award following Cory Pecker who earned the honour in the club’s 2001-02 championship season.

“I’m pretty overwhelmed and honored to receive this award,” Fox said. “There were a lot of great players up for this. I am pretty excited to be taking this home, but I am still focused on the main goal. I want to win a championship in my final OHL season, that’s the trophy I want.”

A 20-year-old from Thamesville, ON, Fox played five OHL seasons beginning with the London Knights who selected him in the third round of the 2009 OHL Priority Selection.  He joined the Otters midway through the 2011-12 season and has played in a total of 243 career OHL games recording 118 goals and 108 assists for 226 points.  2013-14 was a breakout season for Fox shattering all previous offensive bests while posting a 71-point increase over last season’s total helping the free agent sign an entry-level contract with the NHL’s Vancouver Canucks in December.

“When we traded for Dane Fox, there were a lot of people who questioned the move,” said Otters’ Governor and GM Sherry Bassin.  “I think Dane more than proved what we were doing. This award is a great credit to him and this organization. Seeing what he’s accomplished, we are thrilled for him. This is another example of players never giving up.”

Named OHL Player of the Month for November, Fox tied for first in the OHL with 11 game-winning goals and had a 10-game goal scoring streak from November 13 to December 14 that was also tied for longest in the league this season.  Voted by Western Conference Coaches as Most Dangerous in the Goal Area and having the Best Shot, Fox had 33 multi-point games this season including two five-point games.  His 64 goals are the most scored in the OHL since John Tavares scored 72 in 2007 and is also a new Otters franchise record surpassing Pecker’s 53 goals back in 2002.

Fox was nearly the unanimous choice for the award receiving 93 of a maximum 95 points in the voting process.  Barclay Goodrow of the North Bay Battalion finished in second place with 34 voting points, while Tyler Gaudet of the Sault Ste. Marie Greyhounds finished in third place with 30 voting points.

Fox will be formally presented with the Leo Lalonde Memorial Trophy at the 2013-14 OHL Awards Ceremony scheduled for June 3 at the Hockey Hall of Fame in Toronto.