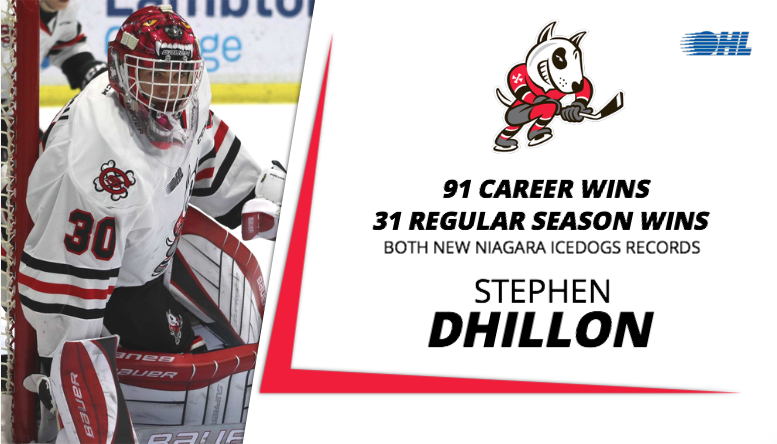 Stephen Dhillon was flawless on Saturday, turning aside 31 shots for his fourth shutout of the season as the Niagara IceDogs blanked visiting Peterborough 5-0.

Dhillon also made franchise history in his team’s third straight triumph, earning his 90th career victory to surpass Mark Visentin (2008-12) for the most wins by a goaltender in IceDogs franchise history.

A day later, Dhillon amended the record books once again, setting a Niagara IceDogs record for wins in a season with his 31st. Dhillon posted his second of back-to-back shutouts, making 21 saves in a 9-0 road win over the Owen Sound Attack to surpass Visentin who twice won 30 games in both the 2011 and 2012 seasons.

Congratulations to our guy between the pipes 🥅 Stephen Dhillon, who became the winningest goaltender in Niagara IceDogs franchise history, with 90 career #OHL wins! pic.twitter.com/ysYErXhyja

With his next win, Dhillon will surpass Andrew Loverock (2006-10) for the most single season victories in IceDogs all-time franchise history.

Dhillon, who earlier this season set a franchise record for games played, improved to 31-10-7-0 with a 2.94 goals-against average, a .911 save percentage and five shutouts over 50 games.

Over parts of five OHL seasons, the 20-year-old product of Buffalo, NY has played to an overall mark of 91-63-17-9 with a 3.22 goals-against average, a .908 save percentage and eight shutouts over 189 regular season contests.

Though he remains without a pro contract, Dhillon has attended past NHL training and development camps with Detroit, Montreal, Pittsburgh and St. Louis.