DiPietro and Robertson named CHL Top Performers of the Week 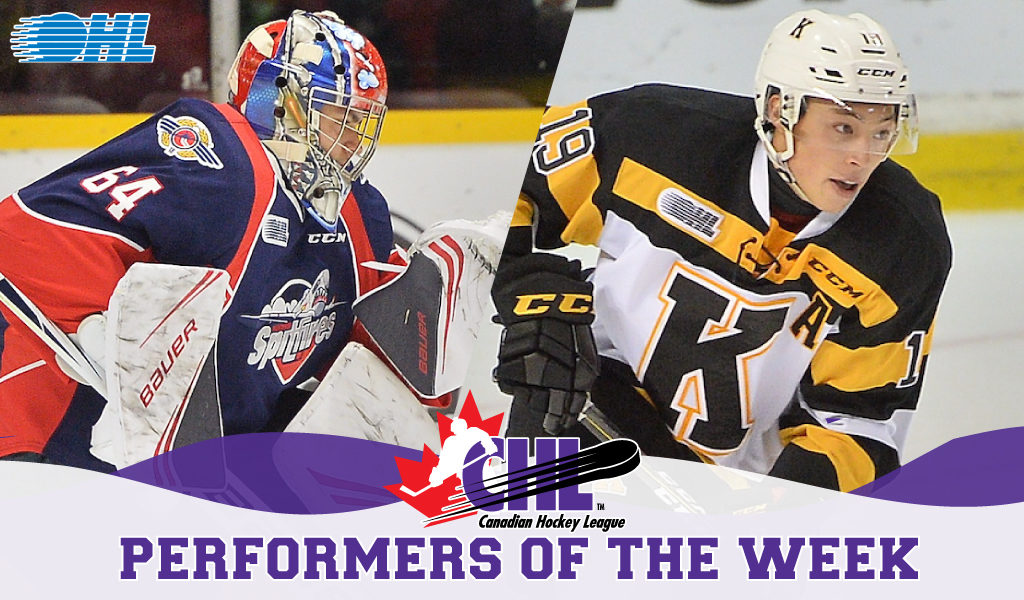 OHL standouts Jason Robertson of the Kingston Frontenacs and Michael DiPietro of the Windsor Spitfires have been named CHL Top Performers of the Week. Here’s a closer look at their latest performances.

Dallas Stars prospect Jason Robertson of the Kingston Frontenacs is the CHL Player of the Week for the regular season week ending November 11 scoring nine points in three games with six goals and three assists.

Robertson continued scoring at a goal-per-game rate last week with two hat-trick performances including last Wednesday morning in a School Day road game against the Ottawa 67’s and Saturday night at home against the Oshawa Generals.  Both contests turned into four-point efforts with an assist added in each to give him second star recognition in the 6-4 loss to Ottawa and first star honours in the 5-1 win over Oshawa.  Robertson also chipped in an assist in Friday’s 2-1 loss to the Hamilton Bulldogs.

A 19-year-old from Northville, Michigan, Robertson is playing in his fourth season with the Frontenacs who made him a fourth round choice in the 2015 OHL Priority Selection.  This season he’s produced 22 goals and 11 assists for 33 points in 22 games which has him ranked seventh in OHL scoring contributing to almost 58% of the team’s total offense.  Robertson was a second round pick by the Stars in the 2017 NHL Draft.

Vancouver Canucks prospect Michael DiPietro of the Windsor Spitfires is the Vaughn CHL Goaltender of the Week for the regular season week ending November 11 after posting a 2-0-0-0 record along with a goals-against-average of 0.96 and save percentage of .969.

DiPietro began the week representing the CHL in the CIBC Canada Russia Series where he made 18 saves to backstop Team OHL to a 3-1 victory on Thursday night in Sarnia.  In league play he helped the Spitfires extend their winning-streak to four games stopping a total of 62 shots.  31 of those saves came on Saturday in a 2-1 shootout victory against the Guelph Storm where he also stopped six straight attempts to help secure the win.  His week wrapped up Sunday with 31 saves as part of a 7-1 win against the Saginaw Spirit.

A 19-year-old from Amherstburg, Ont., DiPietro is playing in his fourth OHL season after being chosen by his hometown club in the second round of the 2015 Priority Selection.  He helped the Spitfires capture the 2017 Memorial Cup on home ice and was named the 2018 OHL Goaltender of the Year.  This season he carries a 7-5-0-1 record and ranks second in OHL goals-against-average with a mark of 2.18 while his .926 save percentage is also among the league’s leaders.  DiPietro is the Spitfires all-time wins leader with 82 over his career and his 16 shutouts are tied for the OHL’s all-time mark.