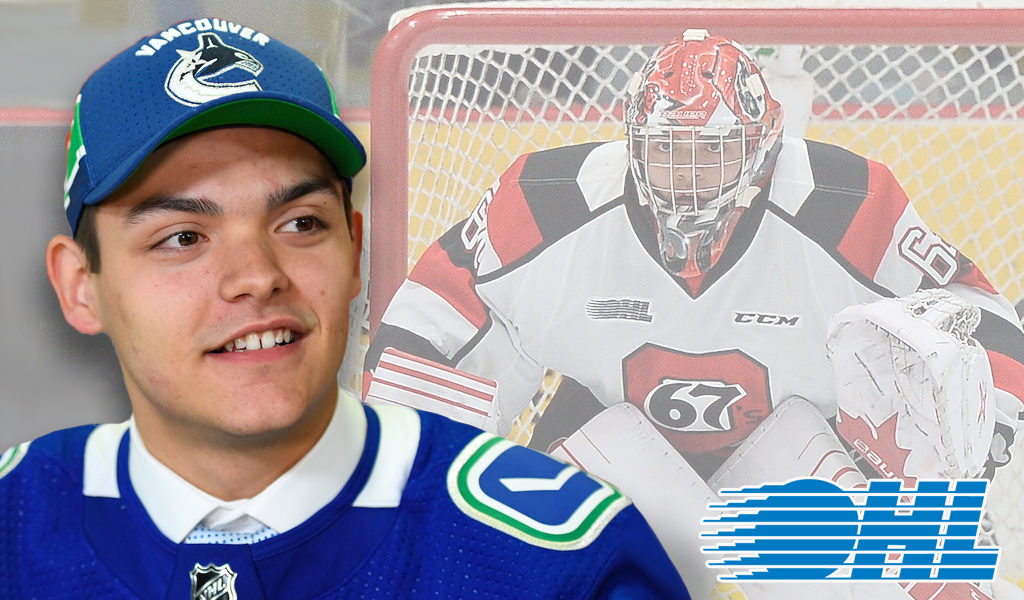 It wasn’t the result he came for, but Michael DiPietro added another big accomplishment to his hockey resume on Monday, making his NHL debut with the Vancouver Canucks.

The 19-year-old was thrust into action after scheduled starter Jacob Markstrom was held back for precautionary reasons due to a lower body injury. DiPietro’s first test came against the Pacific Division leading San Jose Sharks who proceeded to make quick work of the Canucks in a 7-2 outcome.

Though DiPietro surrendered seven goals on 24 shots, he came away speaking positively of the experience. He became the first OHL goaltender in over 20 years to make his NHL debut mid-season and the CHL’s first since Jonathan Bernier (Lewiston MAINEiacs) in 2007-08.

Welcome to the NHL. 👋 pic.twitter.com/KcKixL8Nq8

“You never want to let in the first shot, but I felt better as the game went on. There are lessons I’ll take from this and work on to end this season and throughout the summer,”he said.

“It’s not easy to come from junior and play in the NHL,” he said. “We hung him out to dry on a few of those goals. It wasn’t a good enough effort from our team. We gave them too many Grade-A chances and they made us pay.”

DiPietro was called up on an emergency basis by the Canucks last week after goaltender Thatcher Demko suffered a knee injury that is estimated to sideline him for approximately 10 days. When DiPietro makes his return to Ottawa, he’ll rejoin a 67’s club that continues to thrive as the OHL’s first 40-win team.

Just the two of us…

DiPietro, who earlier this season set a new OHL record with 17 career shutouts, is 18-10-0-1-1 with a 2.46 goals-against average and .913 save percentage over 30 games. The 2018 OHL Goaltender of the Year also represented Canada at the 2019 IIHF World Junior Hockey Championship. His time in the NHL has been his second tour of duty playing alongside grown men after he was a part of Canada’s World Championship roster in Copenhagen and Herning, Denmark.

Affectionately known as “Mikey” by devoted fans in Windsor and Ottawa, DiPietro was Vancouver’s third round pick in the 2017 NHL Draft. He becomes the second-youngest goaltender in Canucks franchise history after Troy Gamble to make his NHL debut.