Draft of the Decade: OHL produced top four picks in 2008 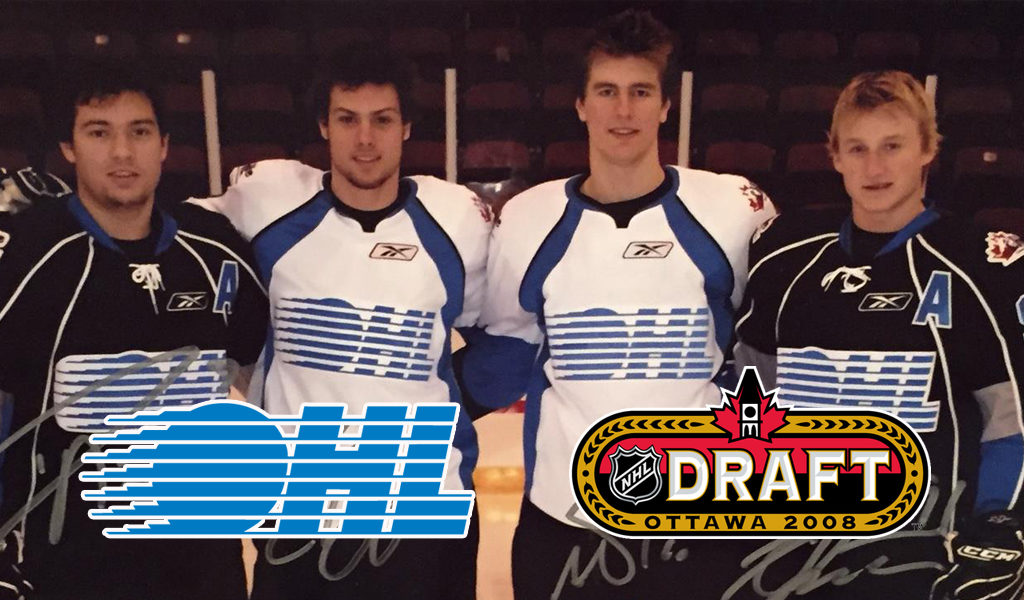 With the championships won, the awards handed out and summer celebrations in full swing, draft eligible players from across the Canadian Hockey League prepare for arguably the biggest day of their young lives as NHL clubs step to the podium and chart the course their franchise will take in the years to come.

The 2018 NHL Draft in Dallas is on the horizon, marking the 10th anniversary of one of the most memorable drafts in recent history, a year where each of the top four selections came out of the Ontario Hockey League.

Still with the Tampa Bay Lightning franchise today, Steven Stamkos of the Sarnia Sting led off the 2008 proceedings in Ottawa as then-general manager Jay Feaster made the selection to secure a player who would put up 40-or-more goals four different times and win the Maurice “Rocket” Richard Trophy in both 2010 and 2012.

“We felt that we had to find that centre iceman,” said Feaster at the time. “We still had (Vincent) Lecavalier, but we had traded (Brad) Richards (at the 2008 NHL Trade Deadline). Having a player that we thought could be a franchise player at that point and having him at that position, we were focused on that very, very early.”

While he’s had to overcome injuries along the way, Stamkos helped the Lightning capture an Eastern Conference title in 2015 and contributed in Canada’s gold medal finish at the 2017 Gold Cup in Toronto. He’s been the club’s captain for the past five seasons.

An NHL First Team All-Star this past season, Guelph Storm rearguard Drew Doughty followed at second overall. The London, Ont. native had been the OHL’s Defenceman of the Year in 2008 and, like Stamkos, was chosen by a team that he remains with to this day.

Los Angeles wasn’t firm on the selection of Doughty in the months leading up to the draft as it was fairly well-known that the blueliner needed to work on his fitness. In a story re-told by NHL.com’s Adam Kimelman, Kings GM Dean Lombardi and amateur scouting directors Mark Yannetti and Michael Futa challenged Doughty to put in the work to improve on his conditioning.

“I think it was [Futa] who had said Tampa Bay should be in here talking about you at No. 1 and the only reason they’re not is because of the fitness,” Yannetti said of a conversation that took place at Doughty’s home in London. “I don’t think it’s a secret. I don’t think he was No. 2 on any lists, he wasn’t a consensus. There were a lot of question marks about him.”

Doughty said the meeting with the Kings led to major lifestyle changes.

“I worked out as hard as I possibly could for two months and lost like 30 pounds,” he said. “Then I went into the combine and just tried to do my best. I still wasn’t the best, I was probably middle of the pack, but I did a lot better than I would’ve had I not focused on it for those two months.”

That show of commitment and dedication was enough to convince Los Angeles, who, as the past 10 years would attest, made the right decision selecting Doughty at second overall.

Doughty logged big minutes and played an instrumental role in leading the Los Angeles Kings to Stanley Cup titles in 2012 and 2014. He won the Norris Trophy as NHL Defenceman of the Year in 2016 and has excelled on the world stage, winning a pair of Olympic gold medals with Canada in 2010 and 2014 while also claiming World Cup gold in 2017.

The Atlanta Thrashers held the third overall pick and opted to select big Peterborough Petes blueliner Zach Bogosian who put up 61 points (11-50–61) in 60 games and was an OHL First Team All-Star in 2007-08.

Bogosian has been a steady stay-at-home presence over his 10 years in the NHL, being limited to just 18 games with the Buffalo Sabres in 2017-18 before undergoing season-ending hip surgery.

“Skating was becoming one of the prime assets you were looking for and Zach was a really strong skater and Zach was a really good athlete, really good size and strength,”reflected Director of NHL Central Scouting Dan Marr, who was Atlanta’s Director of Player Development at the time. “So we felt that category of skating put him a little bit ahead of some of the other guys.”

Fourth off the board to St. Louis was Niagara IceDogs defenceman Alex Pietrangelo, another franchise cornerstone who has served as captain of the Blues for the past two seasons.

“With Bogosian being so high on everyone’s list and Drew Doughty there and Stamkos, we thought we’d get Alex at four for sure,” said Jarmo Kekalainen, then the Blues assistant GM and currently the Columbus Blue Jackets GM. “We had a backup plan, we had a next player in line that we liked a lot, but we were very, very confident we’d get Alex at four.”

Pietrangelo had put up back-to-back 50-plus point seasons in his first two OHL campaigns and at 6-foot-3 with a good stride, was looking as though he’d be ready for the next level in short order. The Blues contemplated bringing the 18-year-old into the NHL the next season, giving him a pair of eight and nine-game auditions in 2008-09 and 2009-10 before he permanently made the jump to the NHL in 2010-11. Pietrangelo has been a Second Team NHL All-Star twice and won gold with Canada at the 2014 Olympics and the 2017 World Cup.

The OHL enters this weekend’s event in Dallas with 11 players ranked inside the top-31 on NHL Central Scouting’s Final North American Draft List. Be sure to visit ontariohockeyleague.com throughout the weekend for news and updates on what’s happening in Dallas.

10 YEARS OF THE OHL AT THE NHL DRAFT:

A total of 426 OHL players have been selected in the past 10 years of the NHL Draft representing over 20% of all selections including 88 first round picks which represents over 30% of the Top-30 choices annually.