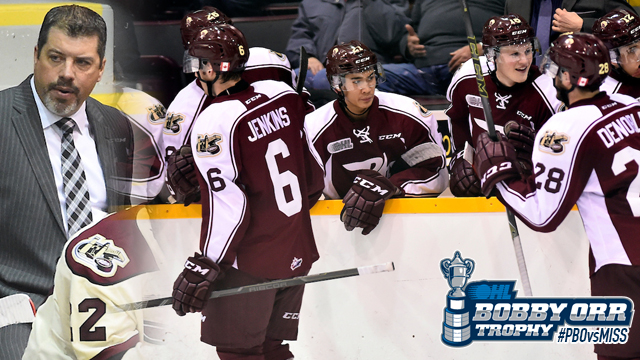 The Peterborough Petes are back in the Eastern Conference Final for the first time in 11 years, powering past the Niagara IceDogs and Kingston Frontenacs with eight straight playoff wins to reach the final four.

The playoff drive comes on the heels of the franchise’s 11th Leyden Trophy, placing first in the East Division with a record of 42-21-2-3 for 89 points.

Now in its 61st season of operation, the Petes organization boasts a rich history that includes the most Mastercard Memorial Cup tournament appearances of any CHL team in the event’s modern era (since 1972) as well as a long list of alumni that have gone on to very successful NHL careers including names such as Pronger, Yzerman, Gainey and Staal just to name a few.

Though they won just one playoff round in the 11 years since their last championship in 2006 and missed the playoffs four times in that span, the Petes are pushing ahead with their sights set on the future.

Head Coach Jody Hull (1985-88) and assistant coaches Andrew Verner (1989-92) and Kurtis Foster (1997-2002) all played on successful Petes teams once upon a time and along with former Belleville Bulls 100-point man Jake Grimes (1989-92) running the club’s defence, have worked hard to reinstate a winning culture at the corner of Lock and Landsdowne.

“As a former player, the standard here was very high all the time,” said Verner, who was a goaltender with the organization at the tail end of a run of six consecutive appearances in the Conference Finals (1985-90) under head coach Dick Todd. “It’s certainly what we’ve been working toward and we kind of feel like we’re setting a new standard going forward because a lot of our guys are coming back.”

With that winning feel returning to Peterborough, Verner and his staff have felt the excitement extend beyond the walls of the Memorial Centre.

The Petes have been the talk of the town.

“I do a lot of work in the minor hockey circles, so I’m out in the rinks a lot. I can feel a tangible difference in the interest level and the excitement from the kids and the parents out there,” he said. “People are certainly into it this year. I’ve been here five years and the kind of community enthusiasm we’ve had has really added an element of excitement for everyone involved.”

Verner, who went on to backstop the Cape Breton Oilers to a Calder Cup title in 1993 before a 15-year pro career in Europe, says the Petes are a well-known organization across the hockey world.

“We stand on the shoulders of a lot of great players and people,” he said. “Everywhere you go, people know who the Peterborough Petes are because of that history and tradition that has been built over the years.

“We do make a real effort to honour our past,” he continued, “but we can’t lose sight of the here and now.

“We’ve written some new history this year by reaching the Conference Final and we want to keep things going here in this series.”

The Petes face an uphill climb headed into Mississauga for Game 3 tonight trailing 2-o in the series.

Despite the adversity, Petes captain Brandon Prophet looks at the situation like any good leader would – as an opportunity.

“I think it’s a big opportunity to show our character as a team,” he said following Saturday’s 3-0 loss in Game 2.  “It’s never the plan to go down 2-0 but the character that we have in the room, the leadership, we know what we have to do as a team and we’re going to have to come out hard on Monday.”