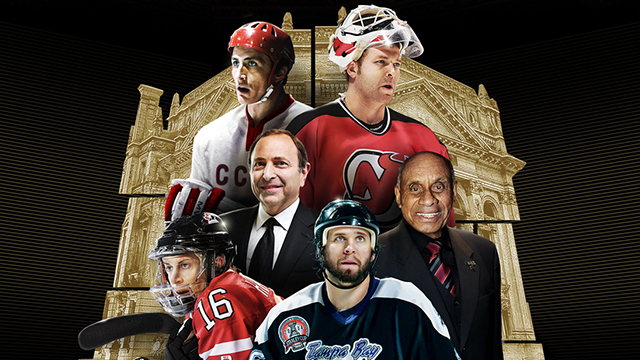 Hockey Hall of Fame Induction Weekend is a November tradition unlike any other.

Festivities will run from November 9 – 12 honouring the Class of 2018 – Martin Brodeur, Jayna Hefford, Martin St. Louis and Alexander Yakushev who will enter the Hall in the Player Category and Gary Bettman and Willie O’Ree in the Builder Category.

Goaltending legend Martin Brodeur backstopped the New Jersey Devils to three Stanley Cup titles and helped Canada to Olympic gold on two occasions. He was awarded the Vezina Trophy as the NHL’s best netminder four times and retired as the all-time leader in wins and shutouts.

A mainstay on the Canadian national team for close to two decades, Jayna Hefford is a four-time Olympic gold medalist and the second most prolific scoring Canadian in Women’s World Championships and Olympic history. A seven-time World Champion, Hefford was the recipient of the tournament Directorate Award as Top Forward in 2004 and 2005.

Though undrafted by an NHL club, Martin St. Louis would go on to be one of the most dominating point-producers of his era. Twice he won the Art Ross Trophy as the league’s leading scorer and in 2004 he was awarded the Hart Memorial Trophy and Lester B. Pearson Award as NHL MVP. St. Louis was a member of the Tampa Bay Lightning’s Stanley Cup championship team in 2004 and helped Canada to gold at the World Cup of Hockey and Olympic Games.

Widely considered one of the top players outside of the NHL, Alexander Yakushev was a part of three Soviet league titles with HC Spartak Moscow. On the international stage he was a member of seven World Championship-winning teams and was a two-time Olympic gold medalist with the Soviet Union.

During Gary Bettman’s time as Commissioner, the NHL has grown from 24 to 31 franchise and has seen annual revenue increase from $400 million to almost $5 billion. Bettman facilitated the evolution of the NHL game to include video review, hybrid icing, shootouts, outdoor games and regular season games played outside of North America.

Willie O’Ree spent over 20 years championing the NHL’s “Hockey Is For Everyone” initiatives through clinics and lectures around the world. Since 1998 he served as Director of Youth Development for the NHL/USA Hockey Diversity Task Force, a non-profit program for minority youth that encourages and facilitates hockey participation and learning.

Highlighting the Sunday afternoon schedule is the Haggar Hockey Hall of Fame Legends Classic. The game will take place at Scotiabank Arena (formerly Air Canada Centre) on November 11 with Honoured Members Ed Belfour and Grant Fuhr trading in their goalie pads to captain two star-laden teams, and feature the return to the net of 2018 Inductee Martin Brodeur.