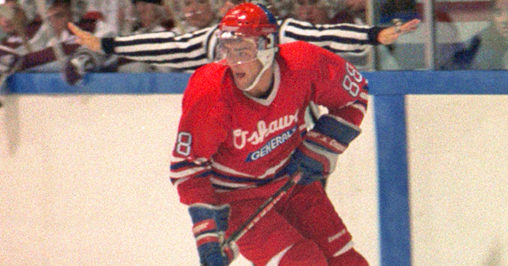 Oshawa Generals graduate and NHL great Eric Lindros entered the prestigious Hockey Hall of Fame on Monday night in Toronto, celebrating a decorated career that included dominance at multiple levels of the sport.

The 43-year-old spoke with gratitude on the emotional night, being inducted into the Hall alongside Sergei Makarov and Rogie Vachon in the Player Category as well as Pat Quinn in the Builder Category.

He credited his wife, Kina Lamarche for her continual support and cited his three children Carl Pierre, Sophie Rose and Ryan as – “the most important people in the world to me.”

Now on his way to the Hall of Fame, Eric Lindros was the most important player in CHL history. @John_Grigg https://t.co/QGr38FPi7X pic.twitter.com/ajxoVCfS51

From his early years in the OHL when he led the Oshawa Generals to a Mastercard Memorial Cup title in 1990, Lindros was in control of the game whenever he set foot on the ice.

He currently holds the OHL single-season record for most game winning goals in a season with 16 of his 71 goals during the 1990-91 season of the game deciding variety.

A decorated 760-game NHL career from 1992-2007 featured a Hart Trophy and Ted Lindsay Award with the Philadelphia Flyers in 1995, leading the NHL Playoffs in scoring in 1997 and on the international front, a 2002 Olympic Gold medal with Canada in Salt Lake City.

Amazing weekend. I enjoyed every minute of it. From @NHLFlyers wearing 88 for warm up to seeing my plaque in the @HockeyHallFame. Thankful. pic.twitter.com/Cpb6gxmSFn

Lindros amassed 865 career regular season points (372-493–865) over 760 games between Philadelphia, the New York Rangers, Toronto and Dallas before announcing his retirement following the 2006-07 season. He is the fifth-fastest player in NHL history to reach 500 points in a career.

He had his number 88 retired by the Oshawa Generals in March 2008 and was recently honoured by the club prior to puck drop on November 6th.

Lindros was dominant at all levels of the game and remains one of the greatest competitors to ever play the sport.