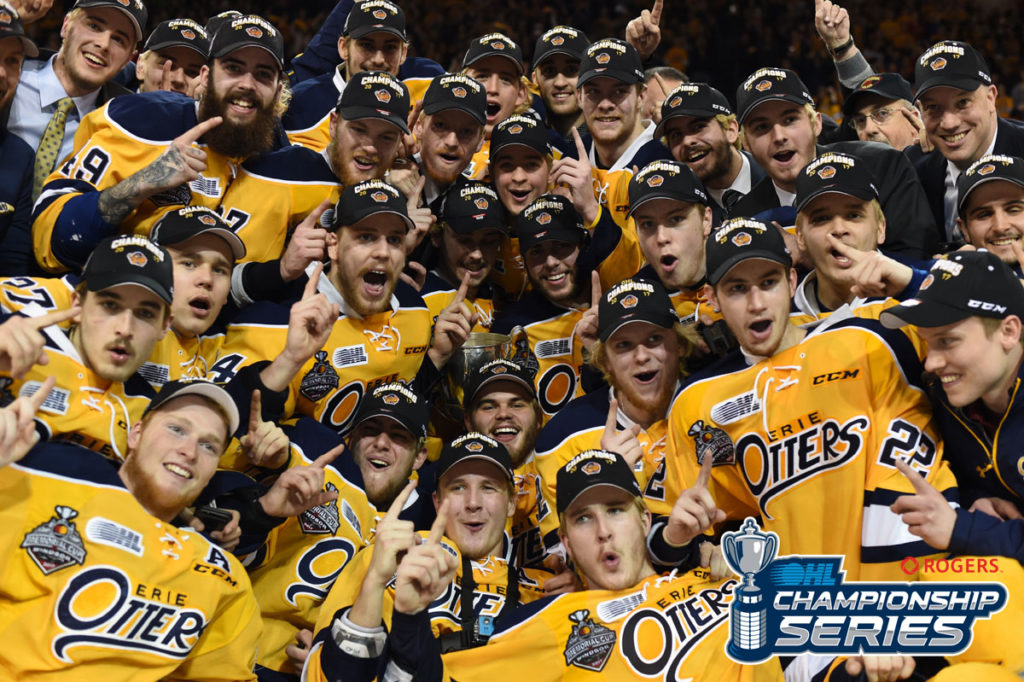 ERIE, PA – Anthony Cirelli has developed a reputation for scoring big goals over the course of his OHL career.

The Tampa Bay Lightning prospect delivered when it mattered most once again on Friday, scoring 2:41 into overtime to crown the Erie Otters OHL Champions for the second time in franchise history.

Down 3-2 inside the final two minutes of the third period fellow Lightning draft selection Taylor Raddysh scored with 1:15 remaining, completing a hat-trick to send the game to overtime.

Cirelli took a Dylan Strome pass early in the extra frame to lift the Otters to a 4-3 win over the Mississauga Steelheads in Game 5 of the Rogers OHL Championship Series.

“It was all Stromer,” said Cirelli of the winner, “He got the puck low and fed it in front there and I banged it in.”

Acquired by the Otters midway through the season, Cirelli’s impact was immediate as the 19-year-old who is also remembered for being the hero of the 2015 Mastercard Memorial Cup with the Oshawa Generals came through in the clutch once again.

“I don’t know,” he reflected. “I just come to work every day and I just want to help the team to win. Everyone has been great to me here in Erie and I’m playing with unbelievable players. It makes my job easy.”

“I’m beyond words,” said head coach Kris Knoblauch. “It’s been a long time and I’m just kind of relieved that it’s come to this. I’m so proud of my guys.

“You look at what happened throughout these playoffs. Coming from behind in Game 7 against London and tonight being down two goals a couple times and then pulling it off in overtime, it’s pretty dramatic.”

Carolina Hurricanes prospect Warren Foegele had an assist in the win and received the Wayne Gretzky ’99’ Award as OHL Playoff MVP. Foegele finished the postseason with 13 goals, 13 assists and 26 points in 22 games including eight points in the Rogers OHL Championship Series. The Markham, Ont. native scored a number of big goals throughout Erie’s playoff run including a second round Game 7 overtime winner against the London Knights.

While Foegele was named OHL Playoff MVP, Otters forward Alex DeBrincat led the OHL Playoffs in scoring, finishing with 38 points including 13 goals and 25 assists in 22 games.

The Otters overcame a pair of two goal deficits in the championship-clinching win and trailed 3-2 for much of the third before Raddysh completed his hat-trick, blowing the lid off Erie Insurance Arena with just 1:15 to go on assists from Strome and Warren Foegele.

Strome set up Cirelli for the overtime winner on the power play as the capacity crowd of 6,781 at Erie Insurance Arena erupted in celebration.

The Otters outshot the Steelheads 43-26 as Mississauga netminder Matthew Mancina made 39 saves.

Spencer Watson (15) and Michael McLeod (11) powered the Steelheads to a 2-0 lead in the first period before 2017 NHL Draft prospect Owen Tippett (10) scored to reinstate a two-goal cushion with 5:51 remaining in the second frame.

Raddysh’s hat-trick is the Otters’ fifth of the 2017 OHL Playoffs as he led the Otters comeback on an unforgettable night in the Flagship City.

Erie’s title marks the fourth time an American team has won an OHL Championship as the 2017 Otters join the 1995 Detroit Jr. Red Wings, 2002 Erie Otters and 2007 Plymouth Whalers in hoisting the Robertson Cup.

They finish the 2017 OHL Playoffs with an overall record of 16-6-0, outscoring opponents 95-59. After sweeping the Sarnia Sting in the first round, the Otters proceeded to eliminate the defending Mastercard Memorial Cup Champion London Knights in seven games and defeat the Owen Sound Attack in six games be crowned Western Conference Champions. Cirelli’s overtime winner caps a 4-1 series victory for the Otters over the Mississauga Steelheads.

The Otters join the QMJHL’s Saint John Sea Dogs as the second champion from across the Canadian Hockey League to advance to the 2017 Mastercard Memorial Cup in Windsor. They open their schedule on Saturday May 20th against the champions from the Western Hockey League.