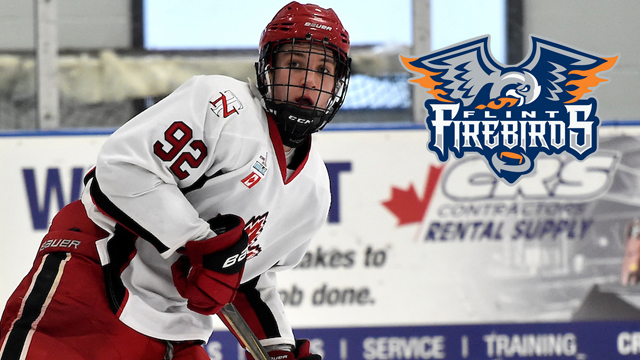 Flint, Mich. – The Flint Firebirds announced today that forward Ethan Keppen, the 10th overall pick in the 2017 OHL Priority Selection, has committed to an Ontario Hockey League standard player agreement with the club.

“We’re extremely happy that Ethan has committed to our program,” said Flint Firebirds General Manager Barclay Branch. “He is a tremendous hockey player and an outstanding person that will be a big part of our nucleus moving forward. On the ice, he fits the power-forward type mold. He possesses good size, is a strong skater and can make good things happen both with the puck in a skill sense and without the puck in a physical sense.”

Keppen, a native of Whitby, Ont., earned 35 points (14G, 21A) in 33 games played last season with the Toronto Nationals Minor Midget AAA Hockey Club. The 6-foot-1, 197-pound left-winger also tallied more than a point-per-game in the 2017 OHL Cup in March, scoring three goals and adding eight assists for 11 points, including a plus-seven rating in eight games played. Keppen’s performance came prior to being one of only six players named to the 2017 Gatorade OHL Cup All-Star Team (one for each position).

“It’s exciting to officially welcome Ethan and his family to the Flint Firebirds,” said Head Coach Ryan Oulahen. “In having the chance to get to know him over the last couple of months, you really can match up the style of play that he has with his personality and traits. Ethan is a real sincere, down-to-earth person. He’s a fearless competitor with a tremendous work ethic.”

What OHL Central Scouting says: “Ethan is a prototypical power forward. He has very good size with a powerful stride that allows him to reach top speed quickly. He goes up and down his wing crashing and banging into everything. Ethan creates room for his linemates and goes to the net hard for rebounds and loose pucks. He is a complete player that takes care of his own end and is relied on in all key situations. There isn’t a hit that he turns away from. He competes hard for loose pucks and forechecks effectively.

“It’s an honor to sign with the Firebirds’ organization,” said Keppen. “It’s been a dream of mine to play in the OHL since I was younger and I am excited to have this opportunity. I’ve already seen such great things about the fans and facilities in Flint. I know we have a great group of guys here and I am looking forward to playing with them. It’s going to be a great ride in Flint and I cannot wait until August.”