Familiarity to go a long way for Rangers’ Andrew LeBlanc 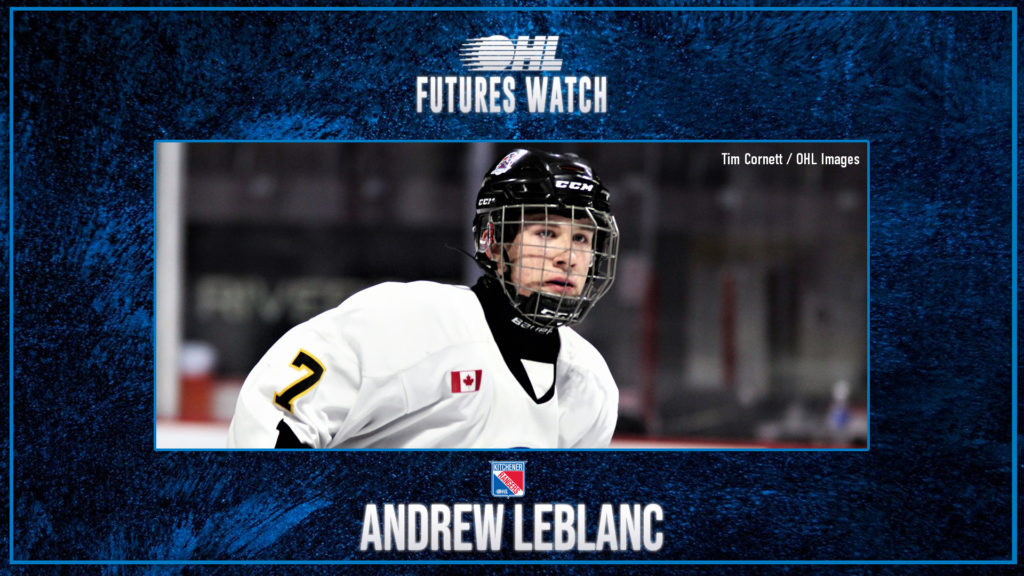 Heading into the 2020 OHL Priority Selection, Andrew LeBlanc had his sights set on becoming a Kitchener Ranger.

“I did hope to go to Kitchener. It’s the best team in the CHL so who wouldn’t want to go?” said the 16-year-old Rangers prospect from his home in Port Colborne, Ont. “They have pretty young coaches. They know how we think, they’re very offensive and let us have creativity and I just think it’s the perfect spot for me to be able to play.”

The offensive specialist had his sights set on something else, too – being drafted to the same team as his twin brother, Jacob.

In both cases, he got what he wanted.

“Going into the draft, we talked to our agents and we hoped that we’d get to the same team and go as a package deal but nothing’s for sure. We didn’t really know if someone else would take him or if someone would take me before, or how it would play out,” he continued. “When we ended up going to the same team, we were ecstatic. That was the goal since day one and it happened.”

Andrew, a left-shot centreman, and Jacob, a right-handed defenceman, boast an unmatched chemistry they’re eager to bring to the Rangers lineup for the 2021-22 season.

“It’s just kind of a twin thing. We just have that twin connection, we know where each other is all the time,” said Andrew. “Because we grew up together we’re so close, and I don’t know, we just have that connection.”

Up-and-coming prospect Andrew LeBlanc (@AndrewLeBlanc04) can’t wait to live in Kitchener and has some really fond memories growing up in @OHLIceDogs territory. The first round @OHLRangers #OHLDraft pick discusses all that and more with @sarahjeanmaher 🎥 pic.twitter.com/0JH4j0Yft4

Rangers GM and head coach Mike McKenzie had his eyes on the two of them for awhile.

“I guess Mom and Dad or Grandma and Grandpa or whoever got them skating might have planned that one pretty well. With one being a forward and a left shot and one of them being a defenceman and a right shot, they don’t have to compete with each other for ice time,” said McKenzie. “If you get both of them on your team you have a pretty good base up front and a pretty good base on the backend as well.”

Following an outstanding season with the Southern Tier Admirals over which he posted 68 points in 31 games, Andrew was chosen 17th overall by the Rangers last April.

“Obviously we really like the way [Andrew] plays the game. His skill and his hockey sense are things that stand out. We obviously haven’t been able to see that firsthand in the last year but going back to his draft year, there’s his grit and tenaciousness, and he’s a guy that plays hard,” McKenzie went on. “Even though he’s a skilled and smart player, he has a bit of grit and a bit of jam to his game.”

Jacob, the eldest of the twin brothers, led the Admirals in points (27) and assists (22) by a defenceman. The blueliner was the Rangers’ second pick in the 2020 OHL Priority Selection, chosen 42nd overall in the third round.

“I think [Andrew] and his brother have a real passion for the game of hockey and they’re just guys who really want to get better and are excited about getting better,” added McKenzie. “There’s a quiet confidence to them but they also know there’s a lot of work to be done and I don’t think they’ll shy away from doing that work.”

Gearing up for next season, the two have been working out in their home gym and spending time with their trainer regularly. Hoping to make an immediate impact, Andrew’s gained a bit of weight, upped his strength and overall, improved his skillset.

“I’m a real offensive player, I like to play a fun style, I like scoring goals, I like making plays, I’m always being creative, making nice moves, but I also get to the dirty areas, most people may not notice that, but I like to get under the other team’s skin, mix it up a little bit and just have fun,” he said of his talents.

GM Mike McKenzie looks to maintain the @OHLRangers‘ dynamic pace as he weighs in on the Leblanc twins, Swick, Parsons, Gauthier and Fegaras 🎥 pic.twitter.com/9scN2UgF7A

Shortly after hearing his name called by Kitchener, Andrew made note of wanting to boost his confidence ahead of his OHL debut. Though, according to him, the feeling of cracking the Rangers admittedly won’t feel real until his first game, he knows being able to integrate with the team alongside Jacob will do wonders for his ability to make the jump to junior.

And joining the two of them in Kitchener will be another familiar face in 6-foot-4 winger and fellow Admirals graduate Trent Swick, who served as Andrew’s linemate. So while the past year has come with its bout of uncertainties, his excitement hasn’t wavered knowing he’ll get showcase his skills two hours away from home with two of the people closest to him.

“All together last year, we had amazing chemistry. I didn’t really expect we’d be on the same team. When we heard his name called with ours, we were surprised but it worked out perfect because he’s a really good friend of ours,” said Andrew of his former linemate. “I think it’s easier going in with my brother and one of my really close friends. It just makes everything easier. I can’t wait to get started.”