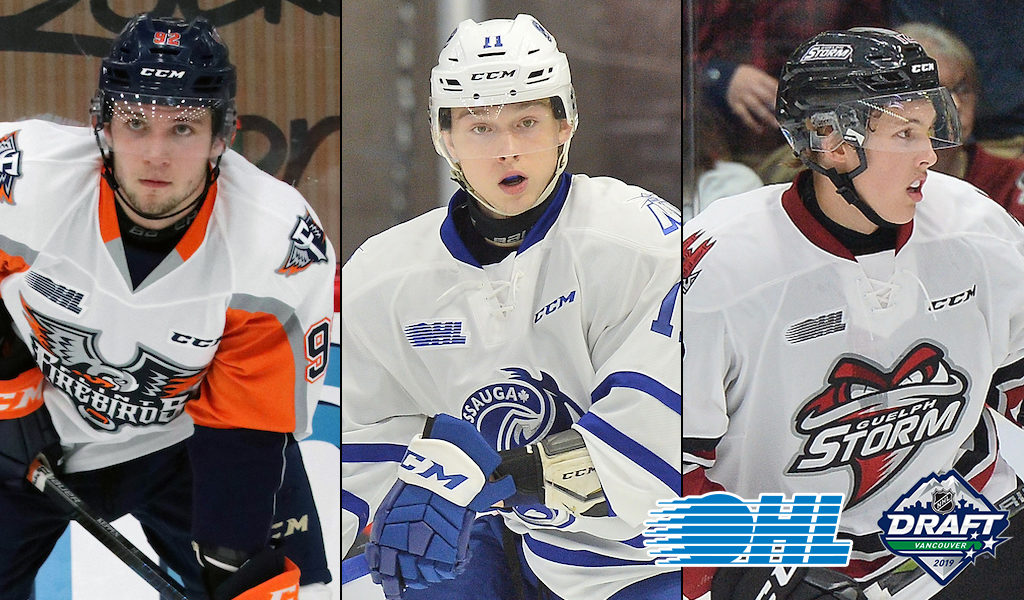 While the upper echelons of Draft eligible OHL talent have been well-established for some time and are covered extensively in ontariohockeyleague.com’s #NHLDraft Profiles, the League features some intriguing mid-round options ahead of the 2019 NHL Draft slated for this coming weekend in Vancouver, BC.

Whether they’re players still working to round out their overall game, a sneaky undersized point producer or a player that has demonstrated excellence in one or two particular areas, NHL clubs will be looking to fill holes and are eyeing long-term projection once they get beyond the early proceedings of this weekend’s Draft.

Ending on a high note at home 🔥

Captain @tydellandrea sets up sophomore @EthanKeppen92 for his 3️⃣0️⃣🚨 of the season before a sold out @FlintFirebirds crowd that saw a third straight win in town. pic.twitter.com/20Wj3rneqf

The highest ranked of the three players, Keppen finished his sophomore season with 30 goals and 59 points over 68 games. He recorded 34 of his 59 points following the turn of the new year and rose 36 spots among North American skaters, coming in at 74th overall.

“I think Ethan felt a lot more comfortable as the whole team made significant improvements in the second half,” said Firebirds head coach Eric Wellwood who took the reins of the 0-9 Firebirds on October 18th.

“He really uses his size to his advantage and he is fearless out there. He isn’t afraid to go up and down the wing and go to the hard areas to make plays.”

Originally Flint’s first round (10th overall) pick in 2017, Keppen has grown to 6-foot-2 and 212Ibs. as he played a physical power forward game while also leading the club in shots on goal with 213 this past season. He began the 2019 calendar year with points in 19 of his 21 outings.

Even when the going got tough in Flint, Keppen was continually a catalyst for the Firebirds as he helped them finish the season earning 11 of a possible 16 points down the stretch.

“It shows his character,” continued Wellwood. “He was a kid who right from the get-go, even when things were at the lowest point, he said he was all in no matter what. He’s a natural leader, he wants to have team success and he’s willing to do whatever he needs to do.”

Forward @StevensonKeegan plays a responsible game for @OHLHockey’s @Storm_City and has risen in the #NHLDraft rankings ahead of the #MemorialCup where he’s among the event’s top prospects: https://t.co/8Zs4DXxqGy#SWTPdraftpick 🎥 via @Sportsnet pic.twitter.com/k6HQEqMQ7r

A player who did see tremendous team success this past season, Stevenson helped guide the Guelph Storm to an OHL Championship, jumping 53 spots on NHL Central Scouting’s Final Rankings to 95th along the way.

A versatile winger who can play both sides, Stevenson finished the season with 19 goals, 15 assists and 34 points in 55 games before chipping in with five points over 23 playoff contests.

The late 2000-born flank is what could be considered a late bloomer. He had a chance to showcase his skills at the 2019 Memorial Cup presented by Kia in Halifax.

“Due to the number of injuries we had to deal with this season Keegan had a chance to do a lot of different things and he did them well,” noted Storm head coach George Burnett. “He played the net front on the power play, he killed penalties with a lot of success. When he missed the final 15 games of the season with an injury we really missed him. He was a big part of our team.”

The Sault Ste. Marie, Ont. native is the son of former NHL winger Jeremy Stevenson who played four OHL seasons followed by 15 in the professional ranks.

“Keegan is a hard worker; he doesn’t say a lot,” Burnett continued. “He’s a good teammate, a hard-working guy in the gym and in practice daily you never have to question his habits and it’s always fun to coach guys that can bring that kind of work, effort and attitude to the rink everyday.”

Ranked one slot below Stevenson, 6-foot-3 forward Cole Schwindt finished the season with 30 of his 49 points in the latter half. The Mississauga Steelheads sophomore can play both centre and the wing and climbed 35 spots to 96th on the Final edition.

“His gains were a result of his commitment to continued learning and development,” cited Steelheads coach James Richmond. “He really started putting more time in off the ice with video work and gym work and his confidence grew. When we moved (Ryan) McLeod and (Owen) Tippett in January he really took on more responsibility and came through in a big way for us.”

A former fourth round pick by the Trout in 2017, Schwindt scored 19 goals and added 30 assists for 49 points as a 17-year-old. Regardless of what happens this weekend, he looks to be a big part of things for the Steelheads moving forward.

“He’s worked on his skating non-stop,” Richmond added. “I’d say he’s a strong skater, he’s strong on his feet, has good speed and his puck protection skills are off the charts. He’s 6-foot-3, still filling out and I think he’s going to be a solid pro.”

Keppen, Stevenson and Schwindt are just a few of the intriguing OHL storylines headed into the 2019 NHL Draft. Stay tuned to ontariohockeyleague.com for continued coverage leading into and throughout the weekend.