Fast Track: Tkachuk and Chychrun made the jump 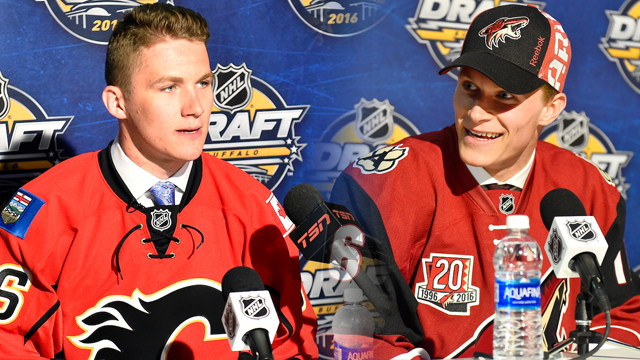 While it’s one thing to turn pro as a teenager, it’s quite another to leave the impression that 2016 first round NHL Draft selections Matthew Tkachuk and Jakob Chychrun did in their first trip around the National Hockey League circuit.

After lifting the London Knights to CHL supremacy with a Mastercard Memorial Cup Final overtime winner against the Rouyn-Noranda Huskies in Red Deer, Tkachuk was ready for prime time. The St. Louis native saddled up with the Calgary Flames and mirrored the gritty, in-your-face approach of his father Keith, a retired NHL power forward of 18 seasons (1991-2010).

After being held pointless in his first three games, Tkachuk’s first NHL goal on October 18th against Buffalo seemed to spark some production as he’d proceed to record a point in four of his next six outings.

“This is a guy who has had success everywhere he’s been, including the Memorial Cup last year, and he just seems like he rises,” Flames assistant general manager Craig Conroy told Wes Gilbertson of the Calgary Herald. “You know, every time the stage gets a little bit bigger, it seems like Matthew is able to rise with that. And that’s what is exciting for us.”

The Flames bowed out of the NHL Playoffs in four games against the Anaheim Ducks, leaving Tkachuk feeling somewhat empty after an otherwise impactful season.

“It’s obviously frustrating the way the season ended,” he told the Calgary Sun’s Kristen Odland. “This whole year, I’ve never prided myself on production, points or goals or anything like that. It was just the way I wanted to play … I think I grew in every asset possible. With Backs (Backlund) and Fro (Frolik), we were put up against other teams’ top lines every single night.”

Matthew Tkachuk is part of a lengthy list of #Flames rookies who’ve made an immediate, often indelible, impact. https://t.co/RxpXTKMb56

Just over three months younger than Tkachuk, defenceman Jakob Chychrun became the latest Sarnia Sting graduate to make an early leap to the NHL, doing so at just 18 years of age.

Following in the footsteps of Steven Stamkos, Nail Yakupov and Alex Galchenyuk before him, Chychrun stuck in the NHL with the Arizona Coyotes and put up 20 points (7-13–20) over 68 contests, earning the praise of former head coach Dave Tippett in the process.

“His game, from where he started to where he is now, is trending very nicely,” Tippett told Arizona Central’s Sarah McLellan late in the regular season.

The former first overall pick of the 2014 OHL Priority Selection, Chychrun burst out of the gate as the NHL’s youngest defenceman, recording points in each of his first three contests. His first NHL goal on October 20th in Montreal made him the youngest goal-scorer in Coyotes history.

While he went through the learning process of any 18-year-old defenceman in the NHL, he did play over 20 minutes eight different times throughout the season, often playing alongside 27-year-old veteran Luke Schenn (Kelowna Rockets) as well as a recently traded fellow Sting graduate in 24-year-old Connor Murphy.

In his rookie season, 18-year-old defenseman @j_chychrun7 proved he belonged in the @NHL.https://t.co/cW11nGmyqK

While Tkachuk’s Flames met their demise in the first round, Chychrun’s Coyotes finished outside of the playoff picture with a 30-42-10 record, meaning both young stars are undoubtedly eager to get back to work in preparation for a new season in the fall.

After hearing their names called and walking up to the stage in Buffalo just one year ago, Tkachuk and Chychrun both made the transition to life in the NHL in the months that followed.

The next crop of Ontario Hockey League talent is ready to try and do the same with the first step fast approaching this weekend as the 2017 NHL Draft takes place in Chicago on Friday and Saturday.