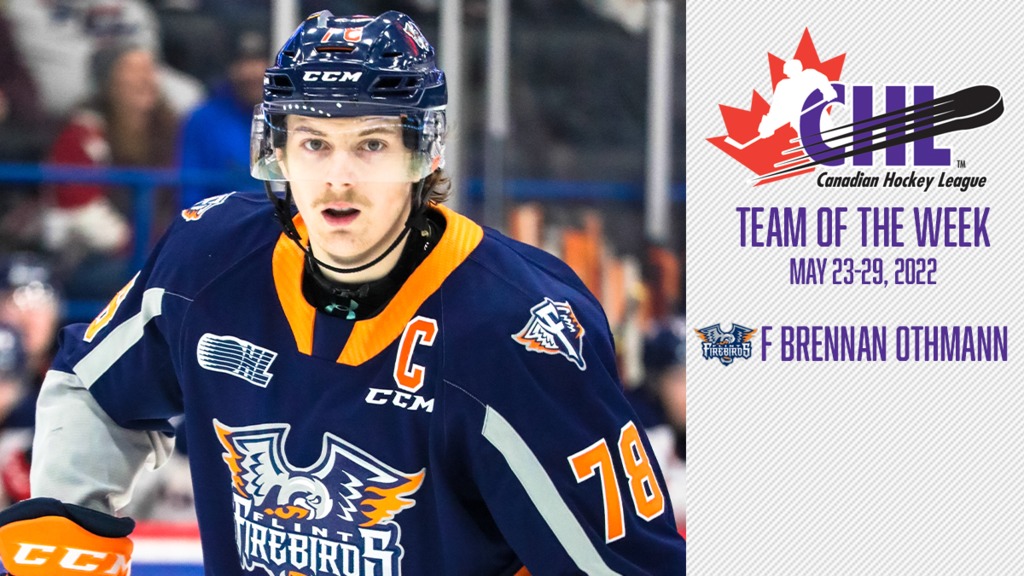 The Canadian Hockey League announced today the 27th edition of the CHL Team of the Week for 2021-22 based on individual performances from May 23-29.

Leading the forward ranks is Edmonton Oil Kings overage left-wing Carter Souch who collected seven points counting four goals and three assists through a trio of appearances. Among the highlights was Friday’s 7-1 series-clinching win over Winnipeg in which Souch put up a four-point performance and was later recognized as the game’s first star. Through 13 postseason outings, the Edmonton native sits second in Oil Kings scoring with 17 points.

Also up front is Montreal Canadiens prospect Xavier Simoneau of the Charlottetown Islanders who recorded three goals and four assists for seven points in three games including Wednesday’s Game 1 win over Sherbrooke that saw the overage centre notch two goals and two assists before later being named the first star of the game. A native of Saint-Andre-Avellin, Que., Simoneau sits tied for second in Islanders’ playoff scoring with 14 points in 10 contests.

Rounding out the forward ranks is New York Rangers 2021 first-round selection Brennan Othmann of the Flint Firebirds who registered one goal and five assists for six points through four outings underscored by a three-point performance coming in Sunday’s Game 5 road win in Windsor. For his efforts, Othmann was later recognized as the OHL Player of the Week. A 19-year-old native of Pickering, Ont., the talented left-wing leads the Firebirds in playoff scoring with 23 points through 17 games.

On the blue line, Vegas Golden Knights draftee Lukas Cormier of the Charlottetown Islanders impressed with two goals and four assists for six points across three appearances including a three-point effort coming in Thursday’s 4-3 overtime final versus Sherbrooke. A 20-year-old native of Sainte-Marie-de-Kent, N.B., Cormier was recently named the QMJHL Defenceman of the Year after posting 81 points in 62 regular season games. Through 10 playoff appearances, Cormier leads all Islanders rearguards with 13 points.

Also on the back end is Montreal Canadiens 2020 first-round selection Kaiden Guhle of the Edmonton Oil Kings who collected three goals and two assists for five points in three games underscored by two goals and an assist coming in Friday’s Game 5 win versus Winnipeg. Guhle was later named the WHL Player of the Week for his efforts. A 20-year-old native of Sherwood Park, Alta., Guhle leads all Oil Kings defencemen in playoff scoring with 14 points through 13 games.

Between the pipes, Quebec Remparts netminder William Rousseau won two of three appearances in which he combined for a .940 save percentage and 1.63 goals-against average including a 27-save showing coming in Sunday’s 3-2 win in Shawinigan. A 19-year-old native of Trois-Rivieres, Que., Rousseau has found the win column in five of seven playoff appearances while ranking amongst the league leaders with a .929 save percentage and 1.91 goals-against average.