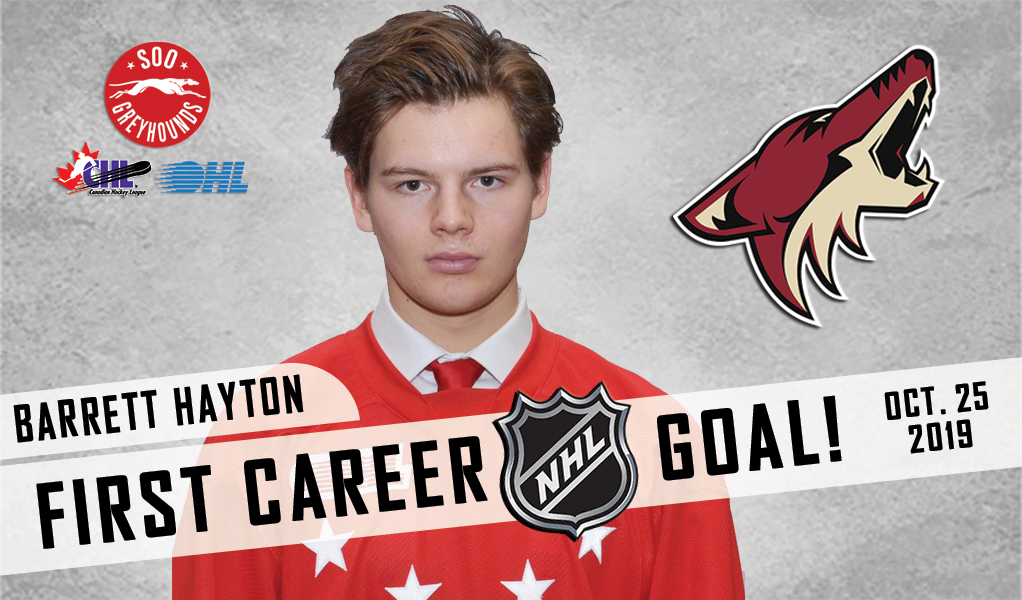 Barrett Hayton’s first NHL goal was extra special for more than one reason.

Facing New Jersey on Friday, the Arizona Coyotes first-year forward cashed in after linemate Nick Schmaltz drove to the net and put the puck on a platter in front of Devils netminder Mackenzie Blackwood before Hayton tucked home the eventual game winner.

Friday marked Hayton’s third appearance this season and second-ever point after he recorded an assist versus the Vegas Golden Knights earlier this month. Notably, lighting the lamp was even more meaningful to the Soo Greyhounds graduate.

“It’s definitely a pretty cool experience. It’s something you dream of for the longest time,” Hayton told reporters in recollection of his goal. “I was going to the net, (Schmaltz) made a great feed, and I was able to finish it off.

“I think I am learning a ton every day. Obviously these guys are so successful for a reason, so I just show up and be a sponge … Watching games, talking with them, I’m developing a ton and learning from them.”

Hayton, 19, made the Coyotes’ opening day lineup for the second time this fall after doing so a year ago, an opportunity that was ultimately cut short by an injury before he returned to captain the Greyhounds in a season in which he tallied 66 points counting 26 goals and 40 assists in 39 appearances to finish third in the Ontario Hockey League with 1.69 points per game.

“That was a good line. That was our best line. ‘Hayts’ was good,” fellow Greyhounds graduate and Coyotes head coach Rick Tocchet said following Friday’s game. “He hadn’t played in a week or so and he gets his first goal. He did a good job for us.”

A product of Peterborough, Ont., Hayton appeared in three seasons with the Greyhounds, collecting 56 goals and 97 assists for 153 points in 165 career contests. Selected fifth overall by Arizona in the 2018 NHL Draft, Hayton was also one of 339 CHL alumni named to opening night rosters across the NHL but just one of five players who competed in the league in 2018-19.