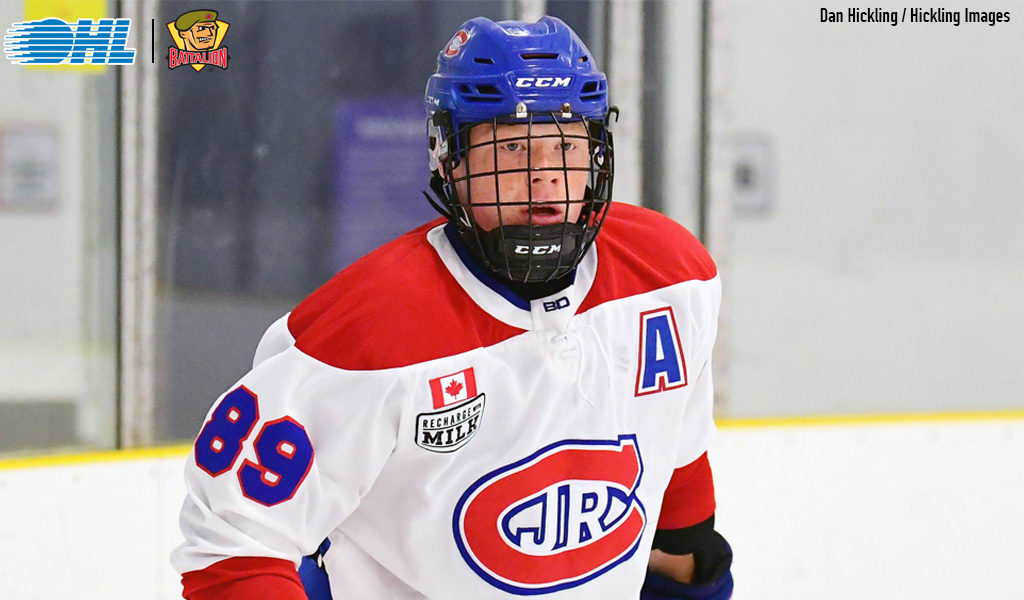 “I’m super proud and honoured to be wearing that Battalion jersey next season! The work has already begun, and I cannot wait for camp. Let’s go!”

First overall pick @KidNelly89 is soaking up the excitement and expresses his eagerness to get into the @OHLBattalion lineup to fulfill a lifelong goal of playing in the #OHL 🎥 pic.twitter.com/3AUxSRsPpB

Nelson, the first overall pick in the OHL Priority Selection on April 4, played last season with the Toronto Jr. Canadiens, scoring 18 goals and earning 47 assists for 65 points in 61 games. He had 11 goals and 21 assists for 32 points in 33 league games and added one goal and 11 assists for 12 points in 11 playoff games as the team won the Greater Toronto Hockey League championship.

A right shot, the five-foot-eight, 174-pound Toronto resident, who played on Canada’s bronze medal-winning team at the Youth Olympic Winter Games in Lausanne, Switzerland, in January, turned 16 on March 30.

“He’s a modern defenceman who can affect the game at both ends of the ice. Above all else, Ty is a great person with high character and excited to wear the Battalion green.”

Nelson is the second player to be selected first overall by the Battalion, after rearguard Jay Harrison in 1998, when the Troops were about to embark on their expansion season in Brampton.

The Battalion usually holds an orientation camp for new prospects at Memorial Gardens at the end of May, but the coronavirus pandemic has put OHL activities on hold. The last two weeks of the regular season and the playoffs were cancelled, with the dates of training camps for next season unknown.