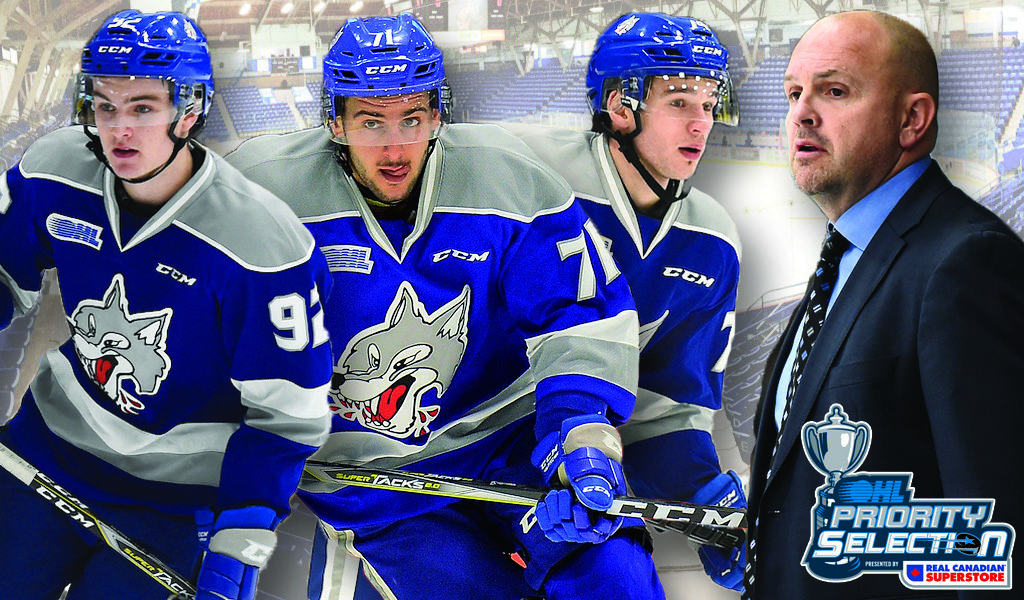 It was a year that wasn’t meant to be for the Sudbury Wolves.

A rash of early season injuries including the loss of overage forward Ryan Valentini one game into the season before third-year scorer David Levin missed the entire month of November put Sudbury behind the eight ball.  The Wolves showed glimpses of promise the rest of the way but a team with a young blue line under first-year head coach Cory Stillman finished out the campaign at 17-42-9-0,  securing the first overall pick in Saturday’s 2018 OHL Priority Selection presented by Real Canadian Superstore.

It’s a bittersweet feeling for Wolves GM Rob Papineau who joined Stillman as a newcomer to his role in Sudbury this past season.

“Any time you have the opportunity to take the first pick in the draft, especially one with as many talented kids as this year’s, it’s a privilege,” he said. “It’s obviously not a good feeling to finish things up the way we did this season, but we’ve been looking forward to this pick for a long time  and we’re going to take the player that we feel is the best available in the draft.”

Papineau and the Wolves will identify that player on Friday afternoon as they reveal who they’ll select to kickstart Saturday’s proceedings that get underway at 9:00am.

While the Wolves weren’t able to hit the 20-win plateau, they were in a lot of close games, losing 18 by one goal this past season. Promising young names in Blake Murray, Anthony Tabak and Liam Ross saw ample ice in the latter half of the season, earning increased roles alongside fan favourites Drake and Darian Pilon, power winger Macauley Carson, talented Russian flank Kirill Nizhnikov, former first overall pick David Levin and blue line acquisitions in Cole Candella and Peter Stratis.

Sudbury’s first round pick last spring, Murray finished with the most points-per-game (0.77) of any player selected in the 2017 OHL Priority Selection. He’s the first rookie in Wolves history to finish the season in the team scoring lead.

“We’re excited about the good group of young players we have in the organization now and that we’ll have the chance to add more to that list this weekend,” Papineau added. “The player we take first overall is going to be a significant contributor to our hockey team. He’s going to come in and join a competitive young group that works hard and wants to win.”

There’s buzz in the community about the prospect of a new facility breaking ground in the near future, one that would be an upgrade on the 4,600-seat Sudbury Community Arena that opened its doors back in 1951 and has housed the development and ascension of such past Wolves stars as Ron Duguay, Dale Hunter, Mike Foligno, Glen Murray and Mike Fisher.

Owner and Sudbury native Dario Zulich purchased the club during the summer of 2016 and has a vision for the franchise into the future.

“As our owner has told numerous people, Sudbury is the centre of the hockey universe,” said Papineau. “You look at the map and the history of Sudbury  and all the different players that have come out of here, whether they were Wolves or just different people from the region – there’s a real long history.

“We want to build a winner here. The young man we select first overall is a central part of the process that will help us become that contender.”