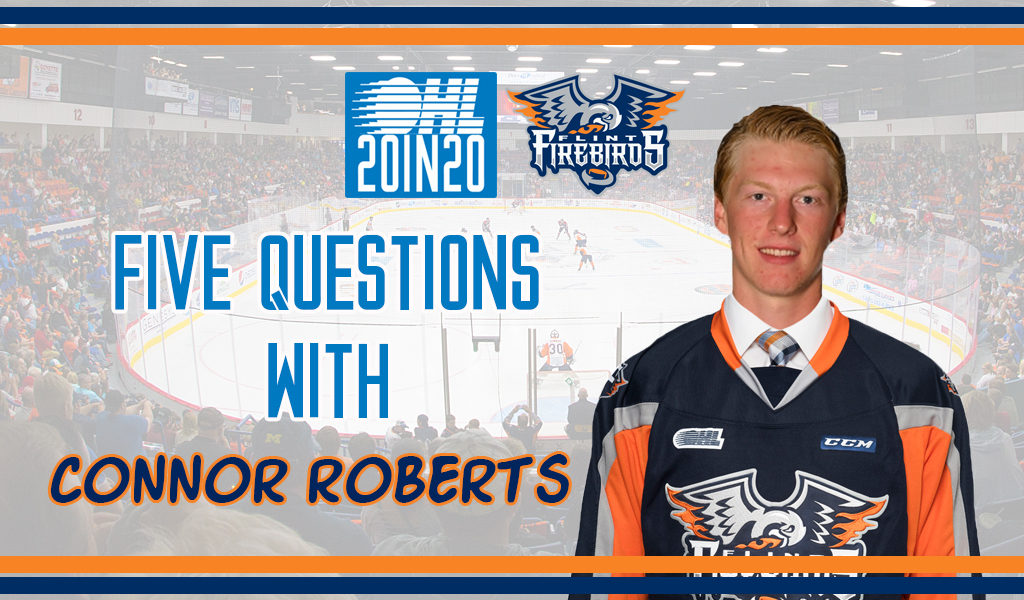 Connor Roberts begins his first full season in Flint after joining the Firebirds midway through his sophomore campaign.

The former third overall pick of the Hamilton Bulldogs developed his offensive game in new surroundings with 15 goals and 27 points in his final 44 games of 2017-18.

Roberts took time during Firebirds Training Camp to answer some questions and share his outlook on the season ahead.

How does it feel to start your first training camp in Flint?

“It feels pretty good coming off a good summer working on a lot of stuff I needed to improve on like my puck handling and my skating ability. It feels pretty good coming to camp knowing a few of the guys still from last year and meeting a bunch of the young guys, and the new guys we drafted. It’s a good environment this year. Everyone is really friendly, we’ve got a few new coaches, and I’m really looking forward to this season.”

How do you build on last year’s personal success after joining the Firebirds?

“Coming over to Flint halfway through last season I was given a lot more responsibility and I think I took that and played better with it. My point production increased and I became a lot more comfortable on the ice and I think that this season, my third season in the league, I think it’s going to be good. I had a good summer and I’m definitely going to be a lot more comfortable on the ice and hopefully playing with some good line mates this season it will be really good.”

How much are you looking forward to being a leader and go-to guy this year?

“This is my third year in the league and we still have a pretty young group and whenever the young guys need help on and off the ice I’ll definitely be there for them. Being a go-to player is obviously something I’d honour and want to be, strive to be that guy, so it’s going to be a fun season and hopefully I can produce.”

What advice do you have for this year’s rookies?

“Something I’ve learned is not to put too much pressure on yourself. It’s your first year in the league and you really just want to take it all in and just develop and learn from all the older guys and try to become more comfortable on the ice.”

What’s it going to take this season for the Firebirds to make the playoffs?

“I think it’s going to take buy in. We’ve got a pretty deep lineup this year and I know it doesn’t matter what line is on the ice we’re a threat. I think just buying into the process both on and off the ice, sticking to the game plan, I think that’s going to help us make the playoffs this year.”