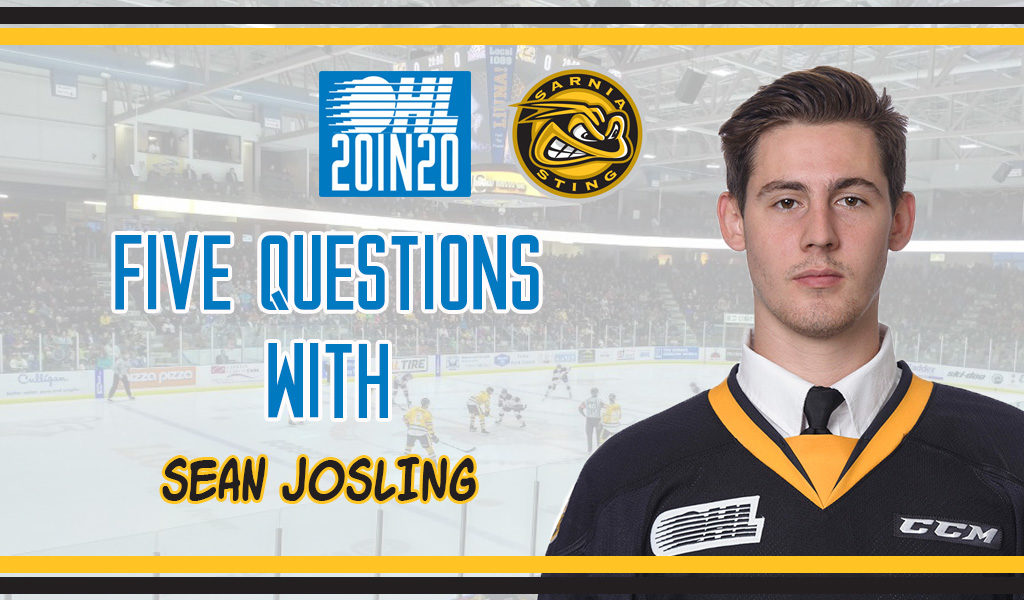 Sean Josling enters the Sarnia Sting’s 25th season as one of the team’s veterans returning for a third campaign after joining the team as an undrafted free agent in 2016.

The former Midget hockey national champion with the North York Rangers went from 21 points in 60 games during his rookie season to 38 points in 68 regular season games and an impressive 14 points in 12 playoff games a year ago.

Josling took time to answer some questions and share his outlook on the season ahead.

As a player who wasn’t picked in the OHL Draft, how did you turn disappointment into motivation to ultimately earn yourself a spot on this team?

“Not being drafted in the OHL is disappointing but it sets fire under my feet to work a little bit harder and a little bit extra every time.”

Last year’s Sarnia Sting set franchise records for wins and points. What is your best memory of the season?

“Obviously having a big run in the regular season with that 15-game win-streak was fun but definitely going to have to go with the playoffs playing Kitchener. I mean it was a battle. Bringing the boys together, I’m always going to remember that.”

You stepped up your game in Playoffs with 14 points in 12 games. What can you say about your performance?

“I can’t take credit for what happened in playoffs. I have to thank my line mates Ryan McGregor and Hugo Leufvenius. It was a battle for us throughout playoffs and it worked out for us.”

You’re one of the veterans this season. Describe your leadership style and what message do you have for the younger players?

“I’m going to try and be a leader on and off the ice and just work hard and hopefully the younger guys look up to me and follow my lead.”

What are your personal goals for the season?

“I want to keep contributing on the score sheet and have a very successful regular season but more importantly have a successful run in the playoffs.”