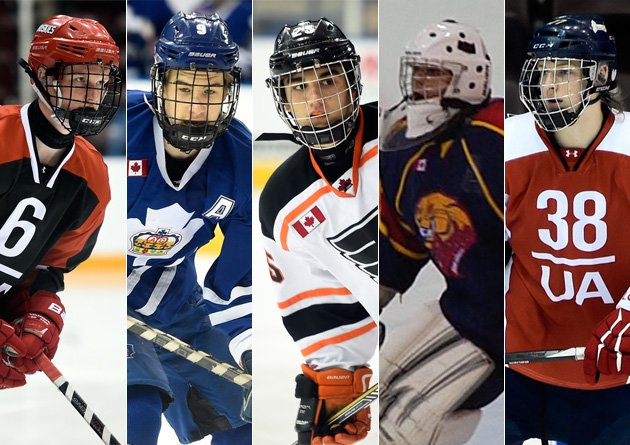 The 2015 OHL Priority Selection takes place online Saturday April 11 beginning at 9AM with the first three rounds shown live as part of a Draft Show webcast hosted at ontariohockeyleague.com and presented by State Farm.

The future of the Ontario Hockey League begins with the Priority Selection.  Here is a sample of some of the top minor midget prospects who will hear their names called by OHL clubs on draft day.

OHL Central Scouting says: Hayden is one of the top defencemen in this age group.  He is a defender that does everything very well.  He is a very strong skater with excellent mobility and explosiveness.  On the defensive side of the puck he is very hard to beat one on one, he is very good positionally, he reads and anticipates the play very well, is always on the right side of the puck.  He plays very hard, has a mean streak and rarely loses battles in the corners or in front of the net.  Hayden is very calm cool and collective with the puck on his stick.  He has very good vision and keeps the game very simple by making the easy obvious plays. He has a very hard and accurate shot from the point which he manages to get on net most of the time.

OHL Central Scouting says: Ryan will remind you a lot of his older brother Michael McLeod, who was selected fifth overall by the Mississauga Steelheads in the 2014 OHL Priority Selection. He is an effortless skater that can beat a defender as if he were standing still.  Ryan has the ability to slow the game down when he needs to and doesn’t always have to play the game at 100mph.  He is a playmaker first, and is always looking to set up his teammates. Was a consistent presence in the Marlboros lineup and was named 2015 OHL Cup MVP.

OHL Central Scouting says: Brett is a high end forward with great speed and is deadly off the rush.  He plays a lot bigger then 5’8″ and competes every shift. He’s not afraid to go to the dirty areas of the ice to score goals. A fun player to watch that was one of the leaders on a very good Don Mills team. Pursues the puck well and has the ability to finish his checks and play a more physical brand when needed. A player who is effective and responsible on both sides of the puck.

OHL Central Scouting says: One of the top goaltenders in the draft who won gold with Team Ontario at the 2015 Canada Winter Games in Prince George, BC. Battles hard and finds pucks through traffic. Uses his size effectively and has great reflexes. Is quick laterally and a good communicator with his defencemen. A very athletic goaltender who gave his Sun County team a chance to win on any given night.

OHL Central Scouting says: Reilly is one of the toughest stay at home defencemen is this years draft.  His compete level and physical play is off the charts. He goes into every corner with a purpose to hit and win battles. At 6’2″ he has very good mobility and is hard to beat off the rush and possesses the skating ability to jump into the rush offensively and get back and recover.  He has a cannon of a slap shot from the point but needs to improve on his accuracy and the speed of his release.  Overall Reilly is a tough physical defender that has the ability to log big minutes and play in key situations.