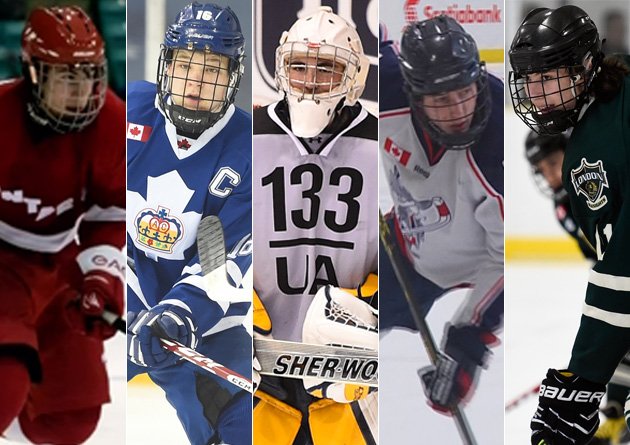 The 2015 OHL Priority Selection takes place online Saturday April 11 beginning at 9AM with the first three rounds shown live as part of a Draft Show webcast hosted at ontariohockeyleague.com and presented by State Farm.

The future of the Ontario Hockey League begins with the Priority Selection.  Here is a sample of some of the top minor midget prospects who will hear their names called by OHL clubs on draft day.

OHL Central Scouting says: Gabe is a big, strong centre who is hard to defend against and is gifted with hockey sense that is off the charts. He reads and anticipates plays very well in all three zones and is most effective when the puck is on his stick from the top of the circles down. His size and vision enables him to make plays in traffic. Gabe isn’t afraid to take the puck to the net and create offense for himself and his teammates. He shoots the puck very well with a quick release. The OEMHL Player of the Year has developed into a guy who desires to play 200 feet and contribute in all facets of the game.

OHL Central Scouting says: Matthew has a lot of similarities to his older brother Dylan when he was in Minor Midget. He is an intelligent player that has a very good stick and is hard to knock off the puck. He is an effective puck distributor but has a good shot that he could stand to use more often.  Matthew is very strong on the half wall on the powerplay and isn’t afraid to take the puck to the net when the opportunity presents itself. He has grown throughout the season and will go into the Priority Selection at 6’3″, 182Ibs. The Marlies captain scored the overtime winner to give his team an OHL Cup title.

OHL Central Scouting says: Brendan is one of the top goaltenders in this draft class. He played on a defensively oriented Titans team but had his share of strong performances this season. A very vocal goaltender that is always talking to his teammates and providing an extra pair of eyes for them. Brendan is a very good puck handling goaltender and assists his team frequently by moving the puck up ice. He is a big, active goaltender that moves well laterally and has shown the ability to control his rebounds.

OHL Central Scouting says: Zack is a big centre that skates very well and is a tenacious checker that is right on top of opponents before they have a chance to read and react. He is always working and moving his feet. His hard work and compete are very consistent, rarely does he take a shift off. He also has a good skill set and scored some pretty nice goals this season on a Rebels team that included some other offensively skilled contributors. He boasts the ability to play a solid 200-foot game and can mix in some offense as well. Zack does a very good job killing penalties and uses his size and skating as a strength to take away time and space on the PK.

OHL Central Scouting says:  Isaac has the look of a prototypical power forward. He moves around the ice well and wreaks havoc on opposing defencemen. He has a very good skill set and is dangerous with the puck in the offensive zone, using his big frame and skating ability to protect the puck. Isaac is good around the net and is a threat in around the crease, especially on the powerplay. He uses his size to create space for himself and is often rewarded for his work. He gives and receives passes well.