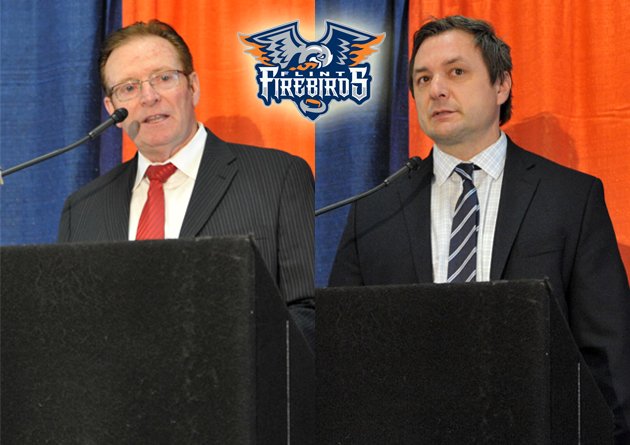 “Terry, John, Joe and Dave represent hockey experience and continuity for our organization,” said Flint Firebirds President Costa Papista. “Terry will lead our on-ice organization with more than three decades of elite-level hockey and recruiting experience. John is coming to Flint from the US National Team Development Program in Ann Arbor, MI and has a depth of experience in International and Junior hockey,” said Firebirds President Costa Papista.

“Joe and Dave were most recently Assistant General Manager and Head Scout of the Plymouth Whalers, which helps us with continuity as we assume control of this storied franchise”, Papista added.

A native of Minnetrista, Minnesota, Terry Christensen has most recently been Head Coach and General Manager of USA Selects Elite AAA Hockey Teams since 2001, he was also an Associate Head Coach with the Detroit Little Caesars U18 AAA Hockey Club over the past season.

Christensen also has former experience as the Director of Hockey Operations and Head Coach of the ECHL’s Tallahassee Tiger Sharks (1994-98) and has been an Assistant Coach at Michigan State University. Christensen coached the US National Junior Team in 1989.

A native of Virgnia, Minnesota, John Gruden has most recently been an Assistant Coach with the U.S. National Development Program, helping lead the United States Under-18 Team to gold at the IIHF World Under-18 Hockey Championships in Lappeenranta, Finland in 2013-14.

A former draft pick of the Boston Bruins, Gruden played 10 seasons of professional hockey including 92 games in the NHL and was a member of Team USA in the 2003 World Hockey Championships.