Foerster’s rise to stardom pushes Colts’ streak to the top 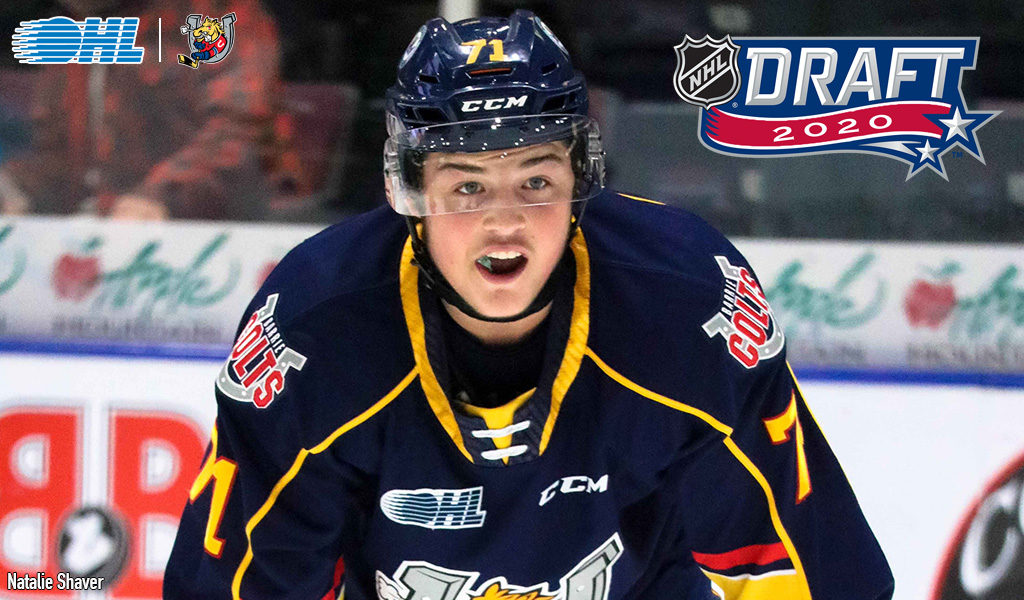 Barrie Colts right-wing Tyson Foerster put together one of the best breakout performances in 2019-20.

Following a 23-point finish as a freshman, the product of Alliston, Ont., exploded offensively last season to lead the Colts in all major offensive categories including goals (36), assists (44), and points (80). Such a showing made Foerster one of only 17 OHL skaters to reach the 80-point plateau and one of just five first-year draft-eligible skaters to do so.

Originally chosen in the third round of the 2018 OHL Priority Selection, Foerster quickly climbed the ranks over the past season, beginning with Central Scouting’s preliminary report ahead of the 2020 NHL Draft in which he was graded with a ‘C’, indicating a player likely to be chosen in the fourth round or later.

Over the course of the season, Foerster’s offensive opportunities continued to climb, as did his confidence, while his ability to shine under the spotlight was perhaps no more evident than his show-stopping performance at the 2020 Kubota CHL/NHL Top Prospects Game in Hamilton in which he found quick chemistry with his Team White linemates en route a two-goal, one-assist outing and a 5-3 victory for his side.

That ability to execute on the big stage wasn’t lost on the hundreds of onlooking talent evaluators as Foerster soon became part of the first-round conversation. Fast forward to draft day and he heard his name called 23rd overall by the Philadelphia Flyers.

“It’s obviously a dream come true,” Foerster told reporters following his first-round selection. “I had a couple of talks with the Flyers, they were really good, and I felt good about it. I was just waiting for them to pick, really.”

The Barrie Colts would like to congratulate Tyson Foerster on being selected by the Philadelphia Flyers in round 1, 23rd overall in the 2020 NHL Draft!#ColtsCountry #NHLDraft pic.twitter.com/oKZCciMP15

With the selection, it marked the third consecutive year in which a Colts player had been taken in the opening round – the longest active streak of any CHL club – coming on the heels of Ryan Suzuki going at No. 28 a year prior as well as Andrei Svechnikov’s second-overall selection in 2018, with both players chosen by the Carolina Hurricanes.

“Barrie has been huge to me, especially Dale (Hawerchuk) and Todd Miller. They helped me a lot through my career and they wished me the best,” added Foerster, who has since inked his entry-level contract with the Flyers. “It’s been an amazing journey and I am still looking forward to it.”

Part of that journey will be to continue working alongside the Flyers staff as Foerster inches closer to his pro career.

“I think playing under Dale Hawerchuk, he was very influential on Tyson’s career,” added Flyers general manager Chuck Fletcher. “Tyson obviously has a lot of offensive gifts. He can shoot the puck tremendously well. He’s a goal scorer, a playmaker with good hockey sense, and really good size. We were very, very happy with Tyson Foerster and excited he was still there at No. 23.

“He’s got a lot of attributes but Dale pushed him. I think the good thing about Tyson was good self-awareness of his strengths and areas he needs to improve and he worked very hard on those areas during the pause and we expect that he will continue to develop into a very good player.”

Likening his playing style to that of Washington Capitals forward T.J. Oshie, the younger Foerster mimics the pro’s ability to not only be a strong offensive contributor but to play a complete game, one that sees him to entrusted in all on-ice situations including special teams. Both Foerster and the Flyers believe that following such a model could fast track his route to Philadelphia.

“He is a pretty complete offensive player but I think in his own words he would tell you that he has a shoot-first mentality, which certainly doesn’t upset me,” Fletcher concluded. “We’re going to have to work hard with Tyson, and Tyson is going to have to work hard on his game to ensure he gets to the NHL, but this guy has a pretty good all-around skill set and for that time of the draft we were pretty pleased to select him.”