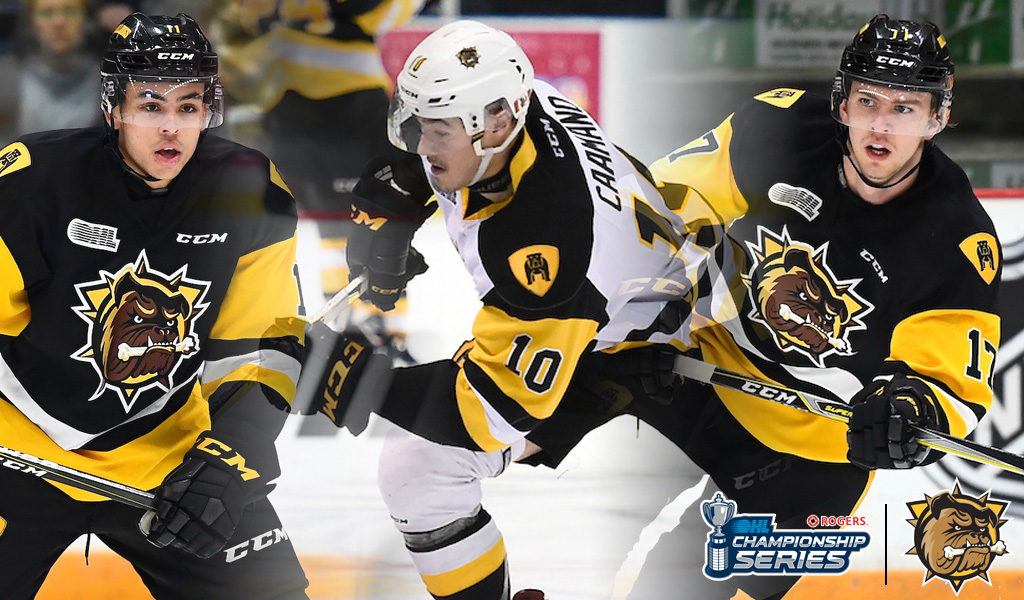 An organization committed to community involvement, it goes without saying that local roots run deep for the Hamilton Bulldogs, but for a group of homegrown players, tonight’s Game 3 of the Rogers OHL Championship Series carries with it an added level of nostalgia.

Brandon Saigeon, Nicholas Caamano, Isaac Nurse as well as 19-year-old forward Owen Burnell all grew up wearing the Bulldog on their chest as members of the Hamilton Jr. Bulldogs minor hockey program and each vividly remembers the last time the Bulldogs were in a championship series, hoisting the AHL’s Calder Cup on home ice with a team led by present day Montreal Canadiens star Carey Price in 2007.

Fast forward 11 years later and it’s their turn to lay it all on the line, entering Game 3 of the series tied up at one with the Sault Ste. Marie Greyhounds.

“I got to be at that game back in 2007,” Nurse recalled, “I got to see them raise the trophy and to be in that position now is pretty special. We want to make the most of the chance we have.”

A Dallas Stars prospect who came home to Hamilton midway through the season, Nick Caamano has enjoyed playing in front of friends and family at home games, something he didn’t get to experience during his first three OHL seasons between Plymouth and Flint.

“I have 10-15 friends or members of the family at every game, so I’m definitely grateful for that,” said the native of nearby Ancaster. “The fans in Hamilton are awesome and we’ve felt support from the whole community during this playoff run.”

Currently tied for second in OHL Playoff goal-scoring, Caamano’s minor hockey teammate Brandon Saigeon joins Justin Lemcke and Jack Hanley as one of three remaining Bulldogs who made the transition from Belleville at the outset of the 2015-16 campaign.

“It was kind of cool when we first got here to be able to show the other guys the ropes and already know the lay of the land,” said Saigeon, who played his minor hockey in Hamilton but grew up in nearby Grimsby. “Michael Andlauer and Steve Staios have done an unbelievable job with this franchise and what they’ve done for the city is incredible.

“Being in the Finals now we have a lot of work to do and we really want to come out on top for the city of Hamilton.”

It’s the first Rogers OHL Championship Series action in the Steel City since 1978 when the Hamilton Fincups fell in seven games to the Peterborough Petes. Two years prior, the Bert Templeton-coached Fincups defeated the Sudbury Wolves to be crowned OHL Champions before hoisting the Memorial Cup at the Montreal Forum following a 5-2 win over the New Westminster Bruins.

The Fincups are long gone, and through a series of relocations that include Brantford, back to Hamilton and Niagara Falls, actually operate as the defending OHL champion Erie Otters today.

It’s been a long time coming for Hamilton and the three homegrown talents are thrilled to play before what’s projected to be upwards of 6,000 fans at FirstOntario Centre in Game 3 tonight.

“We’re all extremely proud to have reached this point,” Saigeon continued. “I really look forward to hopefully being part of a championship team. We’ve put in so much work from the management, coaching staff down to the players.

“I can only imagine how it would feel to come out on top here.”

The puck drops tonight at 7:00pm and fans can catch every second of the action at OHLLIVE.com.