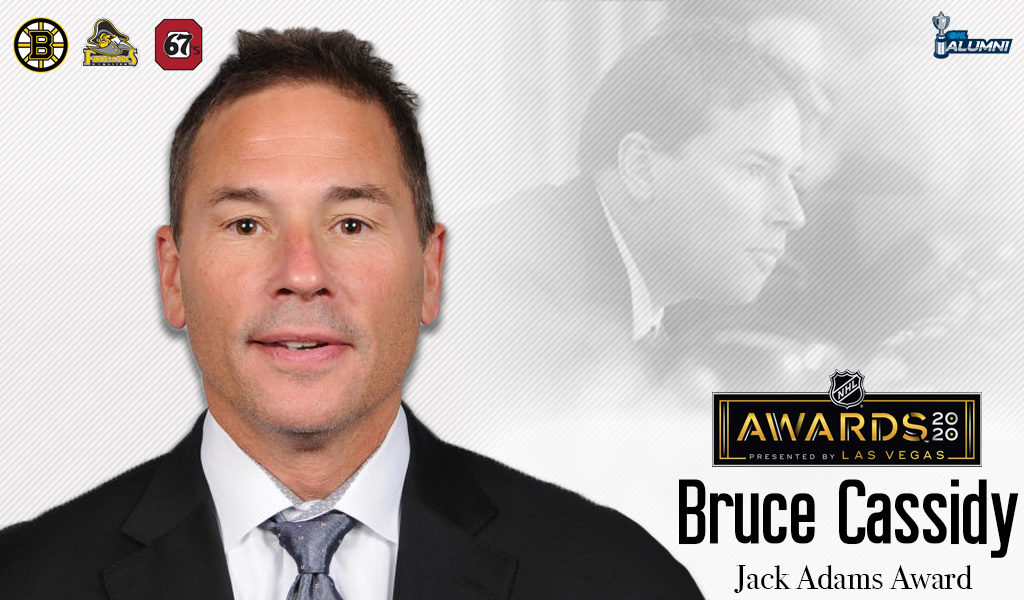 The National Hockey League announced Wednesday that Boston Bruins head coach Bruce Cassidy is the 2019-20 recipient of the Jack Adams Award. The honour is given to the League’s top coach as voted by members of the NHL Broadcasters’ Association.

Cassidy guided the Bruins to the NHL’s best record of 44-14-12, claiming the Presidents’ Trophy as the top regular season team. The Bruins surrendered the fewest goals in the NHL (167) and were tied for seventh in goals for (227). They owned the League’s second-ranked power play and third-ranked penalty kill.

The Bruins eliminated the Carolina Hurricanes in the first round of the 2020 NHL Playoffs before being eliminated at the hands of the Tampa Bay Lightning in five games.

A native of Ottawa, Ont., Cassidy starred on the blue line for his hometown 67’s from 1982-85, racking up 246 points (65-181–246) over just 165 career regular season games, placing him third in franchise points by a defender behind Denis Potvin and Doug Wilson. He was the OHL’s Rookie of the Year in 1983 before being selected 18th overall by the Chicago Blackhawks in the NHL Draft. He’d go on to hoist the Memorial Cup with the Barber Poles in 1984 before embarking on a 12-year pro career that included 36 NHL contests.

Behind the bench, Cassidy served as head coach of the Kingston Frontenacs over parts of two seasons from 2006-08. From Kingston, he spent eight seasons with the AHL’s Providence Bruins splitting time between assistant and head coaching duties before joining the Boston Bruins in 2016-17 where he has been ever since.

Cassidy edged out Columbus’ John Tortorella and Philadelphia’s Alain Vigneault for the award. He’s the first OHL alumnus to claim the award since Windsor Spitfires grad Claude Julien (Boston Bruins) did so back in 2008-09.