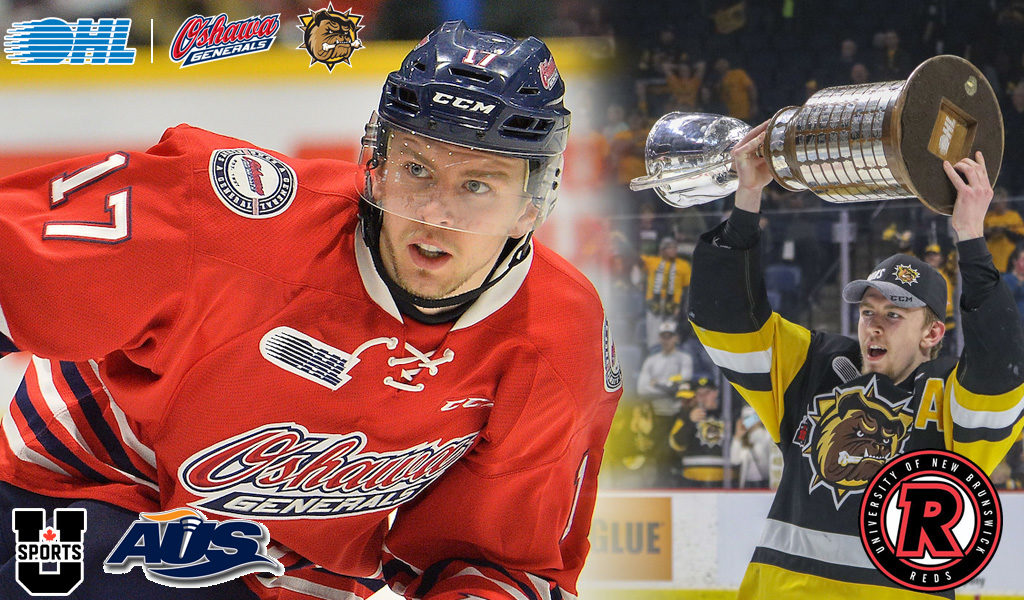 The 22-year-old, from Grimsby, ON, joins the REDS after a brilliant five-year career in the Ontario Hockey League and one season of professional hockey.

“UNB’s winning culture ultimately appealed to me,” said Saigeon. “I’ve heard nothing but great things about the coaches, players and the entire program. I know a lot of guys on the team, they’re high-level players and good people which was definitely a factor in my decision to choose UNB.”

Saigeon played a key role in helping Hamilton win the 2017-18 OHL championship, leading the team in playoff scoring with 18 goals in 21 playoff games.

In 2018-19, he split his final and most productive season between the Bulldogs and the Oshawa Generals, scoring a combined 37 goals and 55 assists, for 92 points in 68 games.

Chosen in the fifth round of the 2018 NHL Draft, by the Colorado Avalanche, Saigeon spent the 2019-20 season with the Utah Grizzlies, of the East Coast Hockey League. In 51 games with the Grizzlies, he scored eight goals and added 18 assists.

“My strengths as a player would be my shot and hockey IQ,” he said. “As a teammate, I bring leadership and a team-first mentality. Ultimately, I want to win and will do whatever it takes to help the team.”

“Brandon demonstrated an elite performance level during his OHL career, capped by his 92-point overage season,” said REDS head coach Gardiner MacDougall. “He has great offensive components, including his puck instincts, an excellent shot, and a relentless compete level.”

Saigeon becomes the third former Bulldog to join the REDS in the last year, following former teammates Isaac Nurse and Kade Landry to Fredericton. Nurse and Landry were members of UNB’s recruiting class of 2020.

“Kade and Isaac were one of the many reasons I chose UNB,” said Saigeon. “They’re both character teammates, on and off the ice, and they bring a lot to a team. I think having them here will make my transition easier. From our time together in Hamilton, I was able to get to know them well, and they’ve become really good friends of mine.”

With the 2020-21 Atlantic University Sport season lost to the pandemic, the REDS aren’t competing right now. They continue to train and practice, and Saigeon will join the team after his 14-day isolation period.

“We’re excited to welcome Brandon to our program,” said Coach MacDougall. “I want to thank our Director of Player Personnel, Dylan Taylor, for his work on getting Brandon here. Dylan was his usual persistent and enthusiastic self, and that helped Brandon make his decision.”

Read more about the Avalanche 5th round pick: https://t.co/Yf4yiegpGw