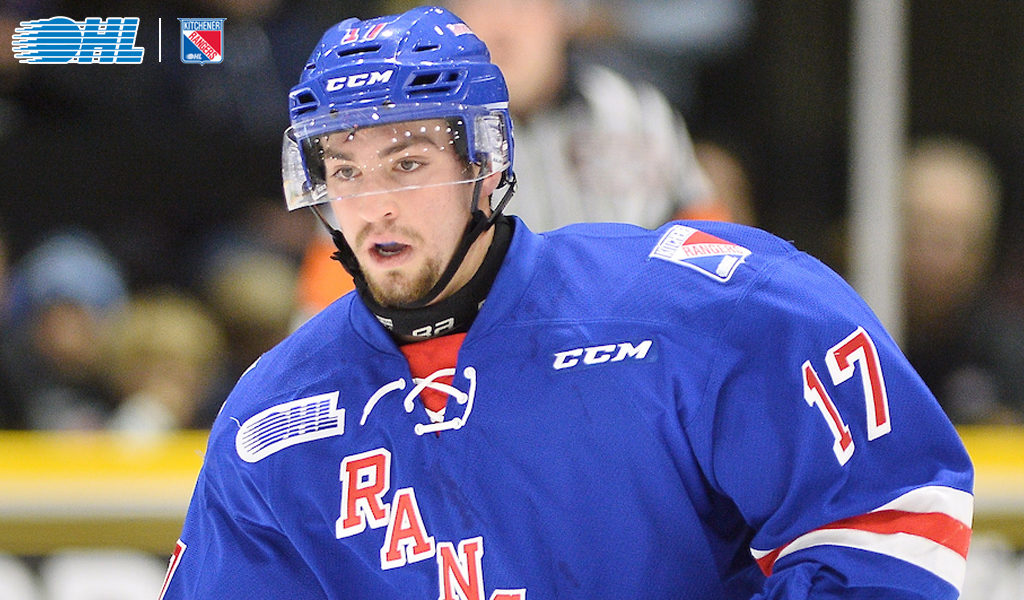 Mason Kohn feels right at home camping out on 40 acres of barren Arizona land in the middle of August.

That may be because he is – the plot is one of two that his dad Steven purchased a year ago. The other 80 acres under the family name are about 30 minutes away in Concho.

Blink, and you might pass right through either location. Mason and his dad nearly did on their first site visit.

After a fulfilling hockey career, Rangers alum @Masonkohn17 has shifted gears – which includes mountain biking across the US. 🚴

💬 “It’s the coolest thing in the world. My dad and I always make time for each other to do stuff like this.”

“We actually didn’t know how to get to the land last year,” the former Rangers forward recalled, laughing on the other end of the phone line from Sedona’s nearest town. “We got to the general area around 2 am and there aren’t any real roads.”

“So, we ended up pitching a tent on the random spot, and the next morning we met some people living off the grid to help us find the plot my dad had bought.”

Since then, they have marked it by GPS – turn by turn. A surveyor has even staked all four corners.

They might build a ranch or cottage on it someday, but it’s already a go-to destination in Kohn’s eyes. Not in a conventional way, though.

“This year, we just said let’s go across the country and ride the best mountain biking trail in each state along the way,” Kohn explained.

The pair left on August 8th at 6 am from their home in Hollywood, Florida, and six hours later, made their first stop in the state’s northern portion. Their first bike run was almost their last.

Kohn explained how, while misjudging a jump, he was flung over his handlebars. Luckily, his feet unclipped from the peddles, which prevented any serious injury.

Mississippi – and Mt. Zion mountain bike trail – was the next stop. On it went, state by state, until they ultimately reached their final destination. His sister Alison, who is conducting her research fellowship in dermatology this year at the University of Southern California, even flew out to meet them upon arrival.

“We’ve enjoyed the most phenomenal scenery and great runs,” Kohn said. “We’ll probably do this trip every year now.”

“It’s the coolest thing in the world. My dad and I always make time for each other to do stuff like this. This trip has been the best time.”

The 23-year-old certainly has a bit more time now to plan for future rides. After spending three and a half seasons playing in Kitchener, he completed his post-secondary education while playing varsity hockey at Queen’s University in Kingston – which included writing the LSAT exam.

“I studied for three months and was ecstatic with the result,” Kohn said.

His next step is getting into law school with a business law specification.

“Going from focusing on hockey to school is tough. I always excelled at hockey, and now my education is the main priority. I’ve been able to just buckle down and get the job done in the classroom,” Kohn said.

“Hockey’s not going to be around forever, so I’m just trying to get the most education that I can and see what happens in the future.”

A part of that education came from his off-ice time with the Blueshirts.

“The biggest thing was getting to learn how to work within a team plus looking up to leaders and seeing the qualities that they have – because, eventually, I was going to be in the same position they were in.”

“Being involved in the Rangers community initiatives was paramount to my future also because you learn to care even more about others.”

Even though his athletic pursuits have shifted slightly, Kohn still maintains the same characteristics that made him a fan favourite on the ice; tenacity and a solid work ethic.

Unknowingly to most, he broke into the team’s top 10 all-time for an American player’s points and games. He was also recognized with the Jim McGeachie Memorial Award for outstanding team effort after the 2015/16 season.

“My parents didn’t want me riding too much though when I was playing in the OHL, but I’ve gotten into mountain biking the past three or four years. It’s probably my favourite hobby now.”

It might have to do with the identical feeling of accomplishment that comes with navigating a challenging trail but still reaching your end goal.

“Trying to make the climb to the top of a mountain without putting your foot down for a rest and then, at 25 miles per hour, jumping off a boulder, and going into another trail section … it’s just the best.”