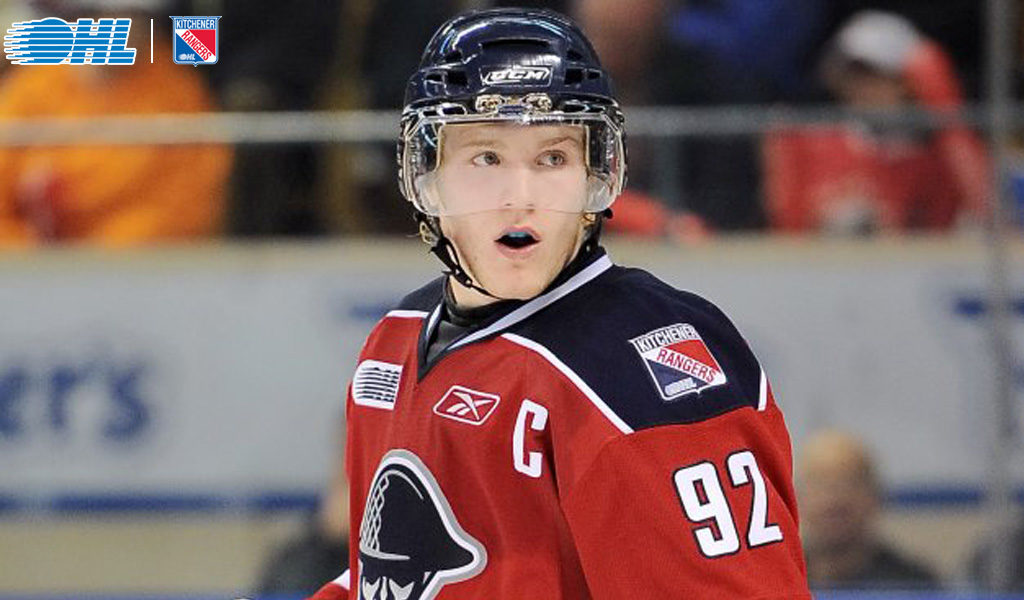 Once a Ranger, always a Ranger.

It’s a saying that rings true for Gabriel Landeskog, who took a quick trip down memory lane earlier this week when he hosted an Instagram Live Q&A on the Kitchener Rangers’ account (@ohlrangers).

The Colorado Avalanche forward and former Rangers captain spoke to fans about the excitement that came with moving from Sweden to Canada at 16-years-old, the lifelong friendships he’s maintained with former teammates, and the lessons that helped mold him into the decorated NHL player he is today.

The now 27-year-old, who proudly became a father this past November, has a plethora of good memories of his two-year OHL career spanning 2009-11. He fondly remembers the Rangers’ DJ. He remembers visiting the impressive new WFCU Centre in Windsor. He remembers tough battles against the London Knights.

When asked about his favourite memory, he made mention of the team’s playoff push to the Western Conference Championship Series during his rookie season in 2010, where they’d ultimately fall to the future Memorial Cup champion Windsor Spitfires. Within that playoff run, one game in particular stands out.

“I remember having a playoff hat-trick against the London Knights at home during my first year,” recalled Landeskog.

It was Game Two of the second round of the 2010 OHL Playoffs. Like many of the Rangers’ home games, it was a Friday night.

Those Friday night matches at the Aud were special. They had an atmosphere unlike anything he’d seen, and the arena always felt like home away from home.

“Friday night, you knew you had a home game, and it was just a blast knowing we were going to have 6800 Kitchener Rangers fans cheering us on. Everyone was super passionate,” he said.

The dedicated Kitchener Rangers fan base is something else he remembers extremely well. It’s the many people he’d see on a regular basis over those two seasons that he still misses most about living in Kitchener.

“I grew to fall in love with the City of Kitchener-Waterloo and the people, whether it’s teachers you have at high school at Eastwood Collegiate, equipment managers, coaches, or fans you go to meet every year,” he said. “I had an amazing billet family that took really good care of me, so I just miss the connections and people you make lifelong friendships with.”

Tuesday night’s IG Live with @GabeLandeskog92 will be a must-see.

Among those friendships is one with Buffalo Sabres centreman and former teammate Jeff Skinner. The two became close friends over the 2009-10 season and were roommates while travelling on the road.

“I felt he was a couple steps ahead of me in terms of being a professional and learning how to take care of yourself; things he did off the ice, things he did in practice and how hard he worked,” said Landeskog of his old teammate.

“I learned a lot from Skins and obviously it’s fun playing against him in the NHL.”

Along with Skinner, Landeskog’s two OHL seasons saw him suit up with a sizeable crop of skaters that, too, would eventually enjoy a taste of the NHL including Tobias Rieder, John Moore and Nazem Kadri. He’s enjoyed facing off against them over the course of his nine-year NHL career, and now once again shares the ice with Kadri as Colorado teammates.

“You feel you have this certain bond with guys who played in Kitchener,” he said.

Landeskog was drafted third overall in the 2009 CHL Import Draft. He finished out his first season third in OHL rookie scoring and would lead the Rangers with 36 goals at the end of his second term. He’d then go on to be drafted second overall by the Avalanche in the 2011 NHL Draft and win the Calder Memorial Trophy at the conclusion of his rookie NHL season.

The skills involved in becoming successful at the professional level, both on and off the ice, were skills he picked up throughout his junior hockey journey. He credits the coaching staff of Steve Spott, Paul Fixter and Troy Smith with teaching him to play both ends of the rink and in all situations – on the power play and on the penalty kill.

“Steve Spott really helped me out as a coach and taught me valuable lessons about being a leader, that you can’t really be pushing other guys and telling them what to do when you’re not doing your job on your own,” he recalled of his time in Kitchener.

Before he was named the NHL’s then-youngest captain in history back in 2012, he had donned the ‘C’ on his Kitchener sweater over his sophomore season. It’s an experience that transferred and prepared him for that leadership role on the grander stage.

“You have to take care of yourself and what you can do to lead the team in order to affect anyone else,” said Landeskog. “That was some valuable advice I got from Spotter.”

Hoping to pass on some of that same advice, he said he reached out to former Kitchener skater Rickard Hugg midway through last season when he, too, was awarded the Rangers’ captaincy.

“I told him you were named captain for a reason and that’s because of who you are, so don’t change and don’t try to be something you’re not,” he continued. “It was cool to be able to relay that information to a fellow Swede and somebody a little younger because I remember at that time I didn’t have anybody to reach out to or learn from.”

While moving away from his hometown of Stockholm at a young age was tough at times, the two-time World Champion gold medalist said he viewed it as a challenge that helped him mature a lot quicker, both as a hockey player and as a person.

Now, having accomplished so much both on and off the ice over 10 years later, he looks back on that challenge with a smile on his face.

“The organization is first class. I was well taken care of from day one,” he said of the Rangers. “I don’t think I’d be where I am today or the player I am today if it wasn’t for my time in the OHL.”