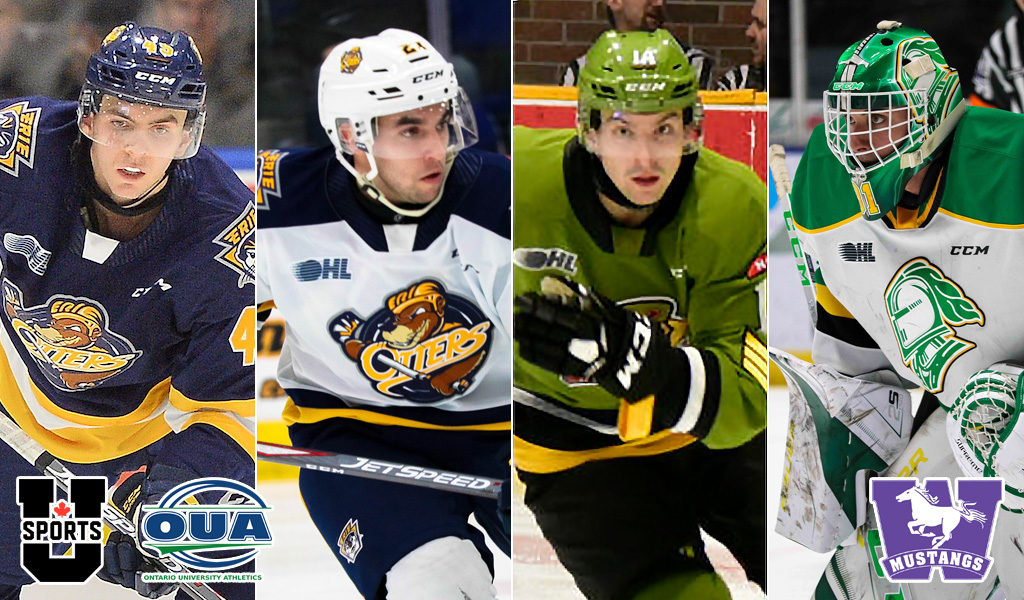 London, ON – The Western Mustangs Men’s Hockey team is pleased to announce six players have committed to the Mustangs beginning in the 2020-21 season.

“Coming-off a U SPORTS National semi-final in 2019-20 our expectations for this year are very high.” said Mustangs Head Coach Clarke Singer. “We feel our recruiting class adds some ingredients we lost due to graduation and will add to the depth of our team at all three positions.”

A 21-year-old native of Livonia, Mich., Hunter wrapped up a four-year OHL career spent between Niagara and Erie. He collected three goals, 26 assists and 29 points between the IceDogs and Otters this season, finishing his OHL tenure with 73 points (13-60–73) over 212 career regular season contests. The 6-foot-3, 191Ib. defenceman was originally a 12th round pick of Niagara in the 2016 OHL Priority Selection.

A 20-year-old native of Aurora, Ont., MacDougall played three OHL seasons between Windsor and Erie, recording six points (3-3–6) over an injury-shortened 21 game season in 2019-20. The 5-foot-10, 166Ib. left-winger collected 36 goals, 38 assists and 74 points over his 156 career regular season games and was originally Barrie’s third round pick in the 2016 OHL Priority Selection from the OHL Cup champion York-Simcoe Express Minor Midgets.

Hailing from Ilderton, Ont., the 20-year-old Bulitka played five OHL seasons between Sudbury and North Bay. Beginning the 2019-20 season as a co-captain in Sudbury, Bulitka put up a total of 23 goals, 29 assists and 52 points over 62 games that included 24 spent with the North Bay Battalion. The 5-foot-11, 184Ib. centre registered 160 points (57-103–160) over 259 career regular season games after he was originally a second round pick by the Wolves in the 2015 OHL Priority Selection.

A 20-year-old native of Winnipeg, Man., Myskiw makes his way across town to Western following a 23-game overage season with the London Knights that saw him go 12-6 with a 3.40 goals-against average, .891 save percentage and one shutout. The 6-foot-1, 180Ib. netminder spent much of his junior hockey career in the Western Hockey League, going 43-21-6-3 with a 2.87 goals-against average and .902 save percentage over 85 regular season games between Victoria, Brandon and Edmonton between 2016-20.

For more on these commitments, visit westernmustangs.ca.

M 🏒The Western Mustangs are excited to announce six new additions to the Men’s Hockey program for the 2020-21 season.