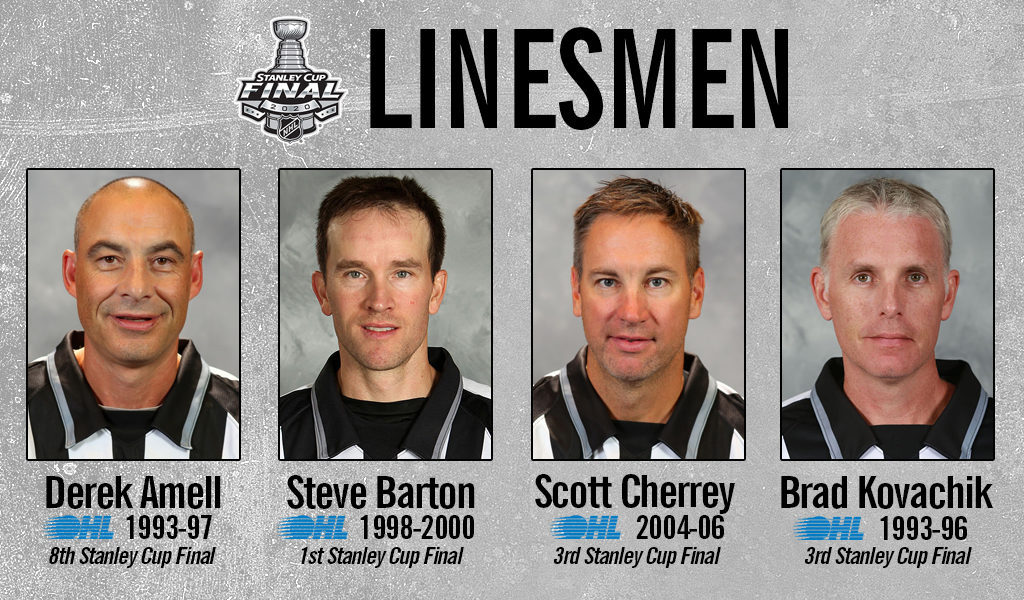 The players on the ice often make the headlines, but in the officiating world, working the Stanley Cup Final is a crowning achievement.

Four of the five linesmen named to the NHL’s Championship Series this year are OHL products, with Derek Amell (#75), Steve Barton (#59), Scott Cherrey (#50) and Brad Kovachik (#71) all rising through the officiating ranks with stops in the Ontario Hockey League.

The quartet is working the lines as the Dallas Stars and Tampa Bay Lightning play for hockey’s coveted grand prize. Game 3 of the series goes tonight with the two clubs tied at a win apiece.

Amell leads the group in working his eighth Stanley Cup Final. The Port Colborne, Ont. native officiated in the OHL from 1993-97, working his first game at the young age of 24. Amell worked the 1997 OHL Championship Series between the Oshawa Generals and Ottawa 67’s before signing his first NHL contract. He skated in his 1,500th career NHL game this past March.

Barton is in his first Stanley Cup Final. The 48-year-old from Vankleek Hill, Ont. broke into the NHL ranks in 2000 following two seasons in the Ontario Hockey League that saw him graduate after working the 2000 OHL Championship Series between the Barrie Colts and Plymouth Whalers. Barton has worked several high profile events over the course of his NHL career including an outdoor game between San Jose and Los Angeles in Santa Clara, Calif. in 2015 as well as the 2016 Winter Classic in Foxboro, Mass. between Boston and Montreal.

Cherrey played in the OHL prior to his officiating career, winning a championship with the North Bay Centennials in 1994. The Drayton, Ont. native played four seasons between North Bay, Sault Ste. Marie, Owen Sound and Sarnia from 1993-97 and was a second round pick of the Washington Capitals in 1994. A brief pro career followed two seasons playing at the University of New Brunswick before Cherrey later broke into the officiating world in the OHL from 2004-06. He made the jump to the NHL in 2007 and is now working his third Stanley Cup Final.

Kovachik, of Woodstock, Ont., began his officiating career at just 12 years old and eventually spent three seasons in the OHL from 1993-96. He worked the 1996 OHL Championship Series as well as the 1996 Memorial Cup Final in Peterborough, Ont. that saw the Granby Predateurs emerge victorious. Kovachik is skating in his third career Stanley Cup Final and has been working regularly in the National Hockey League since 1997.

The OHL wishes these accomplished alumni the very best in the 2020 Stanley Cup Final, and continues to develop the next generation of the game’s top officials.