Four OHL Players Selected in First Round of 2019 NHL Draft 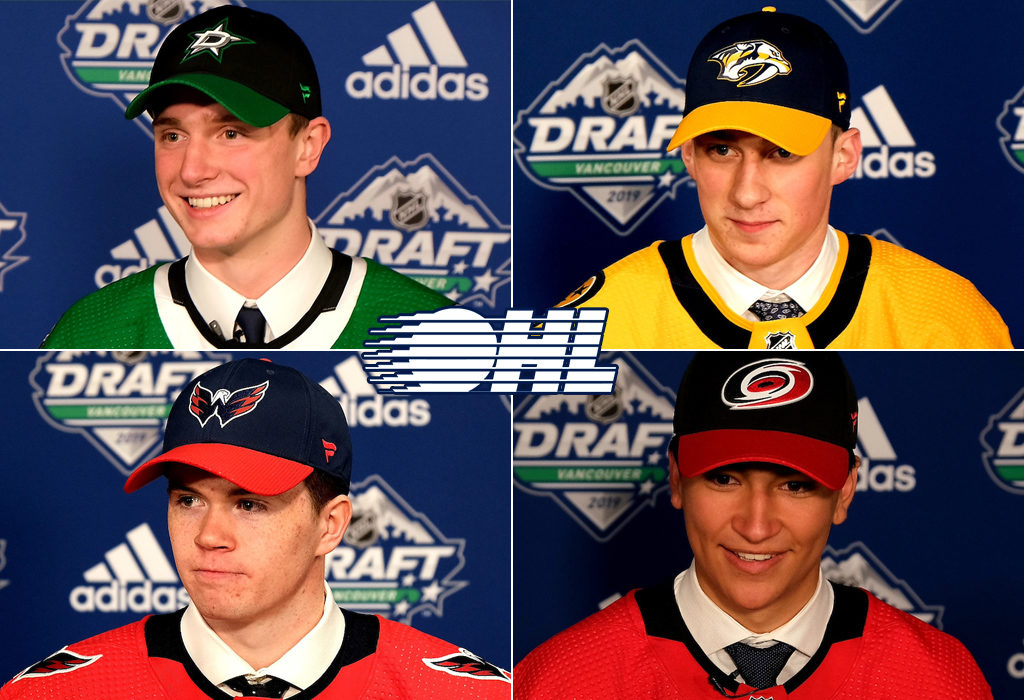 Vancouver, BC – The Ontario Hockey League today announced that four OHL players were selected in the first round of the 2019 NHL Draft held Friday night at Rogers Arena, home of the NHL’s Vancouver Canucks.

The four OHL players were among the 13 CHL players that represented nearly 42% of all players chosen in the draft’s opening round.

Mississauga Steelheads defenceman Thomas Harley led the way for the OHL, being selected 18th overall by the Dallas Stars. The 17-year-old native of Syracuse, NY becomes the highest-picked defenceman in Steelheads history and follows Owen Tippett (10th overall, 2017) as the second player in the past three years to serve as the League’s highest-drafted player.

“It feels amazing to join a great organization like Dallas with the great players and coaches they have there, it’s really exciting,” said Harley of the experience. “It’s just that great feeling knowing that they want me to be there and they picked me ahead of some other guys so it’s really nice.”

Niagara IceDogs forward Philip Tomasino followed Harley, being selected by the Nashville Predators at 24th overall. The 17-year-old Tomasino led the Canadian Hockey League in game winning goals with 12 this past season, increasing his goal-scoring total by an impressive 29 as a sophomore.

“It’s unreal,” Tomasino said excitedly. “A lot of guys say you can’t really describe it and that’s pretty true. It’s the best night of my life for sure and I know to be selected by Nashville it’s an awesome organization and I’m looking forward to the future for sure.”

Tomasino’s selection gives the IceDogs a pick at the NHL Draft for a 10th straight year. He’s the first OHL player selected by Nashville in the first round since Peterborough’s Austin Watson was chosen 18th overall back in 2010.

London Knights forward Connor McMichael was the second of back-to-back OHL picks, going 25th overall to the Washington Capitals. The 18-year-old McMichael made a 56-point offensive improvement in his sophomore season. He gives the Knights a first round pick at the NHL Draft for a fifth consecutive year, the CHL’s longest active streak.

“It’s awesome, I don’t think the feeling has really sunk in just yet but I’m really excited and really looking forward to heading to Washington,” said McMichael. “I’m very happy to be a Capital.”

The Carolina Hurricanes turned to the Barrie Colts in the first round for a second straight year, selecting sophomore centreman Ryan Suzuki with the 28th overall pick. Suzuki joins former Colts teammate Andrei Svechnikov (2nd overall, 2018) in the Hurricanes organization and follows in the footsteps of older brother Nick Suzuki (13th overall, 2017) to become the 10th brother combination in NHL history to both be selected in the first round.

“I was definitely a little nervous getting close to the end of the first round but Carolina believed in me and they selected me and I’m super honoured to get down there and be with the team,” said Suzuki.

OHL Players Selected in the First Round of the 2019 NHL Draft:

Click on player name below to watch NHL Draft video

For more information on the 2019 NHL Draft including full results visit www.nhl.com.