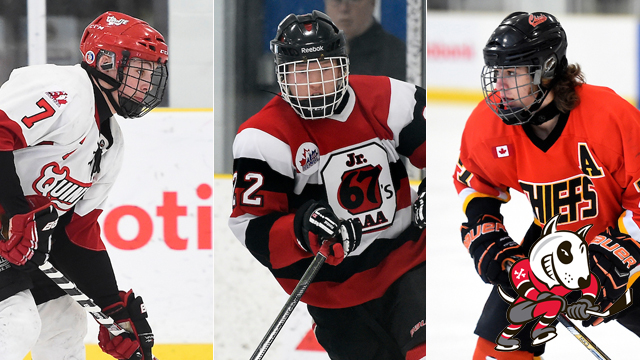 ST. CATHARINES, ON – The Niagara IceDogs are excited to confirm the signings of four prospects with the club. Director of Player Personnel Joey Burke announced Monday that forwards Ryan Smith, Oliver Castleman and Matthew Philip as well as defenceman Andrew Somerville have committed to the IceDogs.

Originally a 14th round pick in the 2015 OHL Priority Selection, Somerville had a dominant year in the Niagara District Junior C league last season. Playing for the Niagara Riverhawks, Somerville amassed 17 goals and 40 points through 42 games. This offensive output would see him lead the entire league for points by a defenceman.

“Andrew is a very smart defenceman that isn’t afraid to join the rush. He has great hockey sense that allows him to make plays most defencemen his age aren’t able to. To have him signed now means he’ll be able to grow with our younger team and that’s something that really excites me.”

A 5th round pick in the 2015 OHL Priority Selection by the IceDogs, Ryan Smith spent last season with the Trenton Golden Hawks of the OJHL. Through 42 games, he collected a goal along with six points. Smith also showed the physical side of his game, accounting for 37 penalty minutes over the course of the campaign.

“We are very excited to have Ryan on board with us,” said Burke. “He’s a talented player that works very hard and does everything we ask of him. He has excellent hockey sense and his ability to break-up plays is a rare quality that few players his age possess.”

Oliver Castleman spent last season with the Casselman Vikings Jr. B of the CCHL2 where he dominated with 19 goals and 56 points through just 37 games. He finished his season by winning both the Rookie of the Year award as well as the Prospect of the Year award, before being drafted in the 4th round, 78th overall in the 2016 OHL Priority Selection by the IceDogs.

“Oliver is an all-around impressive player that seems to do everything right,” said Burke. “He has great hockey sense and vision on the ice that allows him to find teammates anywhere. His ability off the puck is just as impressive. He seems to always know where the puck is going and is constantly breaking up plays and creating turnovers. We are very excited to have Oliver on board and look to him to be a big piece for us moving forward.”

A 9th round pick by Niagara in the 2015 OHL Priority Selection, Philip spent last season split between the St. Mary’s Lincolns and the Lambton Shores Predators Jr. B clubs, both of the GOJHL. Through 34 games, he contributed 20 goals and 29 points, most of which came with the Predators.

“We are very excited to confirm Matthew’s signing,” said Burke. “He’s a very quick and talented skater that is able to use his speed to his advantage. In addition to this, his has a very quick and accurate shot that he isn’t afraid to use. I can’t wait to see him develop into the offensive force that he can be.”