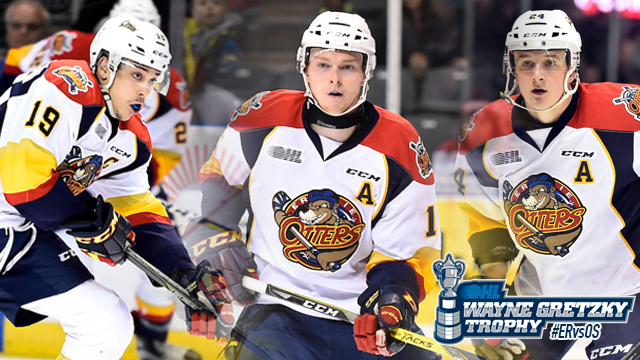 After becoming the first Canadian Hockey League team to ever record four straight 50 win seasons, the Erie Otters are once again finding themselves in elite territory.

Since the league’s two conference alignment in 1998-99, only the London Knights (2004-07) and the Toronto St. Michael’s Majors (2001-04) have competed for West or East supremacy four straight years.

During the Otters’ historic stretch the club hoisted the Wayne Gretzky Trophy just once in 2015 but ultimately fell short of their championship goal losing to the Oshawa Generals in five games.  That series was bookended by West Final defeats to Guelph and London in 2014 and 2016 respectively.

The Otters hope this season will be their year to celebrate the Flagship City’s first OHL title since 2002, an achievement that would be four years in the making for veterans Dylan Strome, Kyle Pettit, and Darren Raddysh.

“Team success is measured by playoff success and how far you go,” Strome said. “We’ve got the team to do it.  Getting over the hump (second round) against London was pretty special.  The crowd was like I’ve never seen our building before, and the emotions I had in that hockey game are probably the highest I’ve ever had.  Hopefully we can finish what we’ve started.”

Strome, now in his fourth season in Erie, helped build the Otters stretch of excellence alongside overagers Pettit and Raddysh whose Otters history even pre-dates today’s playoff success.

“The two previous years before we went four straight to the conference finals were two pretty rough seasons for us,” Pettit reflects. “The year before my first year they won 10 games, then they picked Connor McDavid first overall and I was a second round pick.  It was still a pretty rough season where we only won 19 games.  We just didn’t have the right attitude before every game.”

Head coach Kris Knoblauch, who also joined the team with Pettit and Raddysh in 2012-13, helped the Otters improve their systems and change their outlook.

“The way he coaches, that’s a huge part of our success,” Pettit added.  “After that first unsuccessful season we just had a winning attitude.  We weren’t just trying to win, we were supposed to win.”

“Coming into the league you just don’t know what to expect,” Strome said.  “You just come in as a young guy and you hear rumblings that the team might be good.

“Kris talked about it our first year, I’ll never forget it, he said this team hadn’t won a playoff series in over 10 years.  So that was our goal, to win a series and see how far we could go.  Since then we’ve just expected to be here.  I haven’t known anything different.”

In addition to playoff success the Otters helped develop the likes of McDavid, Connor Brown, and countless other veterans and current pros who helped pave the way including Adam Pelech, Brendan Gaunce, Andre Burakovsky, and Travis Dermott.

“It just shows the kind of culture we’ve built here in Erie since Kris came in and really took over the team,” said Raddysh.  “He pushed the mentality of really working hard and doing the little things right and it’s paid off.”

Only Josh Beaulieu and Robbie Drummond experienced the Knights run of four straight trips to the West Final, while Toronto’s Tim Brent was the lone mainstay in the Majors’ streak, leaving the Otters trio well aware of how fortunate a position they’re in.

“Being so far three times now you really let it sink in that this is your last chance and we’ve got a nucleus of this team to do it,” said Strome. “We really want to get it done seeing how close we’ve come.”

In order to achieve their ultimate goal the Otters first have their hands full with the Owen Sound Attack who enter Game 4 leading the series 2-1.

“Each game gets harder the deeper you get into the playoffs because teams just want it that bad,” said Pettit. “To win would be a storybook ending.”