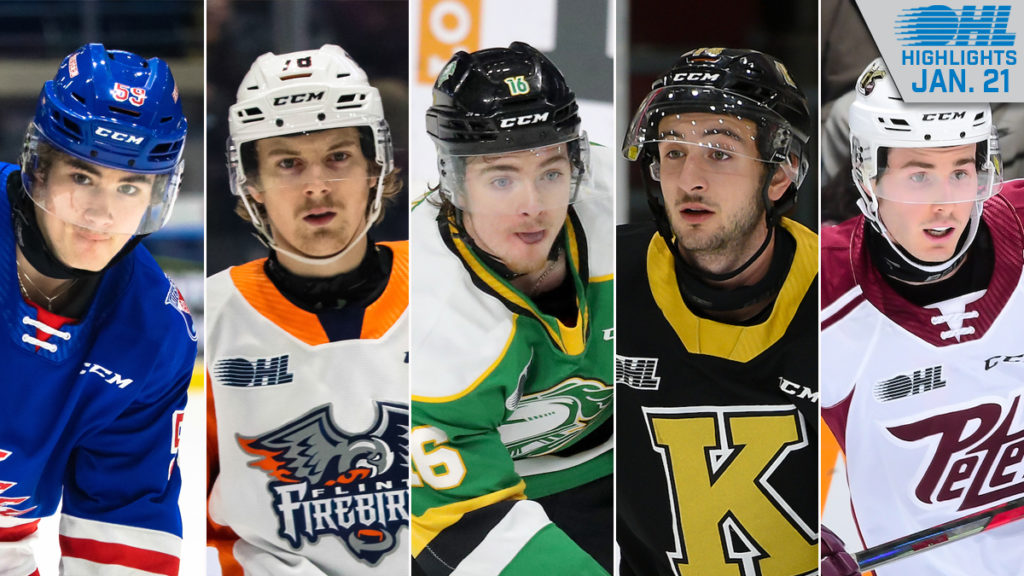 FLINT 6, SAGINAW 3
– The Firebirds secured the season series, capturing the I-75 Divide Cup for the first time since 2016-17 as Brennan Othmann recorded a career-high five points (1-4–5).
– Riley Piercey scored his 13th and 14th goals of the season while Sahil Panwar broke a 3-3 tie with 6:40 remaining in the third period for the game winner.
– 2022 NHL Draft prospect Pavel Mintyukov had a goal and an assist for the Spirit.
– Luke Cavallin earned the win in goal, stopping 28 of 31 opposite Saginaw’s Tristan Lennox who made 23 saves including one on an Amadeus Lombardi penalty shot attempt.
– The Firebirds improve to 19-13-0-2, claiming their fourth straight win over Saginaw.
– The Spirit have dropped five straight, falling to 13-18-1-0 for ninth in the Western Conference.
GAME CENTRE & HIGHLIGHTS

SAULT STE. MARIE 4, GUELPH 2
– Tye Kartye scored his League-leading 28th and 29th goals of the season, both coming on the power play as the Greyhounds won on TSN.
– Guelph turned it on in the third period with goals from Cam Allen and Valentin Zhugin but came up short.
– Tucker Tynan stopped 39 of 41 as the Greyhounds were outshot 41-30.
– Sault Ste. Marie improves to 21-12-2-1 for first in the Western Conference, claiming points in four straight.
– Guelph drops to 18-9-2-1 for fifth place in the Western Conference.
– Storm forward Matthew Papais missed the second half of action due to a lower body injury.
GAME CENTRE & HIGHLIGHTS

KITCHENER 4, WINDSOR 2
– Mitchell Martin recorded his first OHL hat trick as the Rangers snapped a four-game slide. Two of Martin’s goals came unassisted.
– The Rangers were outshot 36-25 but Pavel Cajan turned in a 34-save performance for the win.
– OHL scoring leader Wyatt Johnston extended his point streak to 11 games with his 21st goal of the season.
– Kitchener sits tied for seventh in the Western Conference with a 14-15-1-1 record.
– Windsor sits tied for third with Flint in the Western Conference with a 18-11-2-2 record.
– Rangers rookie Andrew LeBlanc was out of the lineup with an injury.
GAME CENTRE & HIGHLIGHTS

SUDBURY 4, OSHAWA 2
– The Wolves returned from seven straight on the road to earn their first home win since Nov. 26th.
– Dominik Jendek scored the game winner 8:57 into the third period.
– David Goyette scored his 13th goal of the season to remain tied for the OHL lead in points by a rookie with 31.
– Nick DeGrazia led Sudbury offensively with a goal and an assist.
– Mitchell Weeks stopped 29 of 31 for the win opposite Oshawa’s Zach Paputsakis who made 31 saves.
– The Wolves reverse a three-game slide, improving to 11-20-3-1, sitting tied for eighth in the Eastern Conference.
– Oshawa drops to 17-13-1-2 for a fifth place tie in the Eastern Conference standings.
GAME CENTRE & HIGHLIGHTS

OWEN SOUND 4, SARNIA 3 – SO
– Cedrick Guindon put together his first OHL multi-goal effort, recording two goals and an assist.
– Servac Petrovsky had a goal, an assist and a shootout marker in the Attack win.
– Stepan Machacek scored the shootout winner for Owen Sound while Nick Chenard followed-up 28 saves with a 4-for-5 performance in the shootout.
– Toronto Maple Leafs prospect Ty Voit scored twice, added an assist and scored in the shootout for Sarnia.
– The Bears improve to 15-13-1-2 for sixth in the Western Conference.
– Sarnia sits at 13-13-3-1 for a seventh place tie in the Western Conference.
– Attack have played eight of their last nine games on the road and will return home on Sunday against the Sting.
GAME CENTRE & HIGHLIGHTS

OTTAWA 4, NIAGARA 3 – OT
– Vinzenz Rohrer’s 10th goal of the season came with 1:33 remaining in overtime as the 67’s edged the IceDogs 4-3.
– Rookies Will Gerrior and Brad Gardiner scored for Ottawa while overage veteran Alex Johnston tied the score in the second period.
– Niagara’s Brenden Sirizzotti scored against his former club.
– Max Donoso made 27 saves for his second straight win in the Ottawa crease while Niagara’s Josh Rosenzweig stopped 25.
– The 67’s are now 16-18-1-1 for seventh in the Eastern Conference.
– Niagara sits at the bottom of the Eastern Conference with a 9-17-1-1 record.
GAME CENTRE & HIGHLIGHTS

PETERBOROUGH 7, MISSISSAUGA 4
– Emmett Sproule led the way with four points (2-2–4) as the Petes won for a second straight night.
– Petes blueliners Samuel Mayer and Donovan McCoy both recorded two assists.
– Steelheads rookie Zakary Lavoie recorded a goal and an assist.
– Mississauga outshot Peterborough 36-25 as Michael Simpson made 32 saves for the win.
– The Petes are 12-19-2-0, tied for eighth in the Eastern Conference.
– Mississauga saw a 10-game point streak snapped, with their record at 23-8-1-3 atop the OHL standings.
GAME CENTRE & HIGHLIGHTS

LONDON 6, ERIE 2
– The Knights fell behind 2-0 before responding with six unanswered goals.
– Sean McGurn and Luke Evangelista both recorded two goals and two assists for London.
– Camaryn Baber scored his first goal as a Knight.
– Ruslan Gazizov and Antonio Stranges both recorded two assists.
– Daniel D’Amato opened the scoring 1:21 into action for Erie before Brendan Sellan followed at 8:23.
– Brett Brochu stopped 35 of 37 to improve to 19-6-1-0 on the season. Marshall Nicholls made 28 saves for the Otters as Nolan Lalonde was out of the lineup.
– London joins the OHL’s 20-win club with a record of 20-9-1-0.
– Erie falls to 11-18-1-1 for 10th in the Western Conference.
GAME CENTRE & HIGHLIGHTS

A couple greasy net front goals contributed to a four-point effort from Sean McGurn (@seanmcgurn16) as the @LondonKnights scored six unanswered to get two points 🎥 pic.twitter.com/44CYNN7pv1

KINGSTON 5, HAMILTON 2
– The Frontenacs snapped a four-game slide, defeating the Hamilton Bulldogs who they fell 8-1 to last Sunday.
– Jordan Frasca scored his 21st and 22nd goals of the season while Martin Chromiak also had a multi-point showing for the Fronts.
– Lawson Sherk scored in his return to the Hamilton lineup, playing for the first time since Dec. 30.
– Mason McTavish was a late scratch for Hamilton.
– Ottawa Senators prospect Leevi Merilainen earned the win with 33 saves, stopping two penalty shots. Hamilton’s Marco Costantini stopped 29.
– The Fronts pull to within a point of East Division-leading Hamilton with an 18-9-3-0 record.
– The Bulldogs are now 18-10-2-2.
– Kingston has won three of four against Hamilton so far this season.
GAME CENTRE & HIGHLIGHTS

Tonight’s 3 Stars of the Game: #KGNvsHAM