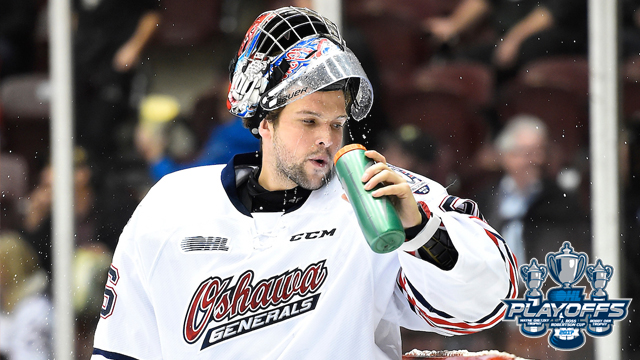 OSHAWA 3 – MISSISSAUGA 2 – OSH leads series 1-0
He’s been doing it all season and is showing now signs of stopping now. Overage goaltender Jeremy Brodeur made 50 saves to backstop the heavily outshot Oshawa Generals to a 3-2 Game 1 victory in Mississauga. Brodeur was outstanding from start to finish, holding off the Trout late as they took the third period shot tally 19-4. Both clubs went 2-for-5 on the power play as Joe Manchurek (4), Jack Studnicka (4) and Riley Stillman (1) found the back of the net for Oshawa. Studnicka finished the night with a goal and two assists as the Generals improved to 4-0 when outshot this postseason. Vili Saarijarvi (3) and Jacob Cascagnette (3) managed to solve Brodeur, but it wouldn’t be enough for Mississauga. Matthew Mancina returned to the crease, making 18 saves in the loss. Oshawa and Mississauga meet again on Sunday afternoon at the Hershey Centre.
GAME CENTRE

ERIE 5 – LONDON 1 – series tied 1-1
Tyler Parsons won the day on Thursday, but the Erie Otters would have none of it a night later, scoring five times as overage blueliner Darren Raddysh (4, 5, 6) became the first defenceman in franchise history to record a playoff hat-trick in a 5-1 home ice victory. The Otters once again got the better of London on the shot clock, outshooting the Knights 32-24 while going 2-for-4 on the power play. Tampa Bay Lightning prospect Taylor Raddysh (4) had a goal and two assists while Kyle Maksimovich (4) also found the back of the net. London’s lone goal came off the stick of defenceman Mitchell Vande Sompel (1). Erie won 62 percent of the game’s faceoffs with Kyle Pettit, Dylan Strome and Anthony Cirelli leading the way. Raddysh’s hat-trick also included an assist to give him four points on the night. His trio sees him join Vince Dunn (NIAG, 2015) as just the second defenceman in the past five years to record a hat-trick in the OHL Playoffs. Tied at one, the series shifts to London for Game 3 on Tuesday.
GAME CENTRE

SAULT STE. MARIE 4 – OWEN SOUND 1 – SSM leads series 2-0
The Soo Greyhounds took care of business in front of a big crowd, gaining a 2-0 series lead over the Owen Sound Attack with a 4-1 win in Game 2. Rookie forward Barrett Hayton (1, 2) opened the scoring with a pair of goals before Bobby MacIntyre (2) and Tim Gettinger (4) added others. Joseph Raaymakers was solid in the Soo crease, turning away 34 of the 35 shots he faced. Owen Sound’s lone goal came from Petrus Palmu (7) as the Attack went 0-for-6 on the power play. They suffer back-to-back regulation losses for the first time since December 3rd and 4th, both against Erie. Michael McNiven made 34 saves in defeat. The Attack look to regroup on home ice in Game 3 on Sunday evening against a Greyhounds club that has been very good on the road this season.
GAME CENTRE

2021-22 Recaps
Friday Highlights: A look across the League
22 hours ago