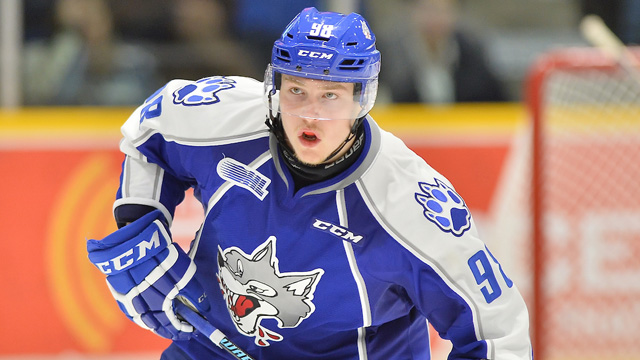 SUDBURY 6 HAMILTON 4
Minnesota Wild prospect Dmitry Sokolov (2, 3, 4) recorded a hat-trick and an assist as the Sudbury Wolves defeated visiting Hamilton 6-4. The Bulldogs made things interesting with a late push but the Wolves, with a 36-save performance from goaltender Jake McGrath, would hold on for the victory, halting Hamilton’s winning streak at four. Michael Pezzetta (1, 2) and Alan Lyszczarczyk (2) also scored for the Wolves, who improve to 5-2-1-0 for first place in the Central Division. Connor Roberts (2), Isaac Nurse (2), Matthew Strome (6) and Trent Fox (2) had goals for Hamilton.
GAME CENTRE

SAULT STE. MARIE 4 KINGSTON 1
Boston Bruins prospect Zach Senyshyn (1, 2, 3) recorded a hat-trick to go with 10 shots on goal as the Soo Greyhounds defeated Kingston 4-1 on the road. Senyshyn scored twice in the first period to open the scoring before capping off his hat-trick into the empty net in the third period. David Miller (7) also scored for the Hounds while Linus Nyman (3) responded for the Frontenacs. Rookie netminder Matthew Villalta turned aside 27 shots in front of his Kingston hometown crowd to secure the win for Sault Ste. Marie.
GAME CENTRE

ERIE 4 GUELPH 3 SO
Kyle Maksimovich (1) knotted the game at three with just 18 seconds remaining, forcing an eventual shootout where Ivan Lodnia scored the winner for Erie in a 4-3 road win over the Guelph Storm. The Otters had superb goaltending from Jake Lawr who made 34 saves before denying all four shooters he faced in the shootout. The Otters rallied from a 3-1 deficit behind other goals from Christian Girhiny (3) and Taylor Raddysh (5). Nate Schnarr (5), Albert Michnac (2) and Givani Smith (2) scored for Guelph. The Otters extend their winning streak to four straight games.
GAME CENTRE

FLINT 5 MISSISSAUGA 4
A pair of goals from Luke Kirwan (5, 6) got the Flint Firebirds started as they jumped out to a 5-0 lead on Pink in the Rink Night. The Mississauga Steelheads would use a 5-minute power play to get themselves back in the game though, scoring four unanswered to come up just short in a 5-4 loss on the road. Everett Clark (1), Ryan Moore (10) and Cullen Mercer (2) also scored for Flint while Owen Tippett (4, 5), Sean Day (3) and Brendan Harrogate (3) responded for the Steelheads. Flint blueliner Alex Peters added three assists, joining Kirwan and Clark with three points on the night. Firebirds goaltender Garrett Forrest made 31 saves to record the win.
GAME CENTRE

OSHAWA 5 PETERBOROUGH 2
A big second half pushed the Oshawa Generals to a 5-2 win over visiting Peterborough as Kenny Huether (1, 2) scored twice and Anthony Cirelli (5) picked up the game winner on a breakaway. Domenic Commisso (4) and Riley Stillman (1) also found the back of the net for the Generals, who outshot Peterborough 44-25 to hand them their fourth straight loss. C.J. Clarke (5) and Steven Lorentz (1) both scored for the Petes while Dylan Wells made 39 saves in goal. The Generals improve to 4-4 on the season.
GAME CENTRE

KITCHENER 6 SAGINAW 2
After no scoring through the opening 30 minutes, the Kitchener Rangers brought an all-out onslaught, potting six in the latter half of the game for a 6-2 win over visiting Saginaw. Rookie winger Greg Meireles (3, 4) had two goals and two assists while Toronto Maple Leafs prospect Jeremy Bracco (6) had a goal and two helpers. Connor Bunnaman (6), Dylan Seitz (2) and Dylan Di Perna (2) also scored for the blueshirts who improve to a Midwest Division leading 5-1-0-1. Mitchell Stephens (2) and Tye Felhaber (2) scored for Saginaw as the Spirit fall to 1-6-0-1.
GAME CENTRE