Friday Highlights: Firing up the weekend with overtime fun 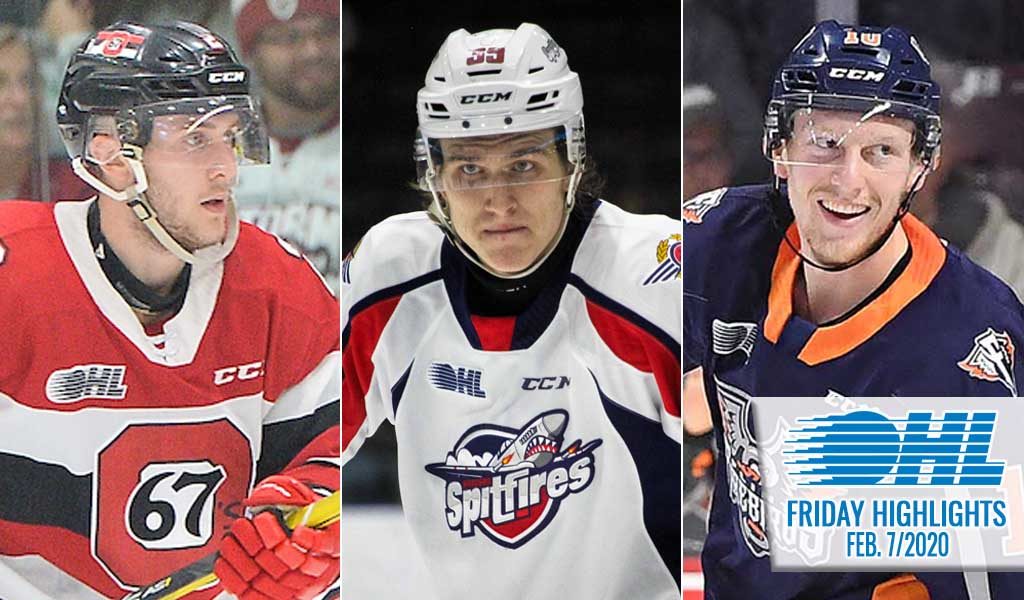 FLINT 5, ERIE 4 – OT
Make it eight straight wins for the Flint Firebirds as they surrendered a 4-2 lead before Connor Roberts (15) came through 28 seconds into overtime on a feed from Florida Panthers prospect Vladislav Kolyachonok. The Belarusian defenceman earned first star honours with a goal and two assists to his credit as the Firebirds earned their fifth straight road win, outshooting the Otters 38-27 in a 5-4 decision. Cody Morgan (13), Brennan Othmann (12) and Ty Dellandrea (29) joined Kolyachonok (10) and Roberts in the goal-scoring department while Luke Cavallin earned the win with a 23-save performance. Down 4-2 early in the third, Brendan Sellan (6) and Max Golod (20) drew the Otters even as they’d earn a point in the overtime loss. Daniel D’Amato (16) and Austen Swankler (13) scored other Erie goals while Daniel Murphy made 32 saves. Flint sits one point back of second place Windsor in the West Division with a 30-17-1-1 record. Erie falls to 21-18-4-6, four points up on the Soo Greyhounds for eighth in the Western Conference.
GAME CENTRE

OTTAWA 5, HAMILTON 4 – OT
No lead is safe against the CHL’s top-ranked Ottawa 67’s and they proved it again in Hamilton on Friday. The Barber Poles overcame a 3-0 hole out of the gate with Noel Hoefenmayer (20, 21) tying things at four with 18 seconds left in the third period before striking for the overtime winner in a 5-4 decision. Hoefenmayer, who leads OHL defencemen with 69 points, also has a league-leading plus-44 rating on the season. The OHL’s leading goal-scorer Jack Quinn (42, 43) potted two more while Austen Keating (24) also lit the lamp for Ottawa and Marco Rossi collected three assists to bring his point total to 91 (30-61–91). Logan Morrison (21), Navrin Mutter (7), Bradey Johnson (6) and Isaac Nurse (11) scored Hamilton goals while rookie Marco Costantini made 26 saves to help his team earn a point. Ottawa’s 10th straight win pushes them to 40-7-0-0 on the season while Hamilton maintains seventh in the Eastern Conference with a 20-22-6-1 record.
GAME CENTRE

WINDSOR 5, SARNIA 4 – OT
Rookie netminder Benjamin Gaudreau got a workout on Friday, stopping 60 shots to help his Sarnia Sting earn a point in a 5-4 overtime loss to visiting Windsor. Dallas Stars prospect Curtis Douglas (22) swatted home the overtime winner 1:11 into the extra frame to help the Spits snap a four-game slide, outshooting Sarnia 65-37 in the process. Veteran winger Cole Purboo tied the game at four with just 3:03 left in the third period, building off a two-goal performance from defenceman Connor Corcoran (15, 16). Columbus Blue Jackets prospect Tyler Angle (24) also scored for Windsor, tacking on three assists for a four-point night. Sean Josling (30), Jamieson Rees (18), Ryan Roth (21) and Brayden Guy (11) scored Sarnia goals as the Sting suffered a ninth straight loss to fall to 16-28-5-1 at the bottom of the Western Conference. Kari Piiroinen picked up the win in relief of Xavier Medina who left the game early in the third period and didn’t return. Veteran forward Luke Boka played in his 300th career OHL contest. Windsor gets back into the win column, remaining one point up on fifth place Flint in the Western Conference with a 29-14-5-0 record.
GAME CENTRE

OSHAWA 5, SUDBURY 2
Two-point nights from NHL Draft hopeful Ty Tullio and fifth year vet Kyle MacLean guided the Oshawa Generals to a 5-2 defeat of the Sudbury Wolves. New York Rangers draftee Nico Gross (9) got on the board early in the first period and Quinton Byfield (32) came back with the tying goal just 10 seconds later. The Gens then responded with goals from Tullio (24), Brett Neumann (35), and MacLean (11) for a 4-1 lead. Isaak Phillips (9) earned one more for the Wolves and Jacob Winterton (6) eventually extended Oshawa’s lead to a final 5-2. The Wolves outshot the Generals 41-28 but, with a third consecutive loss, now see their record fall to 25-24-1-0. They continue to lead the Central Division with the Mississauga Steelheads just one point below them. Byfield left the game with an injury and did not return. Oshawa improves to 26-17-4-2 at third in the East Division.
GAME CENTRE

KITCHENER 7, MISSISSAUGA 1
An early hat-trick from rookie Declan McDonnell (13, 14, 15) helped push the Kitchener Rangers past the visiting Mississauga Steelheads 7-1. McDonnell scored a pair less than two minutes apart, kickstarting a barrage of six straight goals from the Rangers. Dallas Stars prospect Riley Damiani followed up with his 21st on the year, before McDonnell wrapped up his hat-trick in the second period. New Jersey Devils pick Michael Vukojevic (4) and Reid Valade (18) struck next, before Florida Panthers pick Cole Schwindt (25) finally gave the Fish some life to spoil the shutout. Greg Meireles (24) scored the Rangers’ seventh and final goal in the third frame. The shots ended 40-29 in favour of the Rangers, rounding out a 39-save night for Los Angeles Kings prospect Jacob Ingham. The Fish fall to 23-24-3-1 and remain second in the Central Division, trailing the first place Sudbury Wolves by just one point. The Rangers sit second in the Midwest at 31-12-5-2, a point behind the streaking London Knights. Fifth-year forward Liam Hawel played in his 300th career OHL contest.
GAME CENTRE

LONDON 7, SAGINAW 3
Minnesota Wild prospect Matvey Guskov (11, 12) found the back of the net twice as the London Knights skated past the Saginaw Spirit 7-3 for their 10th straight win. The Spirit got off to a 2-0 lead thanks to Danny Katic and Dalton Duhart, who both scored their ninth goals of the season. London came flying back with six in a row off the sticks of Guskov, Washington Capitals draftee Connor McMichael (38), Nathan Dunkley (12), Columbus Blue Jackets prospect Liam Foudy (20), rookie Kirill Steklov (2), and Ryan Merkley, a San Jose Sharks pick (13). Duhart (10) notched a second on the night as the second period came to a close, and Guskov earned his second early in the third period to close out the scoring. The Spirit outshot the Knights 34-29 as Brett Brochu earned his 13th straight win. London continues to lead the Western Conference, maintaining a 34-13-1-1 record, while the West Division-leading Spirit drop to 31-14-2-2 on the year.
GAME CENTRE

KINGSTON 4, NORTH BAY 3
The Kingston Frontenacs held on for a 4-3 win over visiting North Bay on Friday, but the Troops made it interesting down to the final buzzer. Kingston climbed out to a 3-0 lead before North Bay inched back into the game, eventually coming within a goal in the final five minutes of regulation as Harrison Caines (5) and Shane Bulitka (20) scored third period goals. Kingston picked up two points as Dawson Baker (16), Francesco Arcuri (6), Vitali Pinchuk (7) and Zayde Wisdom (23) all found the back of the net in a game that saw them outshoot the Battalion 33-22 and go 2-for-8 on the power play. Luke Moncada (28) also had a goal for North Bay as the Troops dropped their sixth in a row, falling to 11-37-2-0. Kingston gains ground on the Niagara IceDogs and now sits just one point out of a playoff spot in the Eastern Conference, improving to 17-28-2-2.
GAME CENTRE

GUELPH 5, SOO 1
Andrei Bakanov (10, 11) scored twice and added an assist to the lead the Guelph Storm to a 5-1 win in Sault Ste. Marie. Pavel Gogolev picked up a pair of primary assists while Fedor Gordeev (3), Cedric Ralph (16) and Matthew Papais (8) also found the goal-scoring column, guiding the Storm to their 25th win. Montreal Canadiens prospect Cam Hillis picked up a pair of helpers while Nico Daws made 23 saves on a night where the Storm outshot the Hounds 35-24. Defenceman Robert Calisti (13) scored the lone Soo goal 7:49 into the first period and that’s all the offence they’d come up with. Guelph’s two points push them back ahead of Owen Sound and into sixth in the Western Conference with a 25-19-1-4 record. Sault Ste. Marie trails eighth place Erie by four points, dropping to 23-26-2-0 with losses in three straight.
GAME CENTRE

flint firebirds player of the week
OHL 'On the Run' Player of the Week: Tyler Tucker
7 hours ago