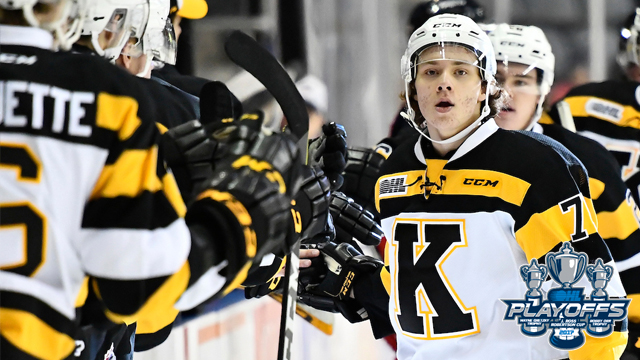 KINGSTON 4 – HAMILTON 2 – KGN leads series 3-2
After falling behind 2-0 to start the series, the Kingston Frontenacs have charged back to win three straight and take a 3-2 lead after a 4-2 win over the visiting Hamilton Bulldogs in Game 5. Jason Robertson (3) had a goal and two assists while Jeremy Helvig only faced 22 shots but came up with several quality saves as the Fronts continued their resurgence. Ryan Cranford (1), Stephen Desrocher (2) and Linus Nyman (2) also found the back of the net while Ted Nichol had a pair of assists. Centremen Sam Harding and Brett Neumann combined to go 22-for-32 in the faceoff circle, giving Kingston an edge in possession. Matt Luff (2) and Justin Lemcke (1) scored for Hamilton as the Bulldogs return home on the ropes in Game 6 on Sunday afternoon.
GAME CENTRE

OTTAWA 5 – MISSISSAUGA 3 – MISS leads series 3-2
Leo Lazarev made 51 saves to keep the Ottawa 67’s alive on the road, defeating the Mississauga Steelheads 5-3 despite being heavily outshot in Game 5. Lazarev’s acrobatics provided a number of highlight reel saves while a pair of goals from Artur Tyanulin (1, 2) led the attack at the other end. Tye Felhaber (2), Patrick White (2) and Jared Steege (1) also had markers for Ottawa while Spencer Watson (2), Nathan Bastian (5) and Michael McLeod (4) replied for the Steelheads. Mississauga outshot Ottawa 22-7 in the third period as the two sides combined for three goals in the final three minutes of the game. Ottawa returns home for an afternoon clash on Sunday with new life in the series.
GAME CENTRE

LONDON 2 – WINDSOR 1 – WSR leads series 3-2
The London Knights staved off elimination as Calgary Flames prospect Tyler Parsons came up with some big saves in a 2-1 home win over the Windsor Spitfires in Game 5. Tampa Bay Lightning prospect Mitchell Stephens (3) scored the game winner 12:09 into the second period as Parsons and Windsor’s Michael DiPietro swapped saves the rest of the way. The Knights held the Spitfires to 0-for-6 on the power play while outshooting them 29-26. Robert Thomas (1) also scored for London while Jeremy Bracco (1) provided the lone goal for Windsor. London controlled the faceoff circle in this one, winning 63 percent of the draws. This exciting series is going to a Game 6 on Sunday afternoon in Windsor.
GAME CENTRE

OSHAWA 4 – SUDBURY 1 – OSH leads series 3-2
As he’s often been this season, Jeremy Brodeur was a difference-maker with a 34 save performance in Game 5 as the Oshawa Generals defeated visiting Sudbury 4-1. Jack Studnicka (3), Renars Krastenbergs (2), Joe Manchurek (2) and Mason Kohn (2) scored goals as the Generals won despite being outshot 35-26. Oshawa held Sudbury to 0-for-6 on the power play, taking a 3-2 series lead headed north for Game 6 on Sunday night. Dmitry Sokolov (5) continues to produce, scoring for a fifth straight game.
GAME CENTRE

SAULT STE. MARIE 6 – FLINT 1 – SSM wins series 4-1
The Soo Greyhounds pulled away with four goals in the opening seven minutes of the second period to defeat the Flint Firebirds 6-1 and advance to the second round of the OHL Playoffs for the fourth year in a row. New York Rangers prospect Tim Gettinger (2, 3) had two goals and an assist while Morgan Frost and Conor Timmins each recorded three helpers in the commanding victory. Gustav Bouramman (1), Boris Katchouk (5), Zach Senyshyn (3) and David Miller (2) also had Sault Ste. Marie goals while Joseph Raaymakers made 21 saves. Columbus Blue Jackets prospect Kole Sherwood (4) scored the lone goal for Flint as the Firebirds were outshot 39-22. The Firebirds see their season draw to a close after they played to a 32-28-3-5 record, a 26-point improvement over their 2015-16 performance. Flint qualified for the OHL Playoffs for the first time in team history, winning their first postseason matchup in Game 2 of the series. The Hounds will face the Owen Sound Attack in the second round.
GAME CENTRE

OWEN SOUND 6 – KITCHENER 2 – OS wins series 4-1
The Owen Sound Attack wore down the Kitchener Rangers, taking a 6-2 win in Game 5 to punch their ticket to the second round. Petrus Palmu (6) scored the shorthanded game winner before adding a pair of assists while Nick Suzuki (4) had a goal and a helper as the Attack went 3-for-4 on the man advantage. Owen Sound outshot Kitchener 38-28 as Ethan Szypula (2), Santino Centorame (3), Matthew Struthers (2) and Kevin Hancock (4) also had goals while Michael McNiven made 26 saves. Philadelphia Flyers prospect Connor Bunnaman (3, 4) accounted for both Kitchener goals. The Rangers see their season come to an end after playing to a 36-27-3-2 record for 77 points. The Attack will face the Sault Ste. Marie Greyhounds in the second round of the OHL Playoffs.
GAME CENTRE