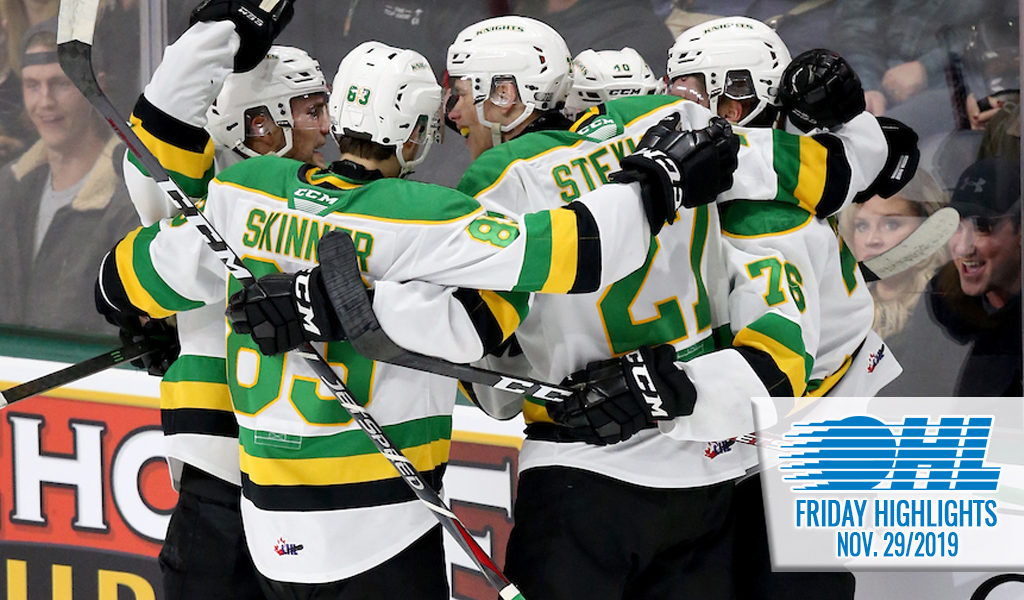 LONDON 6, WINDSOR 3
Make that five consecutive wins for the London Knights, who earned a 6-3 victory in their home barn over the Windsor Spitfires Friday night. Leading scorer Connor McMichael (24) put London up 1-0 late in the first period, before Nathan Dunkley (4) and 2020 NHL Draft prospect Antonio Stranges (9) widened things to 3-0. Windsor’s Daniel D’Amico (7) cut the lead to 3-1, but three consecutive goals from Liam Foudy (12), Cole Tymkin (4), and Luke Evangelista (8) gave London the 6-1 advantage. Connor Corcoran (8) and Chris Playfair (1) nabbed two more before the clock ran out, but the Spits would suffer their first regulation loss since Oct. 11. Kari Piiroinen faced 40 shots in net for Windsor, while London’s Dylan Myskiw stopped 21 of 24. Knights first round 2019 OHL Under-18 Priority Selection choice Jacob Chantler made his OHL debut. The Knights earn win number 15 of the year and currently sit second in the Midwest Division below Guelph’s 34 points. Windsor falls to 15-4-3-0 but maintain their West Division first place status.
GAME CENTRE

PETERBOROUGH 5, HAMILTON 3
The first place Peterborough Petes came up big in Friday’s tilt against the Hamilton Bulldogs, skating to a 5-3 win at FirstOntario Centre. Arthur Kaliyev (28) got things rolling for the Bulldogs only seven seconds into the game, which is just one second short of a franchise record, but goals from Arizona Coyotes prospect Liam Kirk (13, 14) and Declan Chisholm (4) put the Petes in the lead before the end of the first period. Jan Jenik’s (20) early second period goal tied the score, but Tucker Robertson (5), Kirk, and Zach Gallant (13) put Peterborough back in front. A final goal from Hamilton’s Tag Bertuzzi (12) would land 5-3 as the final score in Peterborough’s favour. Hunter Jones made 24 saves in net for the Petes, and Zachary Roy shut down 28 of 33 shots. Three points (1-2-3) on the night for Jenik keeps his point streak alive and well at 24 straight games, while leading OHL scorer Kaliyev’s three point night (1-2-3) extends his point streak to game 14. Their 18th win of the year keeps the Petes first in the OHL with 38 points, and Hamilton sticks around at fourth place in the East Division with a 12-14-1-0 record.
GAME CENTRE

KINGSTON 4, NORTH BAY 3
The Kingston Frontenacs came back from a 3-0 deficit to win 4-3 over the North Bay Battalion on home ice as rookie standout Shane Wright (11) scored the game winner with just 55 seconds left in regulation. The Battalion jumped out in front early as Mitchell Russell (7), Luke Moncada (12), and Brad Chenier (12) found the back of the net within the first twenty. Justin Pringle (1) earned his first goal on the year 6:57 into the second period, cueing the Teddy Bear Toss. The final period saw Kingston leading scorer Zayde Wisdom earn his 14th of the year and third-year winger Jordan Frasca (5) tie the game at 3-3 with 7:51 remaining. Wright scored with 55 seconds left on the clock to give the Fronts their fifth win in the past six games. Rookie Joe Vrbetic stopped 35 of 39 shots faced in net for North Bay while Kingston;s Christian Propp made 22 saves against his former club. Kingston improves to 6-15-2-2, remaining fifth in the East Division while the Troops fall to 5-21-0-0.
GAME CENTRE

NIAGARA 5, SARNIA 2
The Sarnia Sting certainly had their chances, outshooting the Niagara IceDogs 36-24, but solid goaltending from Tucker Tynan took care of things as Sarnia fell 5-2 at home in a third straight loss. Ivan Lodnia (13) scored a late first period goal to get the Dogs up on the board, but overager Ryan McGregor (7) answered just over a minute later to even things up at one. Akil Thomas (12, 13) got one midway through the second before Sarnia’s Nolan Dillingham (1) put up his first career OHL goal, tying things up once again. The IceDogs got three more past Sarnia rookie netminder Benjamin Gaudreau, and the Sting were unable to recover. Gaudreau stopped 19 of 24 shots in his fifth game with the Sting, while Tynan made 34 saves in his 20th game, bringing his save percentage to .912 and goals against average to 3.76 with a 9-7-3-1 record. The Sting fall to 11-13-0-0 while the IceDogs’ record at third place in the Central Division improves to 10-12-3-1.
GAME CENTRE

SUDBURY 3, BARRIE 2
The Sudbury Wolves snapped their four-game losing streak as Toronto Maple Leafs prospect Kalle Loponen scored the overtime winner in a 3-2 decision over visiting Barrie. Carolina Hurricanes prospect Blake Murray (13, 14) gave Sudbury an early lead, but Colts leading scorer Tyson Foerster (15) matched his goal just 26 seconds later. Barrie’s Victor Hadfield (4) lifted the Colts to 2-1 3:37 into the second period, but Murray answered eight seconds later to even things up. After a scoreless third period, Loponen (6) scored 1:44 into overtime to give the Wolves their first win since Nov. 15. Jet Greaves made 29 saves in net for the Colts, and Sudbury’s Christian Purboo stopped 27 of 29. Their third straight loss keeps the Colts second in the division at 12-8-1-1, while first place Sudbury improves  15-11-1-0.
GAME CENTRE

GUELPH 6, SAGINAW 2
The Storm’s point streak lives on as they dominated the visiting Saginaw Spirit in a 6-2 tilt. First-year forward Jacob Roach (4, 5) earned first star honours with two goals and an assist as Guelph climbed to 15-4-1-3 atop the Midwest Division. Pavel Gogolev (14) and Saginaw’s Cole Perfetti (13) traded first period goals, but Guelph’s offense stepped things up in the second with three more from Roach (4, 5), Danny Zhilkin (3), and Matthew Papais (4). Ethan Cardwell (8) scored the Spirit’s only other goal of the night 7:39 into the second. Roach and Andrei Bakanov (6) sealed the deal for the Storm within the final twenty, giving them their second straight win and 13th straight game with at least a point earned. Two more points on the night lifts the Storm past the London Knights to first place in the Midwest Division with 34 points. Saginaw’s record takes a hit at 14-9-1-1, keeping them third in the West Division and tied with Flint for 30 points overall.
GAME CENTRE

KITCHENER 3, OWEN SOUND 0
The Owen Sound Attack were left off the scoresheet Friday night in Kitchener, as Lucas Pfeil earned his first career OHL shutout in a 3-0 contest. Liam Hawel (9) scored a minute and a half into the game to secure a 1-0 lead within the first twenty minutes. Isaac Langton (2) picked up his goal of the season early in the second period, and Dallas Stars prospect Riley Damiani (10) scored one more with just over a minute to go in the third. Pfeil, who hails from Owen Sound and is currently in his third year with the Rangers, made 24 saves, while his team put 28 shots on Owen Sound goaltender Mack Guzda. Their ninth win of the year helps the Rangers to a current 22 point total, as they remain just two points below the Attack in the Midwest Division’s fifth place spot.
GAME CENTRE