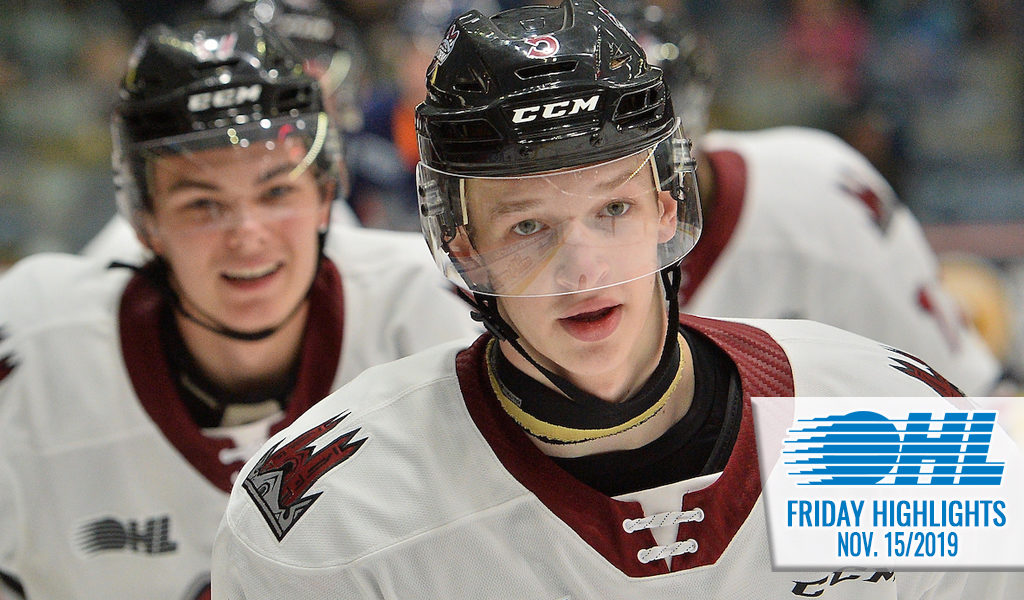 GUELPH 4, OWEN SOUND 3 – OT
Make that seven wins in a row for the Guelph Storm who edged visiting Owen Sound 4-3 in overtime. After a scoreless but fast paced first period, goals from OHL veterans Pavel Gogolev (12) and Josh Wainman (3) put Guelph up on the board with a 2-0 lead. Daylon Groulx (8) took advantage of a turnover and went top corner to cut their lead in half midway through the second. After drawing a penalty, Gogolev sent the puck over to Cedric Ralph (9) who scored on the powerplay. Adam McMaster (6) scored another for the Attack and Matthew Philip (10) evened things up with just 30 seconds remaining, sending the game to overtime. Daniil Chayka (8) ultimately won it for the Storm at the 2:19 mark, benefitting from the fine work of teammate Cam Hillis to make the goal possible. The Midwest-leading Storm will look to extend their win streak to eight Sunday afternoon when Saginaw comes to town, while the Attack host the last place Kingston Frontenacs on Saturday night.
GAME CENTRE

WINDSOR 7, ERIE 6 – OT
Vegas Golden Knights prospect Connor Corcoran (5, 6) scored the overtime winner for the Windsor Spitfires in an action-packed 7-6 road win over the Erie Otters. Brendan Sellan (2) got the Otters on the board early in the first period before the surging Spitfires responded with three straight goals from Jean-Luc Foudy (8), Will Cuylle (5), and Daniel D’Amico (6). Erie’s Austen Swankler (5) and Chad Yetman (14, 15) tied things up early in the third, but Windsor jumped ahead thanks to goals from Corcoran and Tyler Angle (12). Three more Erie goals off the sticks of Emmett Sproule (6), Yetman and Jack Duff (3) pushed the Otters into a 6-5 lead, but Windsor tied things up with 22 seconds to go as Dallas Stars prospect Curtis Douglas (9) knotted the score at six.  Corcoran ultimately won the game just 46 seconds into OT on Egor Afanasyev’s third assist of the night. Windsor outshot Erie by a whopping 42-28 and will look for their second straight win in Niagara Saturday night. They improve to 12-3-2-0, while Erie falls to 9-6-2-3.
GAME CENTRE

KITCHENER 4, KINGSTON 3 – SO
The Kingston Frontenacs entered play on an 11-game slide, but gave the Kitchener Rangers quite a fight at The Aud on Friday, earning a point as the Blueshirts took a 4-3 shootout victory. The Fronts led 3-2 until Kitchener’s Jonathan Yantsis (10, 11) scored his second of the night with 15 seconds left in the third period to tie things at three and force overtime. Greg Meireles (3) scored in his first action since October 19th while Arizona Coyotes prospect Axel Bergkvist collected a pair of assists. Dawson Baker (4), Zayde Wisdom (10) and Dustin Hutton (3) responded with Kingston goals while Jordan Frasca picked up a pair of assists. Kingston rookies Shane Wright and Francesco Arcuri both scored in the shootout but the Rangers countered with goals from Meireles, Liam Hawel and Reid Valade who netted the difference-maker. Kitchener outshot Kingston 34-23 as Christian Propp made 31 saves in his Frontenacs debut opposite Kitchener’s Lucas Pfeil. A pair of young stars in Kingston’s Wright and Kitchener’s Francesco Pinelli returned to the lineup after serving at the World Under-17 Hockey Challenge. The Rangers snap a three-game slide, improving to 7-6-2-2. Kingston falls to 1-14-2-2.
GAME CENTRE

SOO 4, HAMILTON 3
Jan Jenik (16, 17) put up another two goals, extending his point streak to 19 games but the Hamilton Bulldogs came up short in Sault Ste. Marie on Friday. Montreal Canadiens prospect Jacob LeGuerrier (2) netted the game winner with just 38 seconds left in the third period as the Soo Greyhounds took their second consecutive win in a tight 4-3 decision. Sophomore forward Rory Kerins (11) opened the Greyhounds’ scoring 8:55 into the first period. Minutes later, rookie Jacob Holmes (1) followed up with his first OHL goal, lifting the Soo up 2-0. Jenik cut the lead in half, getting one past Bailey Brkin from the right circle midway through the second before Zack Trott was awarded a penalty shot that was turned aside by Hamilton rookie Marco Costantini. Tye Kartye then put the Greyhounds up 3-1 early in the third period, but Hamilton responded with two more goals from Logan Morrison (8) and Jenik. LaGuerrier sent a point blast through traffic that fluttered over the goal line with 38 seconds to spare, improving the Greyhounds to 8-12-1-0. Hamilton falls to 9-12-1-0.
GAME CENTRE

SUDBURY 4, OSHAWA 1
Christian Purboo stopped 45 of 46 and Quinton Byfield (15, 16) scored a pair of goals as the Sudbury Wolves got a lead and, this time, didn’t allow the Oshawa Generals to get back into the game. Purboo earned first star honours, helping Sudbury win despite being outshot 46-29 while Kosta Manikis (3) and Macauley Carson (5) tacked on Wolves markers in the third period. Oshawa’s Allan McShane (6) provided the lone goal for his club while goaltender Zachary Paputsakis made 25 saves in the loss. Sudbury climbs to 14-8-0-0, carving out a five-point cushion atop the Central Division while Oshawa falls to 14-4-0-1.
GAME CENTRE

FLINT 6, LONDON 1
The London Knights had their hands full against the visiting Flint Firebirds, who scored five unanswered goals in a lopsided 6-1 decision at Budweiser Gardens. A wrist shot from Arizona Coyotes prospect Dennis Brusby (3) got the Firebirds on the board nice and early, but London’s Alec Regula (8), who recently signed a three-year deal with the Chicago Blackhawks, spoiled the Firebirds’ lead just 1:27 into the second. Flint didn’t waste any time jumping back on top, as Jack Phibbs (6) scored just over a minute later. The Firebirds were successful in keeping the Knights off the scoreboard for the remainder of the game. Belarus native and top scorer Evgeniy Oksentyuk (9, 10) led with two of the Firebirds’ next four goals while Ty Dellandrea (8) and Jake Durham (10) also lit the lamp. Flint now jumps to first place in the West Division with a 13-6-0-0 record, tying Saginaw’s 26 points.  London now falls to fourth place in the Midwest Division and will look to shake this one off before they face the Kitchener Rangers on Sunday afternoon. Flint will host the Ottawa 67’s Saturday night.
GAME CENTRE

MISSISSAUGA 6, SARNIA 2
The Mississauga Steelheads put consecutive losses behind them as sophomore forward William Portokalis (1, 2) enjoyed his first career multi-goal effort while St. Louis Blues prospect Keean Washkurak (6, 7) also netted a pair in a 6-2 win over visiting Sarnia. Steelheads captain Liam Ham racked up a career-high four assists while Ty Collins (5) scored his first with the Fish. Dallas Stars prospect Thomas Harley (10) became the first OHL blueliner to hit double-digits in goals this season. The Steelheads peppered Sarnia goaltender Jordan Kooy with 50 shots while surrendering just 26. Ryan Roth (10) scored to record his 100th career OHL point while Jamieson Rees (11) also capitalized for the Sting who saw their five-game winning streak come to an end. The Steelheads win at home for the first time since October 18th, improving to 6-12-0-0 while the Sting fall to 10-9-0-0.
GAME CENTRE