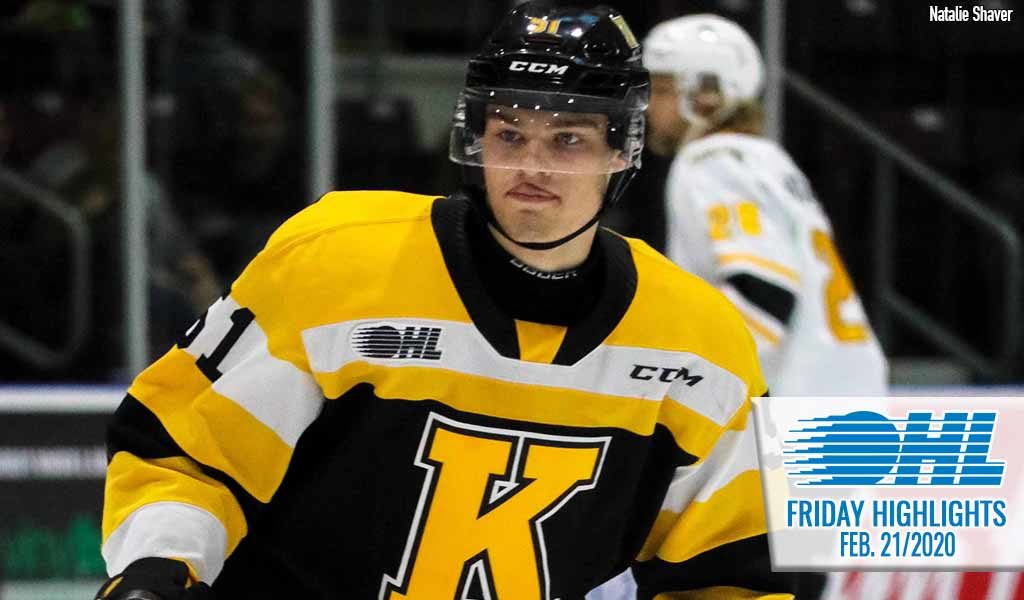 KINGSTON 4, OSHAWA 3 OT
Shane Wright’s 35th goal of the season came 1:25 into overtime to earn the Kingston Frontenacs a 4-3 win over the visiting division rival Oshawa Generals to move past the Niagara IceDogs and into the eighth and final playoff spot in the Eastern Conference. Kingston’s Nick Wong (13) traded first period goals with Oshawa’s Giovanni Vallati (1), a Winnipeg Jets pick, until the Fronts responded with two more from Jordan Frasca (4) and Dustin Hutton (6). Rookie Brett Harrison scored his 20th of the season and was followed up by one from Jacob Winterton (7) to bring Oshawa up to speed for a tie game. Wright’s OT winner came on the power play to extend his point streak to its 10th game. Christian Propp stopped 46 of 49 shots in net for the Fronts and Jordan Kooy totaled 26 saves on 30 attempts. The Frontenacs snap a five-game losing skid and improve to 18-33-2-2. The Generals’ point streak lives to see its fifth game as their record hits 28-18-5-4 on the year.
GAME CENTRE

OTTAWA 5, SOO 4 OT
Joseph Garreffa (29, 30, 31) completed his second hat-trick of the season in overtime as part of a five-point performance to snap Ottawa’s three-game losing skid in a back and forth 5-4 defeat of the Soo Greyhounds. Garreffa scored 1:06 in and traded first period goals with NHL Draft eligible Jaromir Pytlik (19) for an early 1-1 tie. Ottawa’s Mitchell Hoelscher (31) and Sault Ste. Marie’s Tanner Dickinson (7) struck next, as did Garreffa and Joe Carroll (20). Austen Keating (29) brought the 67’s ahead within the third period’s opening minutes but Rory Kerins (29) would tie things up once again as the final minute counted down. Garreffa then scored 1:25 into the extra frame to secure victory on the road. The overage forward also managed to surpass the 300 career point mark on the night. The Greyhounds outshot the Barber Poles 30-29 and continue to sit ninth in the West Division with a record of 25-28-3-1 while the 67’s remain atop the league standings and see their record climb to 43-10-0-1.
GAME CENTRE

KITCHENER 4, ERIE 3
The Kitchener Rangers officially earned their spot in the postseason, edging the visiting Erie Otters in a 4-3 contest. Austen Swankler (14) opened the scoring for the Otters and Jonathan Yantsis (35) responded with Kitchener’s early tying goal before top NHL Draft prospect Jamie Drysdale (8) once again gave Erie the advantage. The Rangers earned three in a row throughout the second period thanks to Declan McDonnell (19), Francesco Pinelli (17) and Dallas Stars prospect Riley Damiani (25). McDonnell’s 19 goals are the most by a Rangers rookie since Radek Faksa scored 29 back in 2011-12. Erie’s Chad Yetman (34) managed to bring his team within one, but they’d be ultimately prove unable to catch up. Los Angeles Kings draftee Jacob Ingham stopped 30 of the 33 shots that came his way between the Kitchener pipes and rookie netminder Aidan Campbell totaled 21 stops on 25 attempts. The Rangers clinch at third in the Western Conference and see their tally on the year bump up to 35-14-5-2 while the Otters remain eighth in the conference as their record drops to 23-21-4-7.
GAME CENTRE

FLINT 6, MISSISSAUGA 3
The Flint Firebirds’ winning streak hit game number 15 as they doubled up on the host sMississauga Steelheads 6-3 in a performance that included a pair of from Jack Wismer (23, 24). The Birds came flying with four straight off the sticks of Riley McCourt (18) and St. Louis Blues prospect Tyler Tucker (16) on the power play, as well as Marcus Gretz (1) and rookie Brennan Othmann (15). The Fish eventually came alive with three in a row from Duncan Penman (8), William Portokalis (8) and fellow St. Louis Blues pick Keean Washkurak (18) before Wismer’s two late goals, including one on the empty net, were earned to secure the three goal cushion. Mississauga netminder Kai Edmonds capped off the night with 36 saves on 41 shots while Anthony Popovich shut down 34 of the 37 he faced. The Firebirds remain atop the West Division and improve to 37-17-1-1 while the Steelheads fall to 24-27-4-1 at seventh in the Eastern Conference with a fourth straight loss. Firebirds head coach Eric Wellwood became the winningest coach in club history with his 53rd win behind the Flint bench.
GAME CENTRE

GUELPH 5, LONDON 3
Montreal Canadiens prospect Cam Hillis (22) scored with just 51 seconds left and Eric Uba (24, 25) potted a pair of his own to help propel the Guelph Storm past the leading London Knights in a back and forth 5-3 decision. Following a quiet first period, London’s Alec Regula (23) opened the scoring early in the middle frame. Uba responded just over two minutes later before Regula’s (24) second on the night brought the Knights back in front. Pavel Gogolev (39) and Matthew Papais (9) pushed Guelph ahead until Regula, a Chicago Blackhawks blue line prospect, completed the hat-trick (25) to tie the score at 3-3. Hillis would reclaim the Storm lead with the game winning goal in the game’s final minute before Uba would add insurance on the empty net. The shots concluded at an even 35 on both ends of the ice. The Storm see their point streak reach a seventh game as they win their fifth in just as many, snapping London’s win streak for the second time this month. The Storm bump up to 29-19-2-5 at sixth in the Western Conference, while the top seeded Knights drop to 38-15-1-1 on the year.
GAME CENTRE

SAGINAW 10, SUDBURY 6
Camaryn Baber (7, 8) and Minnesota Wild prospect Damien Giroux (36, 37) both scored twice and 10 different Spirit skaters boasted multi-point showings as the Saginaw Spirit toppled over the hometown Sudbury Wolves by a score of 10-6. The Spirit scored five in a row off DJ King (5), Carolina Hurricanes pick Ryan Suzuki (16), Baber, Ilya Solovyov (5) and Danny Katic (11). Top NHL Draft hopeful Cole Perfetti became the second OHL player to nab his 100th point on the season with an assist on Solovyov’s goal. The Wolves were able to climb within one with markers from Jack Thompson (13), Nolan Hutcheson (11), Macauley Carson (19) and Buffalo Sabres prospect Matej Pekar (26), but Giroux responded 24 seconds later to widen Saginaw’s lead. Owen Robinson (13) came back with another for Sudbury and then New York Islanders pick Cole Coskey (31) did the same for Saginaw, scoring the fourth goal in less than a minute and a half to bring the score to 7-5. Hutcheson (12) scored his second on the night to bring the Spirit back with one, but three final goals off the sticks of Giroux, DJ Busdeker (17), and Baber would cap off the explosive win. The shots ended 38-32 in favour of the Spirit, whose record bumps up to 35-16-3-2 as they remain fourth in the Western Conference. The Wolves fall to 29-26-1-0, continuing to hold on to the Central Division’s top spot. Quinton Byfield remained out of the lineup with an injury. He hasn’t played since Feb. 7th.
GAME CENTRE