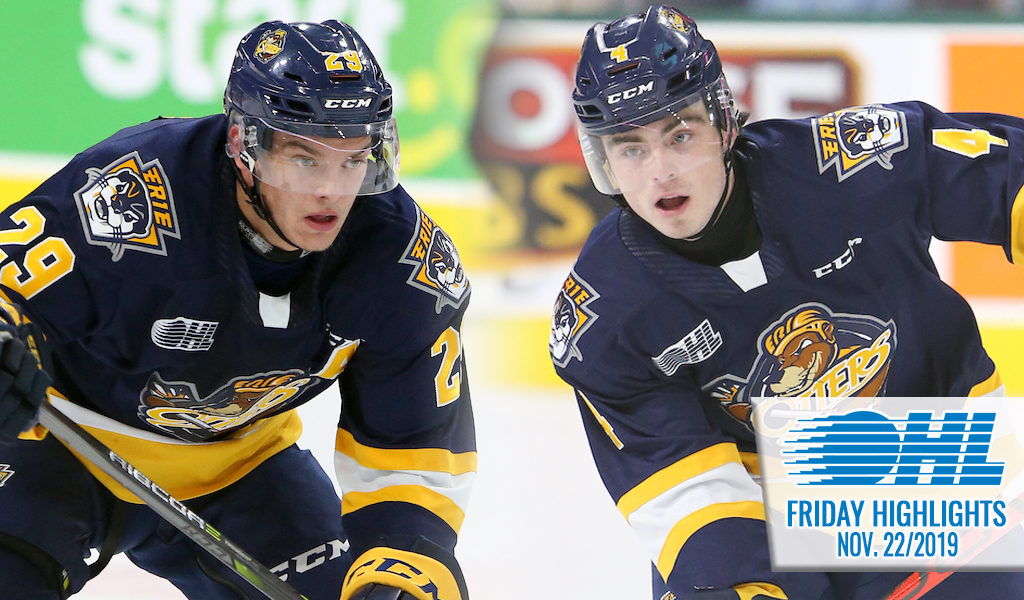 ERIE 4, OSHAWA 2
Chad Yetman’s (16, 17, 18) second career hat-trick guided the Erie Otters to 4-2 victory in Oshawa. Brett Neumann (17) and Oliver Suni (7) scored big ones for the Gens and a disallowed goal midway through the third period almost tied things up at three goals apiece. Yetman’s third goal came with 7:07 remaining in the third period and would ultimately give the Otters a 4-2 lead. Defenceman Jamie Drysdale, whose name has come up in many 2020 NHL Draft discussions, collected four assists on the night while Brendan Sellan (4) rounded out Erie’s goal-scoring. Oshawa goaltender Andrew MacLean faced 43 shots, while Daniel Murphy saved 26 of the 28 shots that came his way. This is the Otters’ first game since Nov. 9 that has concluded in regulation. The Otters are now tied with the Guelph Storm for 29 points and sit in the Midwest Division’s second place slot. Oshawa’s 31 points and 15-6-0-1 record places them at third place in the East Division behind Ottawa and Peterborough.
GAME CENTRE

GUELPH 3, SARNIA 0
The Guelph Storm’s 10th straight win came in a 3-0 decision over the visiting Sarnia Sting. Eric Uba (5, 6) opened the scoring with 6:53 left in the opening period. Uba, who was acquired from the Flint Firebirds in the offseason, scored his second of the night early in the second period, while second-year winger Matthew Papais (2) followed suit 3:05 into the third period. The Storm put 39 shots on Sarnia’s Ethan Langevin, while Guelph’s Nico Daws stopped all 17 that came his way. The Storm haven’t lost a game since October 20th, while the Sting will look to bounce back at home when the Soo Greyhounds come to town on Sunday afternoon. Guelph sits tied with Erie atop the Midwest Division, owning a 13-4-1-2 record.
GAME CENTRE

FLINT 4, SOO 3
Veteran defenceman Riley McCourt (7, 8) scored twice and added an assist to lead the Flint Firebirds past visiting Sault Ste. Marie 4-3. The Firebirds struck early with a goal from McCourt, but rookie Jacob Holmes’ second of the season evened things up soon after.  The Firebirds responded with three more, including another off McCourt’s stick while Ethan Keppen (8) and Jack Wismer (6) also capitalized. The Greyhounds didn’t waste any time scoring another two goals from Jaromir Pytlik (10) and Tye Kartye (10) to cut Flint’s lead, but a scoreless third period would give the Firebirds the edge. Luke Cavallin stopped 35 of the Greyhounds’ 38 shots, while Bailey Brkin totaled 31 saves. The Firebirds maintain their third place spot in the West Division at 13-8-0-0, and the Greyhounds’ 9-13-1-0 record keeps them in fifth.
GAME CENTRE

HAMILTON 4, NORTH BAY 0
Zachary Roy earned his second career OHL shutout Friday night as the Hamilton Bulldogs blanked the North Bay Battalion 4-0. The Bulldogs’ star power was on full display with three-point nights for Arthur Kaliyev (26, 27) and Jan Jenik. Jenik, drafted by the Arizona Coyotes 65th overall in 2018, has now scored a point in 22 consecutive games, and, tied with teammate Kaliyev, rounds out the second-most points in the league with 49. An early third period goal from Logan Morrison (9) stretched the Bulldogs’ lead to 3-0, before Kaliyev finalized the score at 4-0. Roy stopped all 31 shots that came his way opposite North Bay’s Joe Vrbetic who turned aside 24. The Bulldogs improve to 11-13-1-0 and remain fourth in the East Division with 23 points. The Battalion drop their ninth in the past 10 games to fall to 4-19-0-0.
GAME CENTRE

KINGSTON 5, SUDBURY 3
For the second night in a row, Kingston rookie Shane Wright (7, 8) and leading scorer Zayde Wisdom (13) both played integral roles in carving out a win for the young Frontenacs. Wright’s two goals helped lift the Fronts to a 4-2 victory over the Central Division-leading Sudbury Wolves on home ice. Coming off a two-goal game the night before, Wisdom (13) had a three-point night that included a goal with just six seconds left on the clock. Nick Wong (7) and Lucas Rowe (5) also scored Kingston goals while Christian Propp made 29 saves to earn his first win as a Frontenac. Shane Bulitka (12), David Levin (10) and Jack Thompson (9) scored Sudbury goals as the Wolves lost their third straight. Sudbury falls to 14-10-1-0 on the season, while Kingston earns their third consecutive win and fourth regulation of the season to improve to 4-14-2-2.
GAME CENTRE

LONDON 5, KITCHENER 1
A hat-trick from OHL scoring leader Connor McMichael (21, 22, 23) led the London Knights past the Kitchener Rangers 5-1 on home ice. Luke Evangelista (7) banged the puck off a Kitchener defender to open the scoring, before McMichael scored two in a row to widen the Knights’ lead. Ottawa Senators prospect Jonathan Gruden (8) was London’s other scorer, before McMichael notched his third of the night to record his third hat-trick of the campaign. Greg Meireles (4), a Florida Panthers draft pick and fourth-year Ranger, was Kitchener’s lone scorer. A scoreless third period would hand London its third straight win as the Knights improved to 13-5-1-1. Knights rookie Brett Brochu made 32 saves in the victory as Kitchener outshot London 33-24. The Rangers dropped their third straight contest and eighth in the past 10 games, falling to 7-9-2-2.
GAME CENTRE