From Worst to First: The Rangers’ Reset 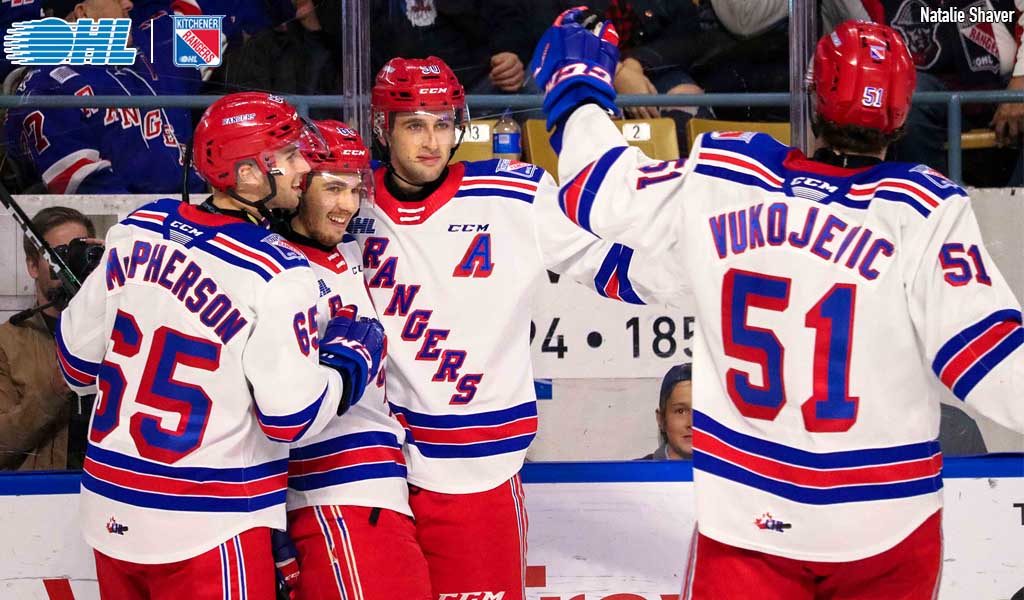 The Kitchener Rangers have turned things around.

They play a heavy possession-style game that entails moving the puck quickly through the neutral zone. Their play goes beyond just a dump-and-chase approach. They’re playing with skill.

It’s an approach comes with hard work, especially in the defensive zone. They’re attacking the puck and trying to create separation. They’re using their speed more, leading to quicker transitions, which lends itself to a strong offence, because it’s easy to play in the o-zone when you’re playing quick.

They have the puck on their stick more often, so naturally, they’re scoring more goals. They’re playing a faster game, are having an easier time of breaking into the zone, and they’ve been able to win on a consistent basis.

The @OHLRangers are the new number one team in the Western Conference having won 20 of their last 23 contests.

That and more in the #OHL Weekend Notebook.

It’s a changed system, and it’s working. In the span of less than two months, the Rangers have clawed their way from last place in the Western Conference to the very top.

It may be a changed system, but there’s something they’d like to make clear: they’re not a changed team. They’re just playing like the strong group they know they’ve been all along.

All it took was a reset.

“We were kind of going in with the mindset that we’re 0-0 right now and that this is a new season,” remembered head coach Mike McKenzie.

So, at the bottom of the Conference, they started from scratch, and from there, the team bought in.

Now, months later and on the upswing, to what or to whom do they owe their success to?

McKenzie credits a newfound sense of purpose as the essence of their turnaround.

“They’ve seen what hard work does,” he said. “It sounds cliché to say but I think they’re buying into that, and it’s gotten to the point now where if you’re not working hard at practice or at the gym you kind of stick out in a negative manner. Nobody wants to be that guy.”

“What’s working now is we’ve been playing as a team,” said the 19-year-old netminder. “At the start, we wanted to play as a team, but there’s a difference between wanting it and actually doing it.”

And once the wins started coming, so did the confidence, and the belief in the team’s ability.

“We started to get bounces and we started to click all over the ice,” pointed out Riley Damiani, who shares the captaincy with teammate Greg Meireles. “When you’re playing with confidence, you’re playing an easier game. We just started winning some hockey games and after that, everything was going our way.”

The upswing started with a 5-4 shootout win over the Midwest Division rival Erie Otters. It was a tightly fought match that could have gone either way.

“Looking back on it, if they score a late goal with a minute or two left and we lose that game, or even if we lose in a shootout or in overtime, maybe things go differently,” said McKenzie.

“That’s my first game. We want it to go well as coaches, as a staff. We want to win. You really want that first game as players too. So it was good to get it, even though it was a close game.”

Things soared from there. Dating back to that fateful game on Nov. 28, the Blueshirts hold a 20-1-2-0 record.

It’s easy to work hard when you’re winning, that goes without saying. Positivity breeds confidence, and that confidence has seamlessly translated into wins. Like a cycle, consistent winning means everyone remains positive. Overage winger Jonathan Yantsis can attest to that.

“It’s definitely a lot easier to play out there when everyone’s having fun and nobody’s stressing or gripping the stick a too tight,” said Yantsis. “There’s confidence in our system that it’s going to work every game. We changed a couple things a couple months back and ever since then, we’ve really come together as a team.”

The major change came on the coaching side. At the beginning of his fourth term with the squad, Jay McKee was relieved of his duties in late November, and McKenzie, the club’s general manager, stepped in to fill the open spot.

“You never want to make a change like that. It’s a last resort,” said McKenzie. “But sometimes change can bring positives as well.”

On the surface, it appears to have been a crucial piece of that much-needed reset. With a new coach came the aforementioned system. It’s a style that has allowed their skilled forwards up front in Yantsis, Meireles, Damiani, and Liam Hawel the opportunity to shine, and a system that has provided the younger guys with even more confidence.

“Being one of the younger players isn’t the easiest thing, but Mike has really given them the confidence and has shown he believes in them, and when you have that belief from your coach, it really helps,” said Yantsis.

The belief in McKenzie’s system spanned the entire team. It became obvious that it wasn’t too late to fix what was wasn’t working.

He’s got a nose for the net, and the way he’s scoring right now, @jonny_yantsis might be smelling another 5️⃣0️⃣🚨@OHLRangers winger bagged his first hat-trick of the season as the Blueshirts picked up a point on the road 🎩🎩🎩 pic.twitter.com/pB7dewXMiy

“We gain a lot more speed through our new system,” said Damiani, one of the team’s two captains. “There’s a different coaching style in the room. It was a good change for our group and it’s been working up until this point. We just have to stick with it.”

The team also welcomed power forward Serron Noel to the forefront at the trade deadline. His combination of size and speed fits in nicely with the Rangers’ style of play.

“He brings us to the top six and makes our team a lot deeper when all four lines can play and produce,” said Yantsis.

On the backend, McKenzie gives credit to Michael Vukojevic’s game.

The team also acquired Ingham from the Mississauga Steelheads in the offseason. On the ice, it’s obvious what he’s brings. He’s a top goaltender with top-five numbers and the league’s second-best save percentage of .925.

It’s what he’s brought off the ice that has perhaps been the biggest boost. According to McKenzie, his presence is what the team had been sorely lacking.

“When he’s in the dressing room, he brings a presence of professionalism, hard work, and maturity that we really missed when he was gone,” said McKenzie.

And helping their cause is having a healthy Ingham between the pipes. A back injury kept the Los Angeles Kings prospect out of the lineup for most of November. Since his return, he’s been among the best goaltenders in the entire league.

“Even on games when he isn’t starting, just having him in the room is a huge factor for us. Then, when you couple that with how good he’s been on the ice. It’s kind of a double whammy in terms of a really positive guy to have on our team.”

Now, atop the conference, the Rangers’ focus lies in avoiding complacency, not taking winning for granted, and honing in on any improvements that can still be made along the way.

“We try to break down every mistake we made, even in wins, and just prepare for every game like it’s a playoff game,” said Damiani.

The message from the coach is to keep it simple, and to avoid any mixed messages or confusion in terms of what the team is trying to accomplish.

Perhaps that purpose means remembering where they’d been a couple months ago, and the process of digging themselves out of that hole. It’s not a place any team wants to be, but the silver lining that Damiani takes out of the experience is that there was nowhere to go but up.

“We’re hot right now and I think even more special things are to come.”

He also points to his GM’s presence on the ice as another necessary fire lit under the team to help them get back in gear.

“When you have your GM come down from the press box and take over the bench, it’s a little more intimidating. You just have to bring it all the time with him, and that’s been good.”

Yes, things have been good. The players are clicking, the lines are producing, and individually, everyone’s playing well.

“We just needed to string together a couple good games and get our confidence back up.”

And speaking of good games, it may have just been one game, but McKenzie also can’t help but think back to that match with Erie, had things not gone in their favour.

“What would’ve happened if we had lost that game?” he asked out loud.

“It’s kind of a weird way to think, but maybe things don’t go as well, or we don’t go on that streak. We kind of grinded out that game, and then from then on out, there was a newfound confidence that we were going to be good and it just kind of kept rolling along.”