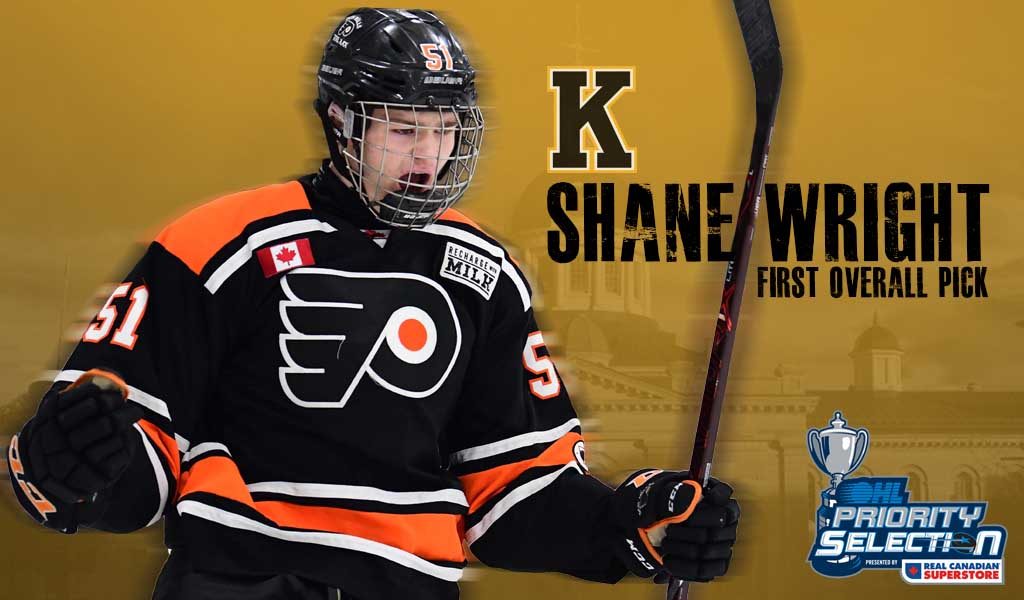 Toronto, ON – The Ontario Hockey League in association with the Kingston Frontenacs Hockey Club today announced that 15-year-old forward Shane Wright of the Greater Toronto Hockey League’s Don Mills Flyers will be the first overall pick in the 2019 OHL Priority Selection presented by Real Canadian Superstore.

“There is a reason Shane was granted exceptional player status,” said Kingston Frontenacs General Manager Darren Keily. “It starts well before he plays the game; Shane is an exceptional person, with exceptional character, from an exceptional family. His hockey is part-in-part with that, and he will be a great asset to our club. That’s what separates him from others.”

Wright was named the GTHL Minor Midget Player of the Year after producing a league leading 150 points in 72 games including 66 goals and 84 assists.  He led a Flyers team that went undefeated in regulation play capturing a league title and OHL Cup powered by Under Armour championship.  He earned MVP honours on minor midget’s greatest stage with 18 points in seven OHL Cup contests including an assist on the overtime winner in a dramatic 6-5 victory against the Toronto Red Wings to finish just one point shy of McDavid’s 2012 record.  The 6-foot, 179-pound centreman led the showcase with a plus-16 rating, was 66.4 percent in the faceoff circle, and finished with the event’s fourth highest total of 29 shots on goal.  Wright also represented Ontario at the 2019 Canada Winter Games serving as team captain and earning a silver medal.

“Shane is one of the most gifted and talented players to come along in a number of years,” said OHL Director of Central Scouting, Darrell Woodley. “He has a combination of skill, speed, hockey sense and determination that really separates him from his peers. He is an explosive and powerful skater that can reach top speed quickly and can change gears in mid-flight to catch defenders flat footed. Shane’s skill and offensive instincts are second to none possessing vision and creativity with the puck that is truly fun to watch.”

Wright is the 2019 recipient of the Jack Ferguson Award presented annually to the player selected first overall in the OHL Priority Selection. The “Fergie” recognizes the dedication and contributions made by Jack Ferguson during his 25 year association with the OHL, first as a scout with the Ottawa 67’s and followed by his appointment as head of the OHL’s Central Scouting Bureau in 1981 as its Director of Central Scouting.  Wright is the first member of the Frontenacs to receive the award but is the third player in Kingston’s all-time franchise history with the first overall distinction following Drake Berehowsky chosen number one by the Kingston Raiders in 1988, and Bryan Fogarty of the Kingston Canadians in 1985.

Learn more about Shane Wright, the ‘Exceptional Player’ in a four-part video feature:

Wright and his family will be the featured guests on a special edition of the Frontenacs This Week podcast. The podcast will be available this afternoon on the Kingston Frontenacs website www.kingstonfrontenacs.com.

He will also be a feature guest on the live 2019 OHL Priority Selection Draft Show presented by Real Canadian Superstore beginning at 9:00 am on Saturday April 6, 2019.  The draft show along with live results feed will be available at www.ontariohockeyleague.com.  For the twelfth straight year, media and fans can watch the first three rounds live online with host Terry Doyle who will be joined on set by Darrell Woodley and Tim Cherry of OHL Central Scouting to provide analysis, interviews, and video footage of the next wave of OHL stars.