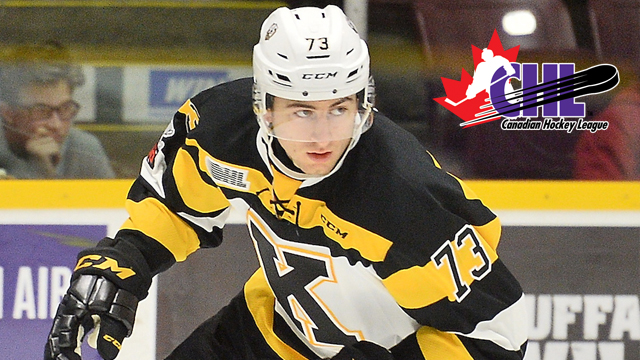 Toronto, ON – The Canadian Hockey League today announced that Los Angeles Kings prospect Gabriel Vilardi of the Kingston Frontenacs is the CHL Player of the Week for the playoff week ending April 1 after recording 10 points in three games scoring five goals and five assists with a plus-minus rating of plus-4.

Vilardi’s trio of multi-point performances helped the Frontenacs win the final three games of their first round playoff series against the North Bay Battalion to advance to the OHL Eastern Conference Semi-Finals for the third straight year.  Vilardi scored the series clinching goal in triple overtime of Game 5 on Saturday ending the third longest game in OHL playoff history at 114:05.  The goal was part of a four-point effort that also included the game’s first goal on the power play earning him first star honours in the 6-5 triumph.  His week also included two goals and one assist as second star of a 4-1 win in Game 3 on Tuesday, then one goal and two assists as third star of a 6-3 victory in Game 4 on Thursday.  The Frontenacs will now face the Barrie Colts in second round action beginning Wednesday.

An 18-year-old from Kingston, Ont., Vilardi is playing in his third OHL season and first with his hometown Frontenacs after being acquired from the Mastercard Memorial Cup champion Windsor Spitfires in January.  The second overall pick in the 2015 OHL Priority Selection and 11th overall pick in the 2017 NHL Draft is currently second in OHL playoff scoring with 12 points through five games after producing at an impressive 1.81 points-per-game rate during the regular season with 22 goals and 36 assists for 58 points in just 32 games after returning from injury.